August 31 is an important date in the Ripple v SEC case. In theory, it can affect the XRP price. We are sure you remember how the price collapsed earlier after the announcement of the trial in December last year. And then what a steep rise it was when Ripple’s lawyers won important courtroom victories this spring.

But now everything has somehow calmed down, XRP practically does not notice the news and most of the time it moves after the entire market. Will this trend change on August 31 and is it worth waiting for XRP growth.

As a rule, all forecasts for XRP are very positive. We will not deny that the coin has a certain potential. But there is a big difference between having the potential and putting it into practice, and right now, the strengths of XRP buyers seem to us not as confident as we would like.

First of all, we will open the global XRP chart on a weekly timeframe and there we will see that the coin has been in a downtrend since January 2018: 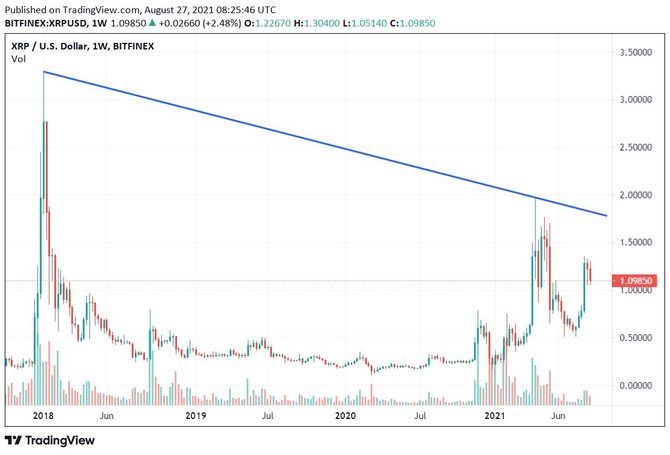 As much as we would like it, but so far the highs of the last cycle have not been reached, and it should be noted that XRP is not the only altcoin that has not coped with this task at the moment. At one time, bitcoin broke a similar trend, Ethereum did it successfully, and Cardano trampled it altogether. But in XRP, the global drop is still in place. On the good news, now, to break the trend, it is enough to exceed only $ 1.7, and this may be the beginning of a strong impulse that will raise the rate above $ 3.4, that is, the current ATH.

Will we be able to reach this border soon? The same weekly chart shows that the short-term downtrend has been broken and the market is bullish.

According to MACD, it is not yet clear how strong the buyers are, even though the ball is in their half of the field, but the RSI hints at their weakness, which makes us think about further correction. The target for it is $ 0.9, although the $ 1 level is psychological and it will probably be held hard. But if the rate drops even lower, then $ 0.6 is seen as a good level, where the 50-week moving average passes and this level has provided strong support since August last year.

There is, of course, a bullish scenario, after all, XRP is now above the falling trend and you can push off from this line and move up. Here is one trader has already drawn an approximate scenario when the price can go back to $ 1.5:

On the daily chart, we see that the coin was overbought and now the bulls need rest: 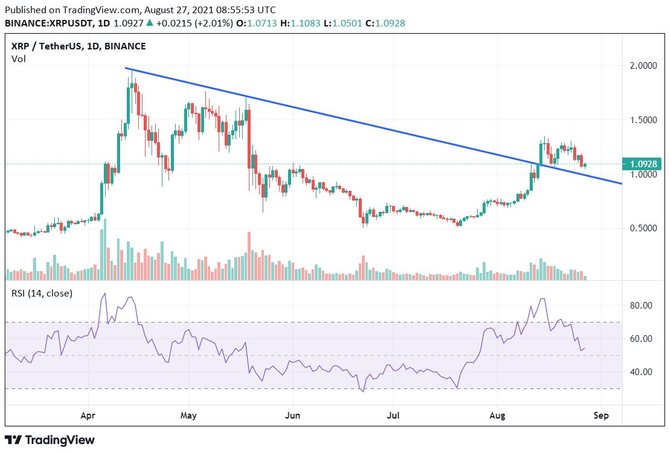 The same trend with the possibility of a rebound from it upwards, according to the relative strength index, we are still far away for good entry points, which were in June and July at a price of $ 0.5. But there may be enough strength for one more impulse, and if the growth goes, then the first resistance will be met by the rate at $ 1.3. The fact that it may be is also indicated by the four-hour chart, where the RSI is one step away from the zone when XRP becomes undervalued: 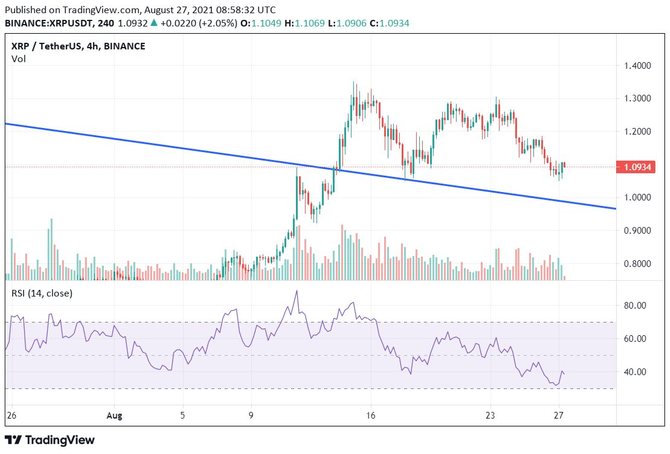 Do not forget that when we look at the price of altcoins, it is always worth looking back at bitcoin and at this point in time the bears are trying to drag it for a correction to $ 45,000 or even lower. This state of affairs will hit the entire market with virtually no exceptions.

First, a little about the interesting movements of XRP tokens. Coinbase, which halted XRP trading during the trial, has transferred 256 million tokens between its internal wallets. Rumors have already spread on the network that the exchange intends to resume trading, but similar rumors were launched earlier, and so they did not lead to anything. So far, only one thing can be said for sure that the exchange owns the cryptocurrency, and since it has not got rid of it, therefore, it is considering returning to trading in the future. The translation itself is most likely related to security.

Much more interesting is another transfer of 100 million XRP from Binance to Huobi.

The transaction looks like a purchase, but it is not clear why a large exchange has so much funds, especially considering that Huobi has always been considered a Chinese platform and there they do not like cryptocurrencies at all and they temporarily stopped providing services to the inhabitants of China.

Another piece of news concerns Ripple’s new plans to defend in court. They indicate the presence of an appeal to the SEC of one of the XRP buyers on the subject that he bought currency or stocks. To which the regulator replied that they could not give a classification.

It is important that this was in October 2020, that is, literally a couple of months before the SEC accused Ripple of selling unregistered securities.

It is necessary to make a remark that the events concerning this trial are unfolding in an extremely strange way. The SEC, instead of giving the court evidence of Ripple’s guilt, is doing nothing. In turn, Ripple’s lawyers do not prove that XRP is not a security and the SEC is wrong, they are worth defending, allegedly on the fact that the regulator itself cannot yet fully determine the status of various cryptocurrencies.

And their second trump card, allegedly Ripple did not know about the violation of the law, because the SEC did not warn them about it in time. We remember the old adage that ignorance of the law does not excuse one from responsibility. But, apparently, in America, justice works on a slightly different principle, at least in matters related to finance.

In total, from January to August, we watched a series where the SEC constantly promises to prove the guilt of Ripple, and the company’s lawyers claim that the SEC themselves do not know what they are going to prove. At the same time, the parties have taken tough positions and are not going to go for an early settlement. Although at the very beginning of this story, Ripple was going to quickly close the issue, but apparently, the SEC does not agree to just a fine, and what they want, Ripple cannot give or do not really want to do it. By the way, there were even hints that Ripple may have to destroy its own XRP reserves, if necessary. This was voiced personally by Brad Garlinhouse, the head of the company, in an interview. And if that happens, it will be very bullish news for the market.

This series is slated to end on August 31st when the submission deadline is due.

#XRPCommunity #SECGov v. #Ripple #XRP Below is a summary of upcoming events and outstanding items. pic.twitter.com/u8I9zYb8eD

It is possible that the SEC may want to extend it, but if the court takes the side of Ripple and moves on to the next stage of consideration of the case, then this will be very good news, because investors will perceive it as that the SEC did not have time to collect enough evidence and, therefore, Ripple will win with no problem.

Will there be growth in this case? We think that the chances for it are good and we have designated the first targets at $ 1.3 and $ 1.5. Then everything will depend on the event itself and the current state of the entire cryptocurrency market. Recall that if Bitcoin does not hold current levels and goes lower, then even before August 31, XRP may see a drop to $ 0.9, and maybe even lower.