Bitcoin rate has grown almost 10 times over the year. At the same time, the balances of the main cryptocurrency on the crypto exchanges decreased from 3 million to 2.4 million. At first glance, the trend seems counterintuitive. When a cryptocurrency rises in price, investors withdraw it, instead of replenishing exchange wallets. Bit.News has collected several reasons that answer the question: why a fall in crypto exchange balances can be a signal of a growing market.

Market Participants Are In No Hurry To Sell Bitcoin

Therefore, when long-term investors are waiting for the growth of bitcoin, they withdraw their assets from “hot” cryptocurrency wallets to “cold” ones.

Large holders accumulate bitcoin on wallets with a balance of 100 to 1000 coins – since the beginning of the year, the amount of cryptocurrency on them has grown by about 200,000 BTC. 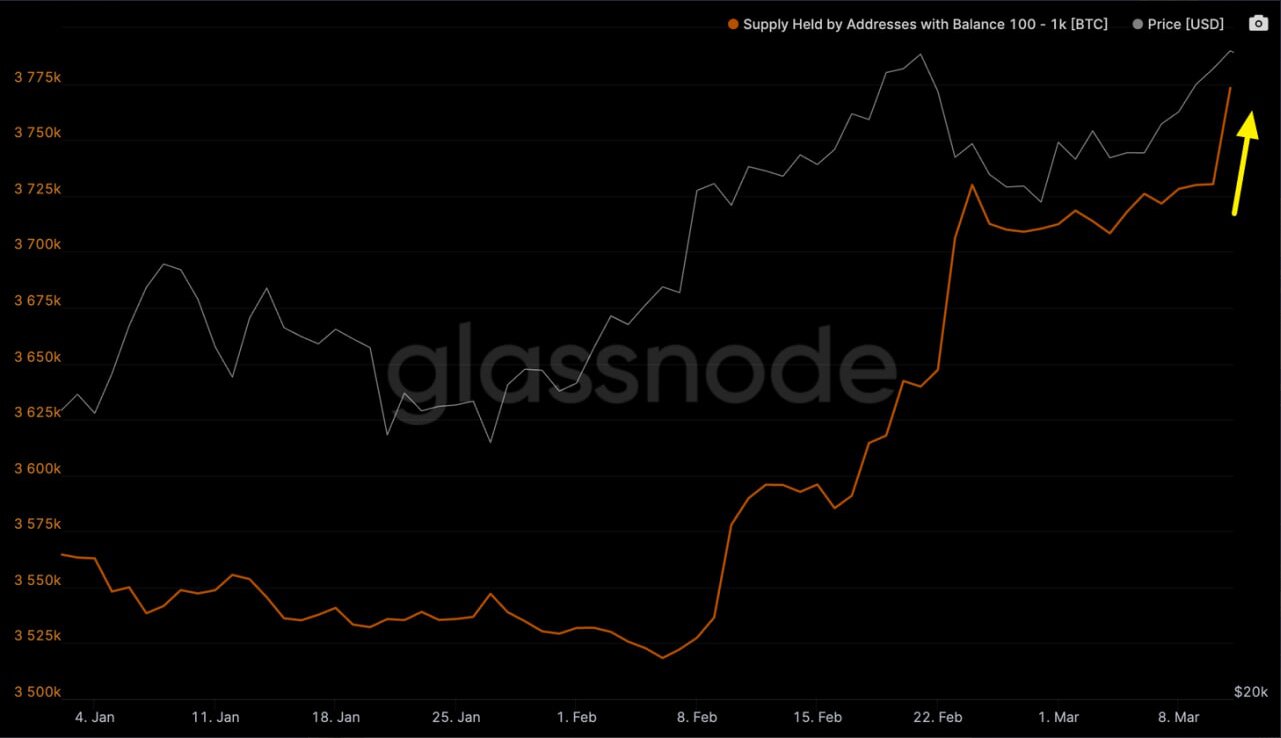 Supply-Adjusted Coin Days Destroyed (CDD) indicator testifies to the reduction of pressure on the market from long-term holders. The CDD describes the dynamics of the market by giving more weight to coins that have not moved for a long time. For all cryptocurrencies that were transferred during the selected period, the sum of the products of the value of the digital asset for the number of days that it did not move is calculated. Since CDD accumulates over time, it is considered adjusted for the supply, which also grows over time.

CDD curve moves up if assets that have not moved for a long time are moving. Conversely, if the curve falls, which we have seen since January 2021, then long-term holders are selling less of their digital assets. 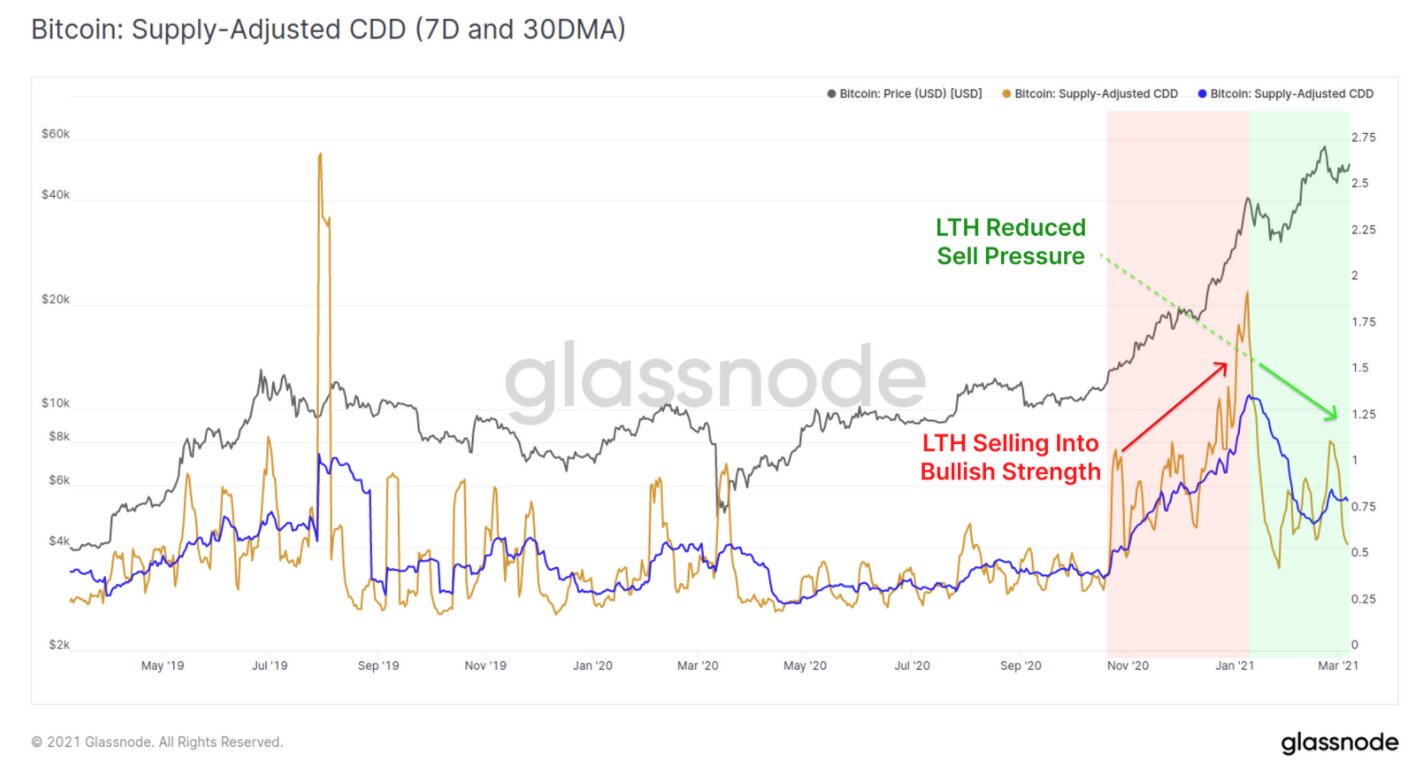 Long-term cryptocurrency holders are still selling more bitcoin than they are buying. But since January 2021, the spread between values ​​has been narrowing. It also suggests that the pressure on the market from long-term holders is falling. 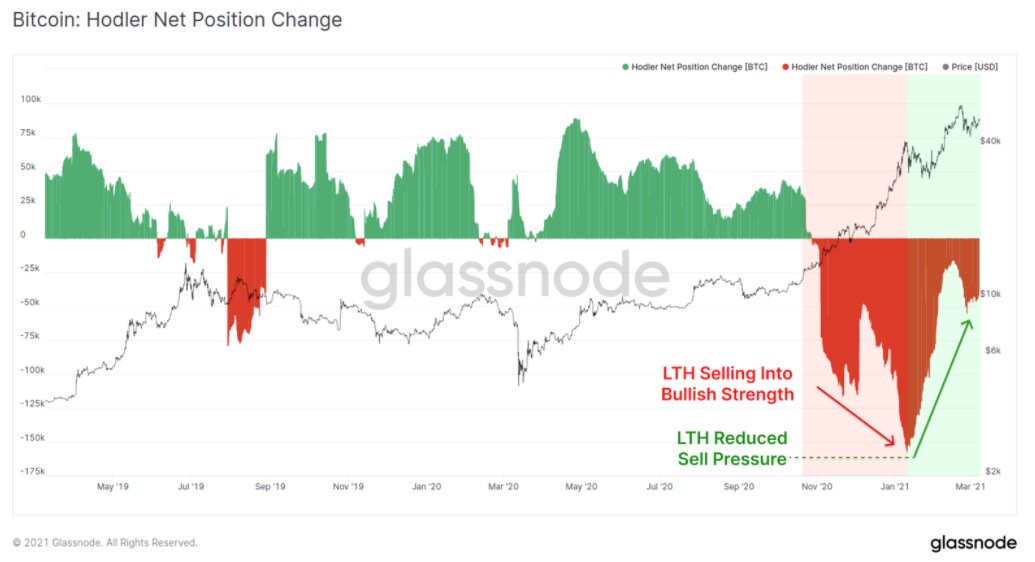 Part of BTC Hodlers Are Into DeFi Market

Over the past year, the volume of locked funds in DeFi has grown from $ 600 million to $ 44.5 billion. New projects appear, including those involved in Bitcoin tokenization. Such assets are called Bitcoin-based synthetic asset or “synthetic Bitcoin”. They allow for interaction between different blockchains – users can take advantage of the Ethereum network using BTC.

The most popular project is Wrapped Bitcoin. The WBTC token is based on ERC20 contracts and is issued at the rate of 1 WBTC for 1 BTC. Tokenized BTC can be converted to regular BTC in the same proportion.

The number of synthetic Bitcoins on the DeFi market is about 183,000 tokens. This is less than 1% of the total BTC in circulation. However, since the beginning of the year, the number of BTC in DeFi has increased by 44 thousand, and the total balance of exchanges has decreased by less than 150 thousand. These are comparable numbers.

In 2020, the volume of assets under the management of cryptocurrency funds grew by 92% over the year – to $ 39 billion.This trend may indirectly mean that new investors choose cryptocurrency funds, and do not carry money to cryptocurrency exchanges to buy assets directly. Novice investors may find it easier to trust a professional manager than to understand the intricacies of the market.

On the other hand, during the same time, the bitcoin rate has grown by 300% – many times more than the assets under management. This could mean that the growth in the assets of the funds was partly due to the revaluation.

Best Cryptocurrencies 2021: Which Coins To Invest In In April