What Cryptocurrencies Are Worth Investing In 2021: 4 Profitable Coins

Another selection of altcoins that have fundamental factors for continued growth. Today we are talking about the following cryptocurrencies: Solana, Tezos, Hedera Hashgraph, and Zilliqa.

The first is today the platform for smart contracts Solana, another “Ethereum killer”, which has been on the market since April last year, but is already among the top twenty cryptocurrencies: 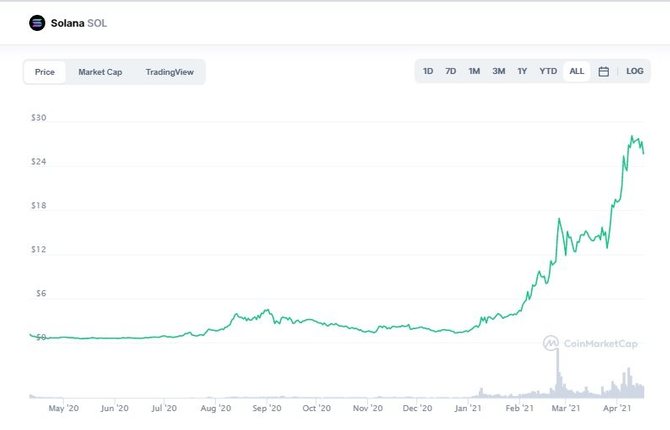 Starting with a price less than a dollar, today they give $ 25 for 1 SOL. The price rose to $ 30 at the peak. Such success largely depends on the listing on the leading crypto exchange Binance, which is clearly seen at this chart: 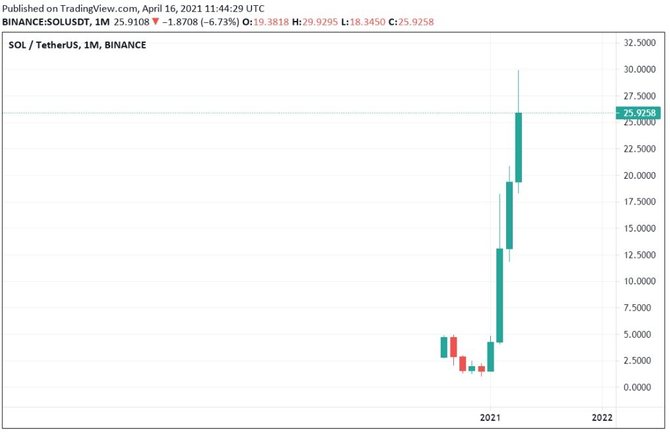 At the same time, Solana cryptocurrency is traded on other well-known exchanges such as FTX, Huobi, and others.

The peculiarity of Solana is that the blockchain claims a throughput of 50,000 transactions per second. To do this, they do not need a second blockchain layer or sharding technology. Developers solve the bandwidth problem by running smart contracts in parallel.

Stress tests show this scalability is real. A large number of applications have joined the Solana ecosystem. They explain their choice by the fact that, in addition to the high speed of work, the commissions in the network are at a scanty level and this will not change if the price of the native token rises or the number of transactions in the network becomes maximum.

The market also responds well to news that crypto exchanges and other venture capital companies that specialize in blockchain projects are investing in Solana. So at the end of March, they immediately raised $ 40 million.

Does Solana have any further growth potential? We’ll be looking at Bitcoin first, and this applies to all the coins in this article because it’s important to know that the growth cycle is not over yet.

Secondly, it is worth following the news of the project, new investments, successful developments, or an important network update can lead to the fact that within a few months the capitalization will increase two or even three times at least.

The second coin, the price of which is also at the maximum, is Tezos. This cryptocurrency has an interesting history because it could not start at all due to disagreements between the developers, which were resolved in court for a long time. But they got through these problems and the network was up and running.

Today, the blockchain is developing and looking for new partnerships, of the latter, the launch of a stablecoin pegged to the euro, focused on the French market, can be distinguished. And also the issuance of tokenized securities on the Tezos blockchain by the financial giant Societe Generale, also by the way from France.

As the saying goes, if a project is worthy, then it will find its audience, which we see on the example of Tezos. Even if in terms of capitalization they rolled back to the end of the TOP-30, the development is proceeding both in terms of updating the protocol and expanding its client base. It is also worth noting that Tezos was originally created as secure blockchain solutions for businesses. And one of his supporters and early investors is billionaire Tim Draper, who specializes in venture capital investments in startups, including cryptocurrency ones.

Talking about the price of Tezos, the prices of $ 10 and $ 15 are quite real, but there are questions about the timing of their achievement: 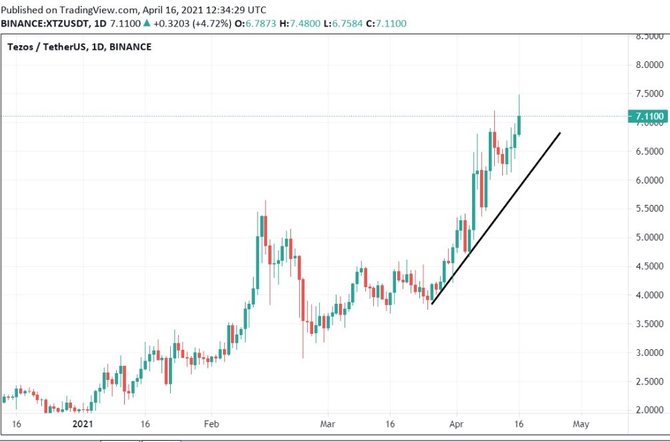 The current rate seems too high and although there is an uptrend on the chart, this is mainly due to the latest protocol updates and high-profile partnerships. Now the coin clearly needs to cool down and carry out a small consolidation before continuing to grow.

Hedera Hashgraph will be the third coin to date. The Hedera token is a key to easily create your own crypto world in one global blockchain.
Something like this can be paraphrased the slogan of the project, it is noted that more than 500 teams are already working on the development of applications in its ecosystem, and such companies as Google, LG, IBM, and Boeing are announced among the partners.

Note that in our opinion, Hedera lacks prominence. They know about the project, but it is kept on the sidelines, which, however, did not prevent it from growing this year from $ 0.03 to $ 0.34: 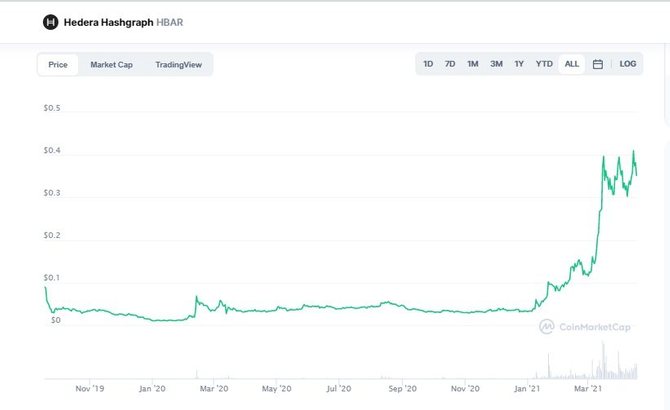 Now we see an unrealized double bottom on the chart and a hint of a downtrend: 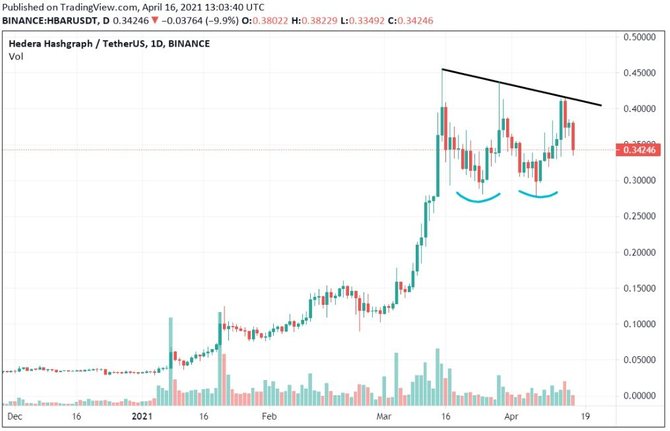 If we assume that Bitcoin will adjust even more, at the time of writing the article, the rate is $ 60,600, then Hedera should be watched for choosing a good moment to buy. In the long term, given the market sentiment, we expect this coin to rise to $ 0.5 and higher.

While Vitalik Buterin and the company are only telling how cool Ethereum will become after adding sharding technology to it, the developers of the Zilliqa cryptocurrency have already implemented it in practice. The question is, why then is it only at 58th place in terms of market capitalization?

Let’s take a look at the ecosystem and partnerships, to be honest, it’s good that it exists and a lot of interesting things are written there, but somehow they are not enough. Especially when you consider that the project has been on the market since January 2018 and at the same time it set its previous maximum price, successfully updated a few days ago. 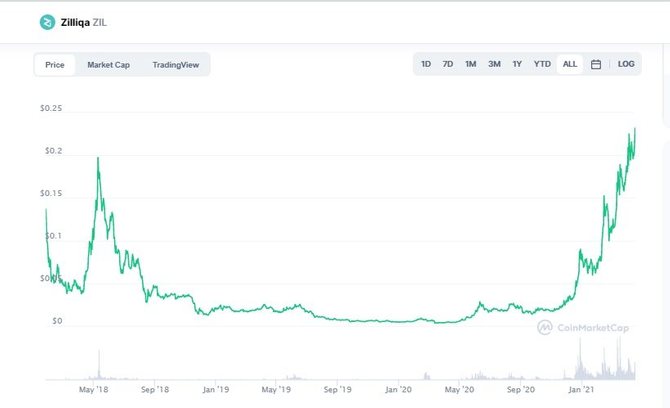 You can notice rightly that the price has already increased and it is very similar to a flight to the moon. Since the beginning of active growth in the fall of last year, they have already made 1,000%, but the achievements for 2021 are very modest, less than 200%: 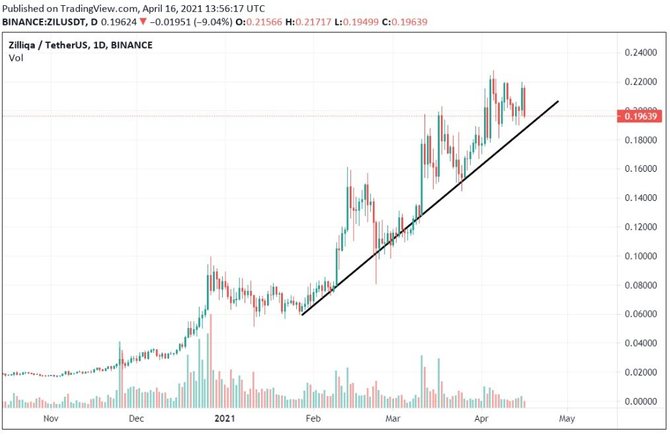 And we are confused by this chart with such strong corrections after each local high, as if one of the large token holders regularly fixes profits. But if the trend continues, then the next targets – $ 0.25 and then $ 0.3, in the medium term may rise to $ 0.4 and more if the situation on the cryptocurrency market is favorable.

Bitcoin Price Analysis: What Are The Goals Of Bull Run?