TOP 7 Altcoins Which Are Guaranteed To Make Profit In June

The article will include cryptocurrencies such as Cardano, Ethereum, Polygon, Chainlink, Uniswap, and THORChain. We also consider Bitcoin’s outlook for growth in June, has BTC kept the bull market?

The main expectation from Cardano is the addition of smart contracts and the full launch of the network, this should happen in a period of 30 to 90 days.

On the eve of this event, institutional investors are showing interest in the Cardano ecosystem. And the goal of 1 million unique addresses on the network was also achieved:

We add that the Cardano developers have very ambitious plans. This is what the head of the project Charles Hoskinson said. He does not consider his project an “Ethereum killer” because Ethereum is killing itself by changing the algorithm. On the contrary, he calls Cardano the first POS-based cryptocurrency to offer a complete ecosystem. And he says that we have already attracted many users who do not care about Ethereum, or maybe they do not even know about it.

Ethereum is the second cryptocurrency. As trader Lark Davis noted, in 2017, the TOP-2 cryptocurrency had five strong corrections, the largest at 66%:

But at the same time, it still grew by 17,000%. In 2021, the picture repeats itself, which makes him expect even more growth from Ethereum.
There are three reasons for buying Ethereum. The first is the growth of its market share. He continues to be the leader among altcoins and leads them. The second reason is that the interest in Ethereum trading is at a level close to Bitcoin.

We add that when the correction began, many began to put air on the exchanges, but now there is an outflow again. And the third reason is that a protocol update should be released in the summer, which will add the burning of some of the commissions. That is, it will reduce the emission of Ethereum, it will become rarer and, as a result, more expensive.

The main thing here is that the Ethereum developers do everything on time, otherwise they like to pull the rubber.

But this does not mean that you need to forget about the first cryptocurrency.

The argument that bitcoin has a long way to go is the news that billionaire Ray Dalio has announced that he has bitcoins. The trend is obvious, more and more old-timers of the financial market are turning their attention to bitcoin.

And two news from us: another billionaire Carl Icahn announced plans to invest about $ 1.5 billion in the crypto industry. And the PayPal payment network promised to add to its application the ability to send bitcoins between users, as well as output to other platforms.

The fourth place in the selection is taken by the second-level solution for Ethereum, which is a full-fledged ecosystem for launching decentralized applications, the Polygon project, aka the former Matic Network.

Polygon already has many running applications and a growing user base. If this continues, then no Ethereum 2.0 may be needed. Recently, billionaire Mark Cuban was added to the fans and investors in Polygon, who thinks about the same and calls this project the first solution that will fully unleash the full potential of the Ethereum blockchain.

By the way, Polygon has grown by 232% from the minimum during the current correction at the moment, so many are in a hurry to buy it: 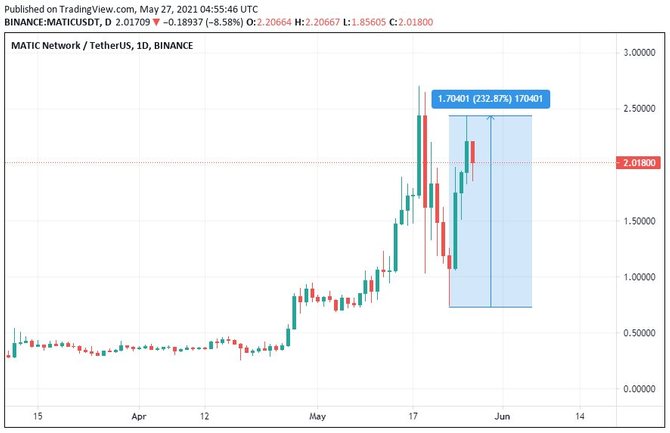 Uniswap is number five, the leading decentralized exchange on Ethereum, and will likely remain the leader for a long time to come. After updating the protocol to 3.0, the site increased trading volumes by 50%:

And the volumes of aggregators exceed the previous version of the platform by as much as 300%.

It is important to note that after the update, it was possible to reduce commissions by five times.

And what is also very interesting, during the collapse of the crypto market, trading volumes on Uniswap increased significantly. And given the fact that centralized cryptocurrency exchanges are increasingly tightening the screws due to fears of problems with regulators, the flow of new users of Uniswap will continue to grow.

The sixth coin is THORChain. It is a decentralized liquidity protocol that acts as a connecting bridge between different blockchains and offers the ability to exchange assets, keeping users fully accountable for the transaction.

The spirit of the project is somewhat close to Uniswap, because it also allows you to exchange cryptocurrencies without the need to use the exchange as an intermediary. And most importantly, you do not need to send a photo, utility bill, and other personal data to the exchange for verification.

The head of the project, Chad Barraford, spoke in detail about how THORChain works in an interview with Yahoo Finance. And if popularity comes, there will be an increase in prices.

And the selection ends with Chainlink. Now the coin has dropped out of the TOP 10 cryptocurrencies, but this has not made it worse. Altcoin Daily authors compare it with Google and believe that Chainlink could become Google in the blockchain world. Because they are the leaders of the blockchain oracles market, and without them there will never be a connection between the Internet and the cryptocurrency space. Because most decentralized applications need to receive data from the outside world and this can only be done using oracles. And in the future, their developments may be of interest to banks and financial companies when they start launching their own blockchain applications.