The 2 layer for Ethereum is by far the most successful solution to Vitalik Buterin’s blockchain in terms of the number of users and running applications, which solves the problem of expensive transaction fees.

According to DappRadar, there are indeed users on Polygon network. And media are very optimistic. For example, here is the rating of cryptocurrencies for which traders are expecting growth. In it, Polygon was in third place, behind only Polkadot and Solana, while Cosmos and Terra took fourth and fifth places. 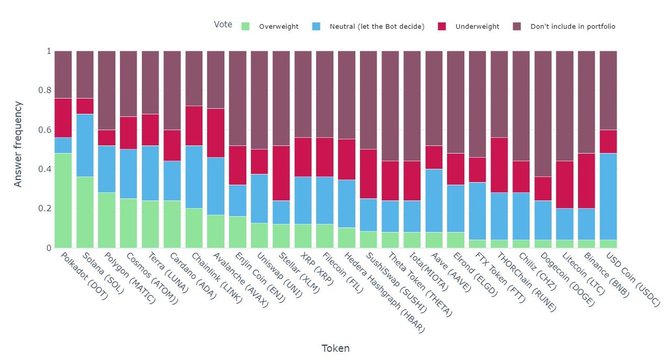 Also, Polygon was included in the TOP-5 cryptocurrencies for this week from Cointelegraph, which should be monitored.

They indicate a bullish RSI pattern and strong support at $ 1.2. A rollback to these levels is possible, but a rebound from it will lead the price to storm the resistance by $ 1.8; if the price is successfully fixed above it, it is quite possible to update the current maximum of the price.

An interesting forecast, we also want to note that we agree with the conclusions that the Polygon price correlates with the Ethereum rate, and as soon as the TOP-2 cryptocurrency breaks through $ 4,000, a similar movement can be expected for Polygon.

We sould add there is criticism of Polygon. They say that they are the most famous solution of the second level, but far from the most successful one, and that there are many scam projects in their network. Indeed, the new proposals are technically more attractive and over time competitors will begin to take the market away from Polygon, which will slow down the price growth. But so far we do not think that this process will be global. As for scams, they are on any blockchain, and the fact that they are now talking for Polygon only indicates that there really are real users, who are hunted by scammers.

Most likely, Polygon, like everyone else, will wait for a signal for massive growth from bitcoin, it is there that the fate of the market for this autumn and winter is now being decided. If there is, then we like the weekly chart, where when the candle closes above $ 1.8, the maximum will actually be updated.

Cosmos marketing is not project’s forte. The team took this position at the start and has not yet retreated from it. If you need news about this project, then go to their social networks, where you will find out that the developers have a plan, they hold various events and launch new projects inside their blockchain for blockchains.

The next important dates are October 22, but since they are not particularly PR, you should not expect an explosion in the price.

What the Cosmos chart can tell us.

The price is clearly pressed to its lower border and an exit in this direction will lead the course to intermediate support from the trend line at $ 25, even lower there is excellent support at $ 20, it is best to look for it on the weekly chart.

It is also clear that the bears have not yet come to the market, but they may seize the initiative in the next couple of weeks.

What do we have for today? Unfortunately, this is a bear market and an inability to reach new highs in price. Let’s see what news the CoinMarketCap aggregator offers us on the project. Once a month, so as not to forget about the coin altogether, a review of the exchange rate is published. The last of them concluded that the general current trend for IOTA is still bearish:

It is noted that buyers can try to compete for the price levels of $ 2, but there are special chances for this.

Note, that the project is alive and developing itself. Its social networks are assets and promise new events. But all this is a little bit different, there is no loud breakthrough for their technologies to really be used for a mass audience.

Historically, IOTA ATH is above $ 5 and whoever has been holding the coin since then means you have truly diamond hands and steel eggs. Because so far IOTA shows no signs that it may return to those price levels.

Note, that IOTA is not the only old-timer altcoin that the market has now banally forgotten and does not please with pumps. The coin followed Bitcoin well at the beginning of the year, and now maintains this trend. But the situation on the crypto market has changed, now bitcoin is eating altcoins and therefore the weekly chart has almost moved into the sellers’ zone, and the daily chart is already there.

Terra is project for creating multiple stablecoins for any fiat currency.

We also have concerns about the project itself that the LUNA token is both a coin for network management and, at the same time, a token for stabilizing the rates of issued stablecoins. Today it is no secret that regulators have taken up stablecoins and they are keeping a course in order to strictly peg them to fiat, no LUNA can be close there, or they simply will not work with such coins in the usual non-cryptocurrency market. Although so far, according to the news, everything is fine, and next year they promise to launch as many as 160 new projects on their blockchain. Sounds cool, but so far it looks like another hype.

The weekly chart shows that there is support at the current price and the bulls may still try to move the price by $ 50 again. 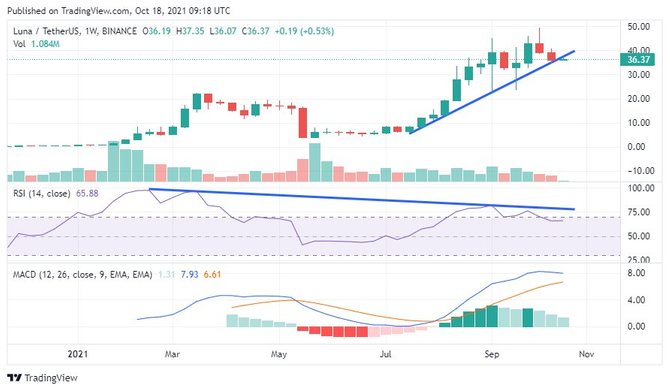 But the general trend suggests that bears will come to the market soon, if buyers do not activate. However, while the volumes for sale are weak and this is a good sign for the bulls.

Note that any negative forecast for altcoins will be instantly canceled as soon as the bitcoin price reaches its maximum.