Today we are analyzing TOP 4 cheap altcoins that can make you a crypto millionaire in 2 weeks. The selection includes NFT projects Opulous (OPUL), XCAD Network (XCAD) and FEAR, and the world’s most compact blockchain Mina Protocol (MINA).

The first cheap and very promising altcoin is Opulous. 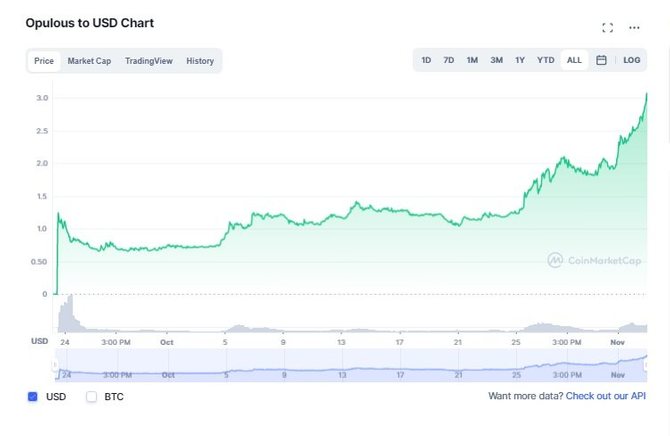 The project has am market cap about $ 60 million, a rating below 2,800 and a rather interesting project idea that intersects with current realities. Opulous platform is building a decentralized financial platform for musicians and investors in their work, and everything will be based around the release of NFT tokens. They offer to secure the authorship of the work and receive appropriate remuneration for the use of their copyright, and the platform also offers loans, for example, someone needs money for a new guitar and microphone, without which there will be no new album.

The platform announced a partnership with the Japanese messenger Line – it’s like WhatsApp, only in Asia.

Time for HUGE giveaways and LOADS of surprises!

The project is actively promoted among the community by various activities, for example, the distribution of tokens.

If you look at the price of Opulous, the coin shot out and then collapsed after listing on exchanges, which is generally normal and many do this when early investors take profits. But after that, the price found its bottom and has already recovered by 290%, which is a good bid for the future.

An important point: our article is not a financial recommendation, they say it all the time.

Another token with a rating of less than 2,000 in terms of market cap is XCAD Network. 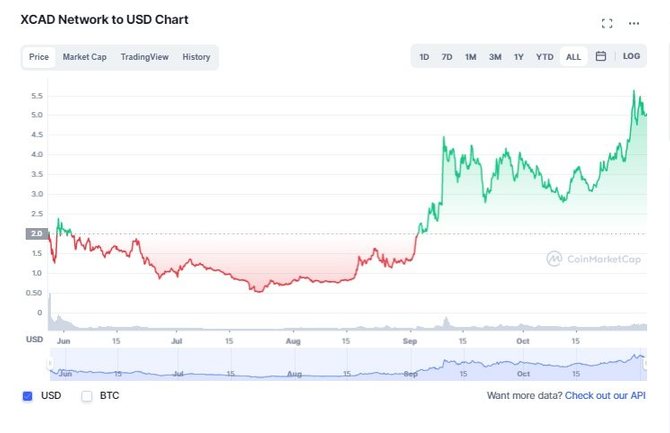 From the current bottom in July, the coin has already made 900% growth, and as you know, for the crypto market and such small projects, this may only be the beginning.

This coin hit the search trends on the CoinGecko cryptocurrency explorer:

And the fact that trending coins are growing is best proved by the recent explosion in SHIBA INU, everyone noticed it for sure.

The XCAD Network platform itself is another DeFi project, their chip in offering a reward for the content author. But unlike the first coin, they are not limited to music and you can make money on anything, for example, on YouTube videos. And they claim there are YouTubers who use their platform.

And also the project is collaborating with the Zilliqa blockchain and announces the continued development of their decentralized trading platform, another distribution of tokens and that their altcoin model is deflationary, which is good for the price in the long term.

There is FEAR token, the team of which is developing the horror metaverse. 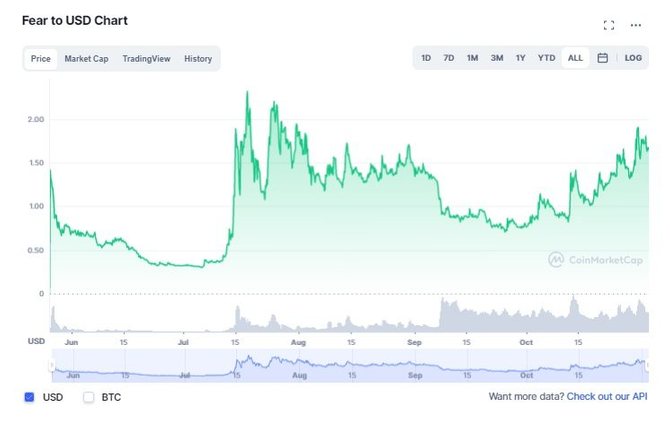 All this is not very expensive yet, but the work is in full swing and there is already a beta version of their horror museum, which will become the starting point of the project.

The Fear Museum is now Open in Beta Mode!

Fear Hodlers, adventurers, thieves or bandits, come one come all, enter the Horrorverse, but mind your sanity because everything is not what it seems in this museum of horrors!https://t.co/n8EXOHZBud#metaverse $fear pic.twitter.com/krbeQAwLqL

Let’s see how many people will be willing to visit it, as well as how the project will continue to develop.

The main prospect of this direction now is that, at the suggestion of Mark Zuckerberg, a hype to the metaverse has been launched. We think you saw how the tokens of the already existing virtual worlds MANA and SAND skyrocketed in value. This graph needs no comment. 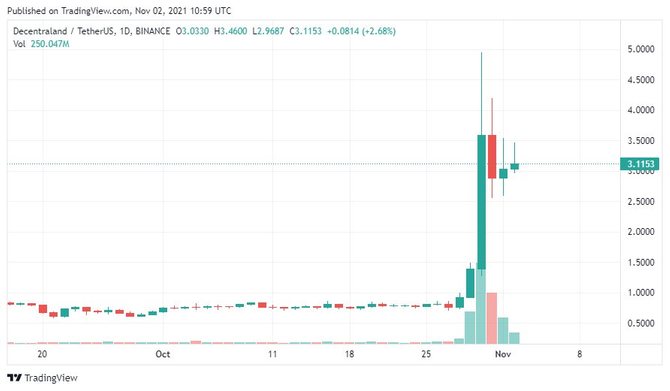 Others, the NFT platforms that create the metaverse, may replicate this success.

An interview with the founder of this project was chosen as a reason for growth.

⏰ STARTING NOW! Ever wonder about the differences between Mina's zk-SNARKS and rollups?

He talked about how the innovative approach of their development team will re-use the zero-knowledge proof protocol and how new decentralized applications with increased privacy will be built on its basis.

These are the plans of the Mina developers for this and the next quarter, the construction of a bridge with Ethereum is also spelled out there, and in fact they will work as a second-level blockchain for some time, the most famous example for today is Polygon.