Today we are analyzing 4 altcoins, such as Tezos (XTZ), TRON (TRX), FTX Token (FTT), and Cosmos (ATOM). We will go over these cryptocurrencies ant their reactions to the recovery of the crypto market, the latest news and price forecast for the near future.

The first coin is Tezos. A coin with a very long history, its concept appeared back in 2014, but development and launch were postponed for a long time due to showdowns within the founders and early investors, they could not share who is in charge and how many tokens to whom. The project was involved in a lawsuit and many already thought that the project would never see the world, but all disagreements were resolved and Tezos entered the market, having completed its growth in 2017.

Then there was the bear market. The coin made itself felt again in 2020, when the crypto market took a course towards recovery, and a strong partner appeared in the face of Societe Generale bank.

It should be noted that, although they are a blockchain with smart contracts, of which there are many, but from the total number of projects they are distinguished by their focus on large business, for which their solutions are created in the first place. And the ability to carry out network updates without hard forks.

But the chips that are popular today in cryptocurrencies are not alien to them, and the last growth was on the news about the beginning of NFT trading, on the platform for celebrities based on Tezos. Also, Tezos has recently acquired a Swiss bank InCore as partners, they also plan to tokenize and sell various assets. They talked about this back at the end of August, pointing out the prospects for this coin in September, and so far it has fully justified itself.
For today, Tezos has reached resistance at $ 8, where is the local maximum of this year. 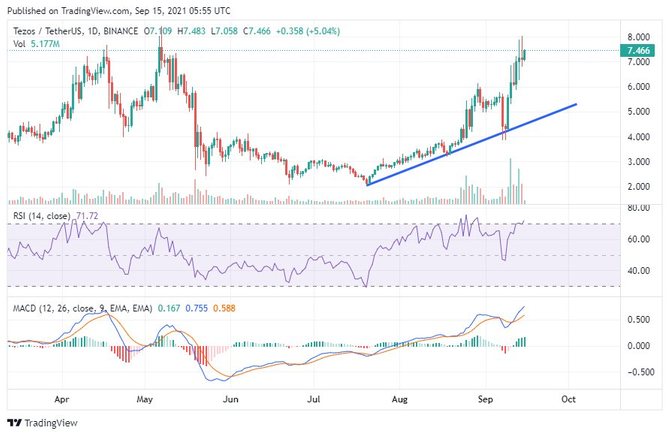 The breakout of this level right now opens up the opportunity to move by $ 10 and renew the historical maximum. But for this, buyers will have to show strength, since formally the coin looks overbought, and to continue to grow, a correction to the level of $ 5.5 and even $ 5 may be required. Tezos counts how the coin coped with the cryptocurrency market correction last week, so the bulls on it may still surprise.

The TOP-2 coin of September is Cosmos. We can only say that the project deserved it and its finest hour has finally come. Obviously, there will be a lot of cryptocurrencies in our life, that is, there will be Ethereum, Cardano, Solana, Tezos, and further down the list, and therefore the issue of interaction between blockchains becomes relevant.

Now everyone is building “bridges”, wrapping tokens. For example, there are several Bitcoin tokenization projects on Ethereum. And Cosmos developers approached this problem from a different angle. They released a blockchain development engine. This is similar to how there are engines for games in the form of their fundamental part, and then each game designer builds on top of it his own graphics, history, and controls. But at the heart of everything, it is the game engine that allows you to work.

Thanks to Cosmos, there is now a blockchain engine called Tendermint and all networks are built on its basis and are compatible with each other. And the fact that the technology is in demand is confirmed by the Binance cryptocurrency exchange, because their leading network in terms of the number of users of DeFi applications, the Binance Smart Chain, is built on the basis of this technology.

Interestingly, Cosmos developers never went to the forefront of the news feed, they just quietly made their project. But in the last 30 days, the project has got increased attention due to the launch of the blockchain interconnection protocol, which has already shown an excellent result of 700,000 transactions and the figures continue to grow. The ability to freely transfer tokens between different blockchains opens up amazing ways to earn money for those who know how to use them, by redirecting cryptocurrencies between different DeFi, or simply engaging in arbitrage trading on decentralized exchanges.

We can see an increase in ATOM price, and if you look at the news feed, new forecasts for the coin are released almost every day, further spurring interest.

Since the beginning of the crypto market recovery in late July, Cosmos has already skyrocketed 300%, easily coping with the recent sell-off, which speaks of the buying power: 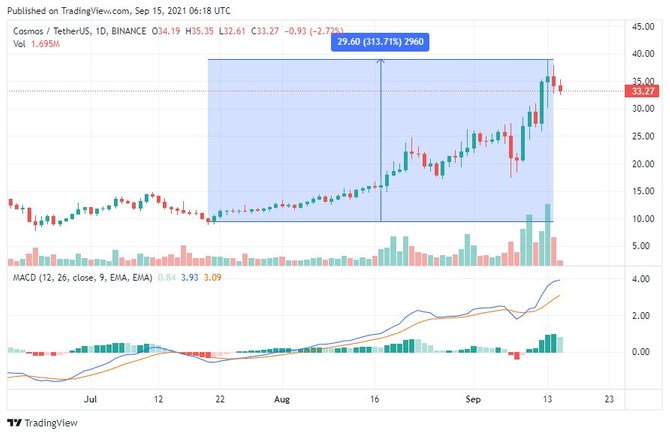 The coin is at an all-time high, but it is not worth talking about the completion of the growth potential. A pullback to $ 30 and a new upward reversal seems more likely. We will not be as optimistic as many other traders, so we do not expect 800% like Solana and an explosion in the TOP-10.

It’s not that Cosmos has problems with marketing, they just don’t deal with it and that’s it. But for the TOP-20 in terms of capitalization, the place for this coin may well be found, for which the price of the coin can be reached up to $ 45. This is not financial advice, but if the current trend continues, this is generally possible.

“Buy my shitcoin,” says Tron cofounder, Justin Sun, without hesitation. And people buy. He buys either dinner with Warren Buffett, which he got only on the second try, or an image of a stone for half a million dollars.

Just spent half million dollars on a rock 😂 pic.twitter.com/4zDmDgzERz

The project began with plagiarism scandals when TRON team took Ethereum code as a basis and replaced the confirmation algorithm with Delegated Proof-of-Stake, which was most likely borrowed from EOS. They even copied part of the specifications word for word and, in general, the development practice has not changed.

Why do something of your own when you can take someone else’s idea and transfer it to your own blockchain. This is how JustSwap and TronPunks exchange appeared, as well as many other applications. On the other hand, the world of cryptocurrencies welcomes development in the open-source format, which means that everyone can use it. And if Binance is simply riveting Ethereum clones on its Smart Chain, why shouldn’t the TRON team do the same.

Where is TRON’s price rising now? Primarily on NFT, the hot new collections are Bored Ape Yacht Club, which sold out almost entirely in 24 hours. And they also have cats, in the description of the Tron Cool Cats collection it is plainly said that this is an imitation of the popular collection of feline NFTs on Ethereum. But people like it, besides, TRON has low fees, in contrast to the real horse in the Ethereum network at the moment. And also the growth driver of the coin is good statistics, which indicates an increase in users and their activity on the TRON blockchain.

This is 52 million addresses, 2.4 billion processed transactions and $ 11 billion blocked funds in applications.

Justin is a master of promotion, but TRON has already run into strong resistance at $ 0.12, and our personal opinion is that either global growth throughout the crypto market or a cool news occasion can continue to drag the course further. The logical forecast for the near future will be a pullback to $ 0.10 and then a new storm of resistance.

FTX Token is the coin of the FTX cryptocurrency exchange, which is a surprise, however, and while Binance does not know how else to please regulators, and Coinbase also unexpectedly fell out of favor with the US Securities and Exchange Commission. It is FTX that does not hesitate to conquer the market, which affects the growth of their native cryptocurrency. Their most recent accomplishments are the purchase of LedgerX, a US-regulated crypto derivatives trading platform, and the launch of NFTs.

And if the rest of the coins just have a perspective, then many are waiting for FTX Token in the TOP-10 cryptocurrencies, attributing to it the opportunity to repeat the success of Binance Coin. Indeed, in fact, the concept of both coins and their fundamentals are in many ways similar, and the exchange itself is just on the rise, and its success is directly reflected in the price of the token, as was the case with BNB.

We are not alone in thinking that FTX Token could become the second BNB. Look at this prediction, which also makes a similar conclusion. And for the price, they distinguish an ascending channel with support at $ 69, where, by the way, we just came, and resistance at $ 75, which must be passed for the subsequent renewal of the current maximum. We would say that the coin has the potential for a larger decline, and the rate may well roll back to $ 55: 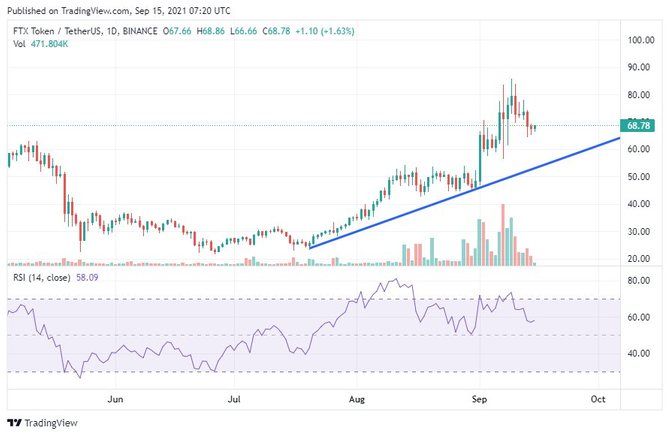 But in our understanding, the main driver of FTX growth is not a chart or a trend, it’s all about the exchange, and if they roll out new functions, or even better get some permission from the regulators, showing that everyone except us has problems, then the price can shoot.