If you still have bullish sentiment for Bitcoin and the cryptocurrency market as a whole, then I propose to analyze a selection of the TOP-3 altcoins. These are cryptocurrencies that have great growth potential in February due to important updates. It will be about Litecoin, Solana and Internet Computer.

Litecoin’s work on MimbleWimble protocol, which will make transactions private, is finally complete. It should be noted that many have even forgotten about this idea or stopped waiting. But the developers of “digital silver” brought their plan to its logical conclusion. Support for the Mimblewimble protocol will be included in the next Litecoin update, which will also add support for the Taproot soft fork that launched in Bitcoin last year.

Why did Litecoin developers even take the time to implement the anonymous Mimblewimble protocol in cryptocurrencies? The fact is that money has such a function as fungibility. When one dollar is always equal to another dollar. But in the case of a public blockchain, like Bitcoin or Litecoin, all transactions are easily tracked, and if a particular coin was seen in illegal transactions, then exchanges or sellers may refuse to accept it. It turns out that a Litecoin with a bad history is actually worth less than a Litecoin with a good history.

This update fixes this problem and, according to the developers, will make “digital silver” full-fledged money and the most used cryptocurrency for digital payments.

Sounds very cool, the final implementation will most likely take another one to three months. The question is, can the price of Litecoin rise on this event? It is believed that this gives the altcoin a huge potential. However, now there is no hype trend for private transactions, the best confirmation of this is the price of Zcash and Monero.

In addition, it was a bad time for an update, we talked about it at the beginning, the continuation of the bear market simply will not allow a normal pump to be organized. But as for the long term, the transaction chart shows the demand for Litecoin for payments.

Therefore, this update makes sense and will help the price rise in the future when the new functionality attracts even more users.

TOP-2 altcoin of February is Solana. This is already quite a hype and trend story. Recall that they position themselves almost as the fastest blockchain, and the project also has great support from the large FTX cryptocurrency exchange. And we do not exclude that over time FTX will at least try to compete with Binance for the title of the largest exchange on the market.

The reason why Solana got into the selection was that their main Phantom wallet attracted investments in the amount of $109 million. The Paradigm fund was the main investor, and such well-known companies in the crypto world as Andreessen Horowitz, Jump Capital and Variant Fund also gave money.

The Solana-powered Phantom wallet is like MetaMask on the Ethereum network, now valued at $1.2 billion, with over 2 million users, NFT support, and a recent iOS mobile app.

Why is it important? The development of the main Solana wallet will improve the ecosystem, attract new users who will bring their money and please investors with an increase in the amount of funds blocked in the network. And those, in turn, will return to buying Solana again when they see this growth.

Let’s add, recently Solana showed a breakthrough up by 18%. This is due to the fact that the Coinbase exchange announced the listing of two tokens – Bonfida and Orca created in SOL ecosystem.

Inbound transfers for Bonfida (FIDA) and Orca (ORCA) are now available on @Coinbase and @CoinbaseExch in the regions where trading is supported. Trading is not enabled at this time. Trading will begin on or after 9AM PT on Tuesday, February 1, if liquidity conditions are met. pic.twitter.com/0dtwx0CcgD

There are also unpleasant moments: there are big questions about the performance of Solana. Another network outage was recently reported. In general, we believe that even after the transition to the POS algorithm, Ethereum will not remain the only blockchain platform for smart contracts, and given that FTX is behind Solana, the project has very good long-term prospects.

This graph clearly shows how much of a disappointment the Internet Computer project, aka ICP, has become for many.

First, a very unfortunate moment to enter the market, just during the panic sale in May last year. 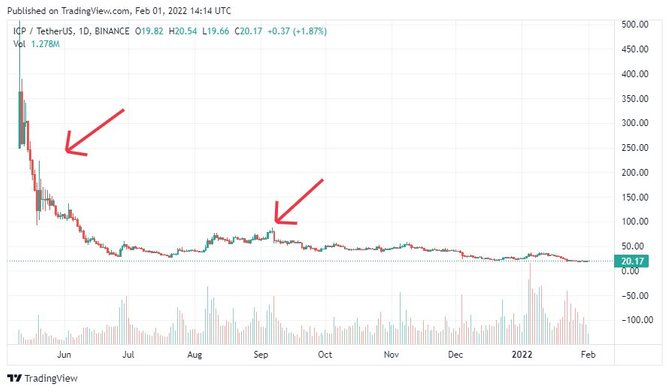 Then an extremely weak recovery in the fall, when bitcoin updated its historical maximum. The coin was never able to recover after the correction in September.

But we know that many believe in the project, thanks to their technological component. By the end of the first quarter of this year, integration with the Bitcoin blockchain will be made. A pilot version of the project should be ready in March, and the work will be fully completed by the end of the year.

The developers explain that they offer a unique technological solution. It will not be a “bridge” between the blockchains that are currently being created in other networks, that is, it will do without wrapped tokens. Also their offer is not similar to how the Lightning Network payment network works.

Given the dominant market capitalization of Bitcoin, the largest DeFi ecosystem can be created by integrating with Internet Computer.

The plan is very ambitious and it seems to us that the ICP developers have learned the previous mistakes and do not want to repeat them again. They already got burned last May when they entered the market during the fall. And this update, which we are discussing today, was announced at the end of last year. But there is a suspicion that, seeing the current situation with the price of bitcoin, they decided to tell all of us about the need for more development time. And in the meantime, they themselves will be able to refine their technology and choose a better time for launch. Because even in the event of the arrival of “cryptosma”, it will not be with us forever, and during 2022 very convenient windows may appear to present the Bitcoin-based DeFi infrastructure and hit your big jackpot.