TOP-10 Cryptocurrencies In May 2021: Which Coins To Invest In

It’s time to play with the promising cryptocurrencies for May, which should please their owners with an increase in price.

Bitcoin cannot be drawn down because the trust in BTC network keeps growing. Every day we receive news about new investments or developments in this area. However, the game publisher Nexon bought Bitcoin for $ 100 million.

And the fifth-largest asset under the management of the American financial holding U.S. Bank is completing work on its own custodian crypto service.

There is more and more such news. On May 3, CME starts trading micro-futures for bitcoin with a contract nominal value of 0.1 BTC. And the exchange itself is waiting for very high interest in this product, because the current contracts from 5 BTC, after the price rose above $ 50,000, became simply too expensive for many traders.

Ethereum is at second place. The reasons for the growth of altcoin from Vitalik Buterin lie in the hard fork in the summer, institutional acceptance and the rise in value in the Ethereum 2.0 deposit contract.

It’s too early to say if this is the first part of the cycle or already the second, but in any case, Ethereum’s growth prospects are simply excellent.

The honorable third place was taken by the Polygon project, whose mission is to free Ethereum from long and expensive transactions, that is, this is a second-level solution. 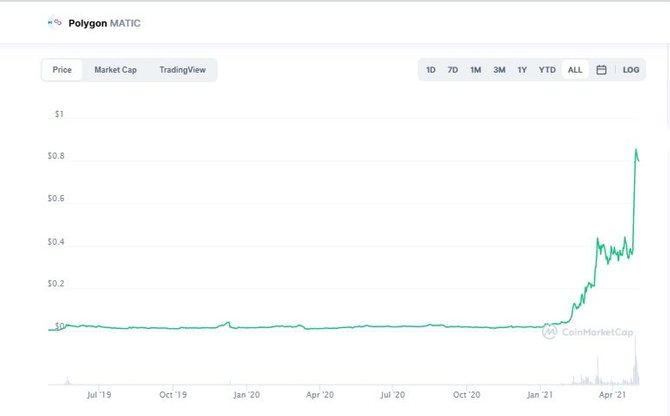 But we have seen not a single project in the current bull market that made a new high after the previous one. And also the Polygon developers assure that they not only work with Ethereum users, but also bring new people to this ecosystem through their project:

Ethereum killers are extracting value, @0xPolygon is adding it. https://t.co/J9rMqinsBS

This indicates a high level of demand, which can be realized in the form of an increase in prices.

Cardano is a coin that has a large following and will soon grow even more. Cardano co-founder, Charles Hoskinson, previously promised a great partnership in Africa, now it became known that we are talking about Ethiopia. We are talking about the transformation of the national education system using the blockchain, which will bring about 5 million new users to Cardano. All this will be accompanied by innovations in technology and an overall rise in popularity, which could push the price to new highs.

The fifth-place goes to Binance Coin, it is just updating the maximum price, but what if the rate goes even higher in May? The price of this cryptocurrency directly depends on the parent exchange Binance, which is now actively developing a new market for tokenized shares. The first were tokens for Tesla and Coinbase securities, now added by Microstrategy, Apple, and Microsoft. They say that the German financial regulator already has questions for the new stock market for Binance, but we think they will figure it out. The BNB price is also helped by the announcement of the NFT marketplace on the Binance exchange this summer.

Sixth place goes to Chainlink, everyone needs blockchain oracles and now they have decided to connect DeFi projects PancakeSwap from the Binance Smart Chain network and PolkaCover based on Polkadot:

We think there will be other partnerships soon, as more DeFi apps are being launched. Chainlink also has an upward trend, but here, of course, the point is how to draw it: 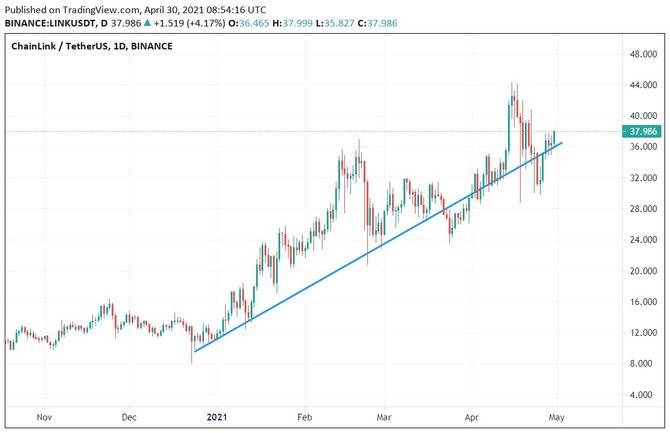 Cryptocurrencies VeChain is doing well and is going to follow the main trend, that is, add NFT tokens to its ecosystem. It is planned to spend about a million dollars on the development of this plan.

In eighth place takes the DeFi platform Aave. The project switches to a new version of the code and adds liquidity mining. They will now pay users for every action on the platform. Let us add that, judging by the chart, Aave had a good consolidation. 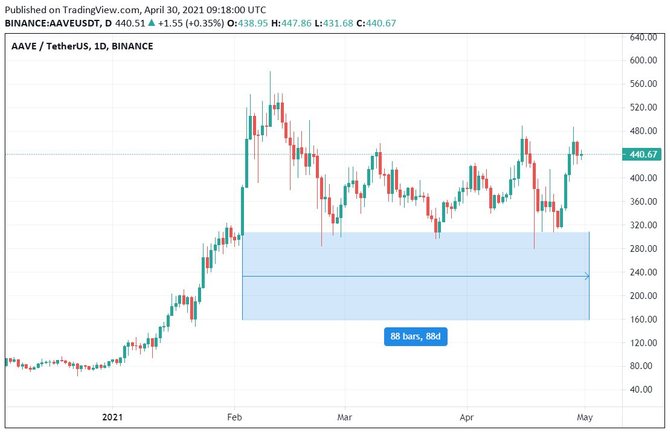 The ninth cryptocurrency becomes Injective Protocol, it’s like a Robinhood broker only in cryptocurrency, because they offer trading without commissions. From the latest news on them, we want to highlight the addition of their token to the Gemini crypto exchange.

Over $50 Million have now been locked into @InjectiveLabs Equinox Staking 🚀

And also an increase in the amount of funds blocked in the protocol up to $ 50 million:

Injective Protocol (INJ) is now trading on @Gemini! Everyone will be able to access INJ using the USD fiat pair. pic.twitter.com/l1TSPp6hTz

The tenth Dogecoin coin, it is still in the TOP-10 in terms of capitalization, and as the last tweet of Elon Musk says on May 8, he will talk about DOGE on the air of one of the shows.

The Dogefather
SNL May 8

This can be another great pump.

What Does Dispute With SEC Mean For Ripple And XRP?