Let’s see what laws are going to be adopted in United States and how they will affect Russia? Let’s deal with Bitcoin price, it is believed that everything that happens today will lead to its growth in 2022, and in the long run the rate will reach a million US dollars.

The world is heading towards giving the green light to Bitcoin under loyal regulation from the US, Dubai, the European Union and Ukraine.

But you should not relax, and there are the following reasons for that. The first is the IMF, they really do not want to lose the status of an international hub for distributing funds, and they regard alternatives in the form of cryptocurrencies precisely as a threat. If you don’t know, but when El Salvador accepted Bitcoin as a legal tender, it was the IMF that constantly scared the country by denying financial assistance.

And here’s the latest news that Argentine authorities went on about the IMF. They agreed to limit the use of cryptocurrencies in exchange for a $45 billion debt restructuring deal.

The second reason is the conflict in Ukraine and the sanctions on Russia. US Senator Elizabeth Warren, by the way, a well-known hater of cryptocurrencies, came up with something to ban and prepared a draft law that should limit the use of cryptocurrencies by Russia to circumvent sanctions. In fact, this will mean control over operations on crypto exchanges that fall under US jurisdiction. First of all, these are Coinbase, Kraken and Gemini.

Another member of the US Congress, Bradley Sherman, spoke about plans to supplement this bill. He proposes to ban American crypto exchanges from doing any business in Russia. In fact, this means blocking all Russian accounts.

These draft laws must first pass hearings and then be signed by the President. But the speed with which sanctions were imposed against Russia makes one wonder if such an outcome is possible.

Let’s move on to Bitcoin – there is an interesting picture. 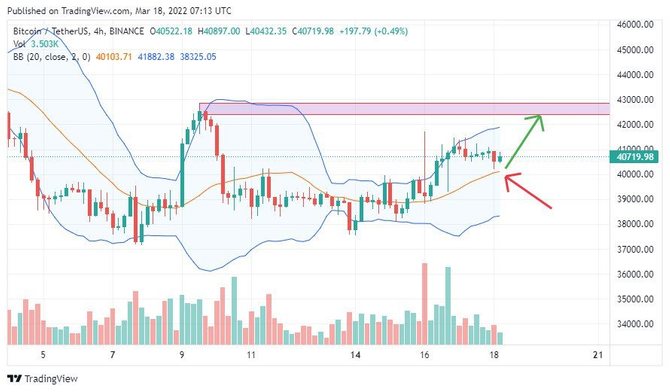 The level of $40,000 is an important and fairly strong support. From this level, we can start a local uptrend, which will lead the price first to $42,000, and then to $45,000. This fully fits into the forecast that was voiced earlier, when Bitcoin price can move to the upper limit of this figure. 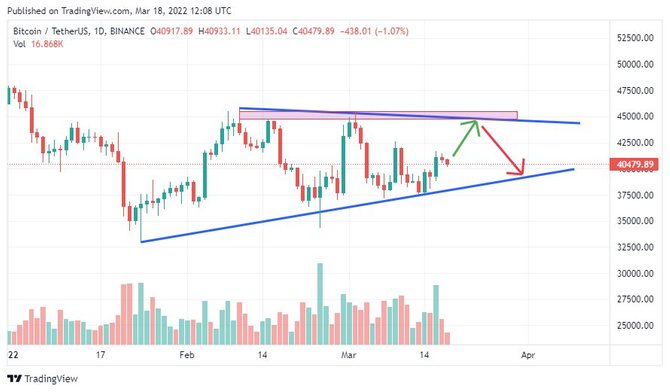 However, we do not see an increase in demand for Bitcoin and the reasons why it should appear in the near future. Therefore, after reaching the level of $45,000, we will wait for a correction back to $40,000.

We have to share with you two very interesting predictions. The first is from Bloomberg analyst Mike McGlone.

Facing the #FederalReserve, inflation and war, 2022 may be primed for risk-asset reversion and mark another milestone in #Bitcoin's maturation. It's unlikely for Bitcoin to stop outperforming #gold, #stockmarket amid bumps in the road as the Fed attempts another rate-hike cycle. pic.twitter.com/4v1kvcq3vd

In his understanding, as the Fed raises the rate to fight inflation, Bitcoin will not lose the asset war with the S&P 500 and gold. He believes that Bitcoin will continue to outperform them in terms of profitability.

The second forecast is from the former head of the BitMEX crypto exchange, Arthur Hayes. He published a long article on the topic of the current situation. For those who do not know what to do with bitcoin now, here is his advice, which we can fully subscribe to:

“Don’t make the problem worse. When you inherit a poopy position as a trader that you can’t immediately ameliorate, just simply don’t get deeper into the hole..”

In conclusion, let’s talk about the TOP-2 Ethereum cryptocurrency. Vitalik Buterin is on the cover of Time magazine. This is an indicator of the level of recognition of Ethereum as the future use of this cryptocurrency at the global level.

Articles are good, but information that the transition to Ethereum 2.0 can really take place this summer is much better. Earlier, Vitalik Buterin himself spoke about this, now the information was confirmed by the co-founder of Ethereum and the head of ConsenSys, the developer of blockchain solutions, Joseph Lubin. He said that the Kiln test network has already successfully merged two blockchains based on the Proof-of-Work and Proof-of-Stake algorithms. A similar event, but already on the third Ethereum network, is tentatively scheduled for the end of the second quarter of this year or the beginning of the quarter.

In light of such an announcement, you should have a logical question: will there be an Ethereum pump? We maintain a long-term outlook for Ethereum and believe that its price may well return to $4,000 and then move to $10,000. But at the moment, the price of Ethereum is completely dependent on the bitcoin market, and if we do not return to long-term growth by this summer, then the Ethereum pump on the news about the transition to Ethereum 2.0 is unlikely to be more than 30%, a maximum of 50%. Again, this is our vision, but we do not wait for the native in Ethereum until Bitcoin returns at least $70,000.