Stablecoin To Masses: How American Crypto Startups Are Trying To Create Their Own Banks

Office of the Comptroller of the Currency (OCC) allowed US banks to hold funds to collateralize stablecoins, which are pegged to fiat currencies, at a 1: 1 ratio in the fall of 2020. The regulator went even further and allowed credit institutions to use open blockchains and stablecoins for payments a few months later.

The regulator noted that INVN will complement the current scheme of processing user payment orders. The only difference will be that this work will not be performed by centralized systems, but by the nodes of the blockchain network.

In general, the new scheme will work as follows: the bank’s client converts US dollars to stablecoins and transfers them to the recipient via INVN, after which the recipient converts them back to US dollars. At the same time, payments themselves can be domestic and cross-border. The use of INVN and stablecoins can provide cheaper, faster, and more efficient means of making money transfers.

OCC’s solutions have paved the way for stablecoin companies in the US banking market. By contacting the regulator, they could obtain a full-fledged license from the national bank – this is how the United States calls commercial financial organizations operating throughout the country.

Since OCC decision spoke about banks working with digital assets, a new name was invented for them – National Digital Currency Bank (NDCB). How popular was the new proposal of the American regulator, and which companies have already taken advantage of it?

The first of these was the California-based startup Anchorage – in January 2021, it announced the creation of the first national digital bank in the United States.

Anchorage was created in California in 2017. Initially, he was engaged in custody services in the field of cryptocurrencies, but later he began to develop other products: trade, lending and work with DeFi-instruments. Since its inception, Anchorage has been focused on working with institutional investors.

During its existence, the company has closed four investment rounds, having managed to raise $ 137 million. The number of investors included not only large venture capital companies, such as Andreessen Horowitz and Blockchain Capital, but also the Visa payment system.

It was Visa that became one of the participants in the first cryptocurrency transaction in the history of Anchorage. In March 2021, her account opened with a digital bank received a payment from the Crypto.com service, with which Visa is working on cryptocurrency projects. It was completed on the Ethereum network, and the USDC became the unit of account.
Six months after the information about obtaining a banking license, Anchorage announced the launch of only two partnership projects.

The first was organized jointly with California-based Silvergate Bank, which serves the accounts of a large number of cryptocurrency companies, including large exchanges. Another commercial bank, BankProv, has become a partner in the second project. In both cases, Anchorage offers its clients to use cryptocurrency assets for issuing loans in fiat in partner banks. In the first case, Bitcoin is used as collateral, in the second – ETH.

Judging by the description on the company’s website, it is cryptocurrency loans and deposits that will become the main products of its digital bank. There is no information about how much they are in demand now and which companies can become new partners for Anchorage.

In parallel with Anchorage, several more cryptocurrency projects applied for licenses to OCC. BitPay, the payment service, did it before the others – the company’s executives wanted to register a new bank in Georgia state. However, the matter did not go further than the initiative – after almost a year nothing is known about the fate of the project.

The other two companies were more consistent. Blockchain startup Paxos, which produces its own stablecoin Pax Dollar, received its OCC license in April. By this time, the project already had a banking license from the state of New York – now its effect has extended to the entire territory of the United States. A little earlier, another blockchain project Protego, registered in Seattle, received an OCC license. 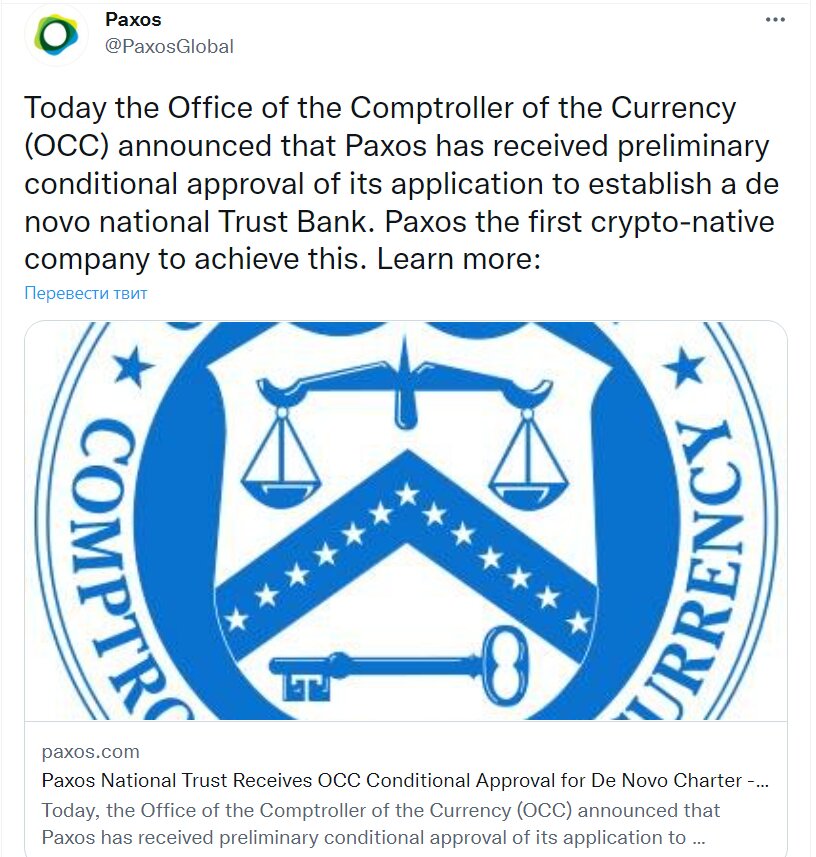 In all these cases, including the Anchorage story, an important caveat must be made. All banking permits issued by the OSS are preliminary. These are followed by a cameral stage of work, during which representatives of the regulator will study all the internal documents of the companies. The final permits will be received only after the completion of this process, which can last up to 12 months. In the event of any claims from the OCC, the licenses may be revoked.

In August, one of the most important players in the cryptocurrency market, the Boston-based company Circle, announced its intention to create a national digital bank. In 2018, together with the Coinbase exchange, it released USDC, a stablecoin pegged to the US dollar. At the moment, the token is in the top 10 largest cryptocurrencies with a capitalization above $ 38 billion.

Circle said the new bank would be compliant with all national regulators such as OCC, the Federal Reserve, and FDIC. However, it is not yet clear whether the company intends to apply for the license directly. The prospectus for SEC, which was published ahead of its public listing, says the company is also considering buying a bank with a valid license.

Exactly how Circle intends to use this license is not stated in the prospectus. The only clarification on this matter sounds like this: “the license will allow us to get direct access to Federal Reserve, reducing the cost and time for settlements.”

In a statement, the company separately noted that it already meets the liquidity requirements of Basel III. This document was developed by the international committee on banking supervision, which includes regulators from 28 countries.

In the summer of 2021, this committee came up with an initiative that should reduce the risks that banks face when working in the cryptocurrency market. It proposed to classify stablecoins as a group of assets with a lower degree of risk – it is assumed that if they are backed by a pool of traditional assets in a 1: 1 ratio, then the bank does not need additional coverage.

Circle noted that USDC collateral has always met these requirements. Coinbase COO Emily Choi also confirmed this. According to her, stablecoin has always been backed by assets, the value of which is equal to or more than $ 1. This approach provided the owners of USDC with the opportunity to exchange the asset for the US dollar at any time.

Moreover, in August, Circle developers announced their decision to keep only US dollars and US Treasury securities in the USDC collateral basket – previously their share was less than 75%. This announcement was made against the background of preparations for an IPO and was not directly related to plans to launch its own digital bank, however, as expected, it should give investors additional confidence in the future of USDC. 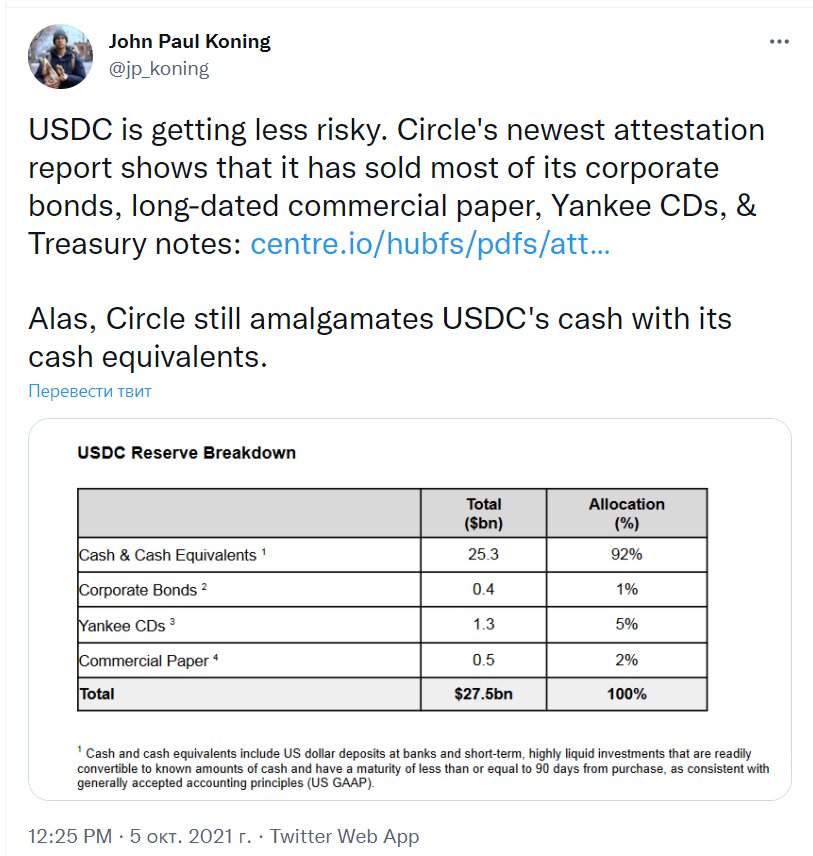 Is USDC a threat to the digital dollar?

The launch of the first American national digital banks comes amid statements by American regulators that the United States is far behind in the development of a central bank digital currency (CBDC).

While the United States is only planning to launch pilot programs to test the digital dollar, China is already preparing to start using its digital currency during the Winter Olympics in February 2022. Similar projects are being developed in several dozen other countries. 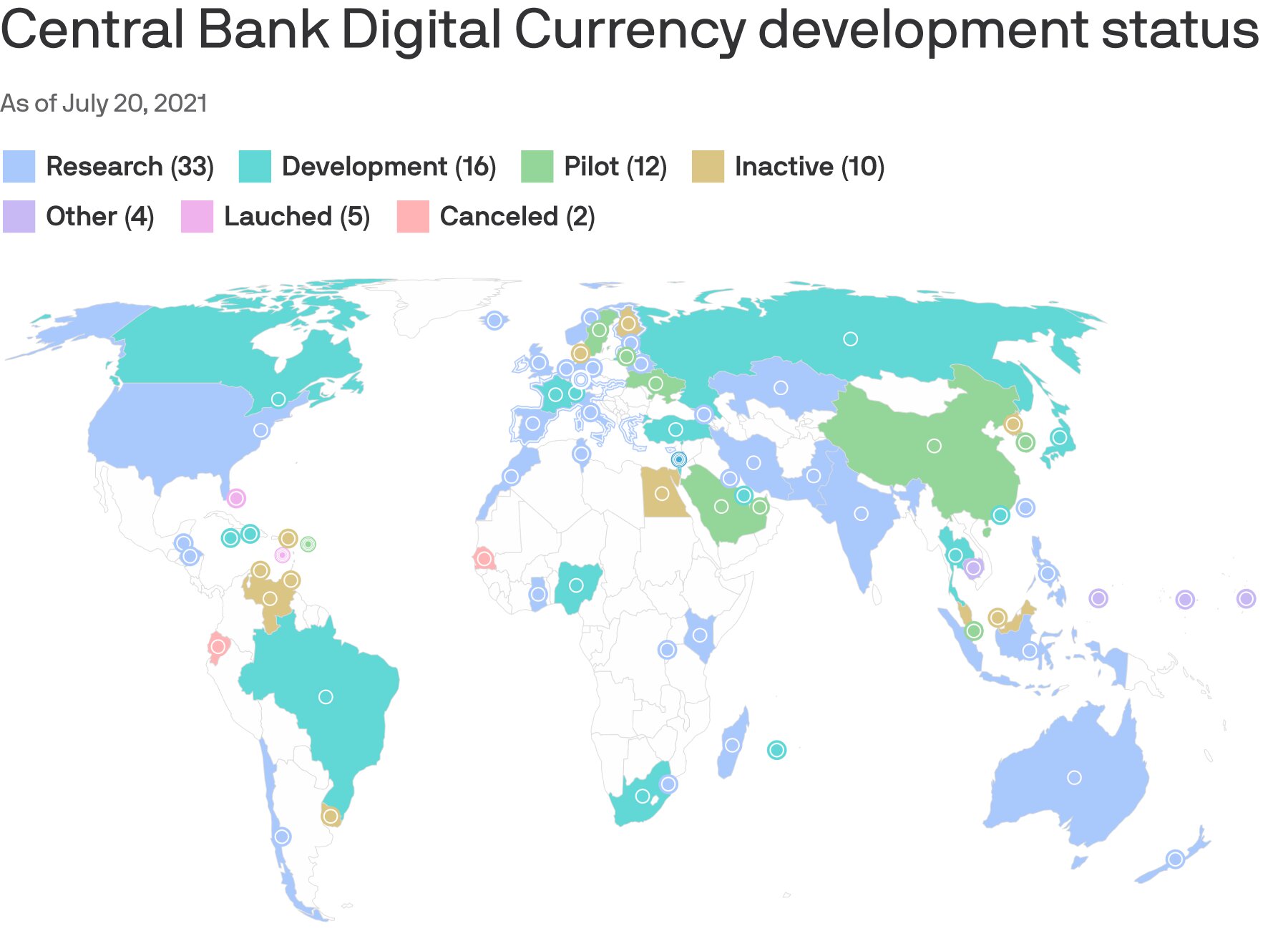 This is what causes concern among American regulators – analysts openly say that CBDC in the future may become a more effective financial instrument than traditional cash. In this situation, Circle’s intentions to become a regulated company and scale may raise concerns among US regulators that its stablecoin may be more in demand than the digital dollar.

How the American authorities react to such initiatives is well known on the example of the Libra project, which was presented in the summer of 2019 by the social network Facebook. Its creators were going to launch a stablecoin pegged to the dollar, but due to endless bureaucratic proceedings, the project was actually frozen for some time.

Of great importance in this situation will be the opinion of the SEC, whose position in relation to cryptocurrencies remains extremely tough. The new chairman of the commission, Gary Gensler, said he was not a fan of stablecoins, comparing them to the chips used by casino players.

While the development of the digital dollar continues to stall, stablecoins are becoming an increasingly popular means of payment. According to McKenzie, in the first half of 2021, the volume of transactions in them amounted to about $ 3 million. Thus, the growing popularity of USDC may become an additional irritating factor for the American authorities, which are losing competition in the field of digital currencies not only to foreign competitors, but also to private companies inside country.

Is USDC the New Digital Dollar?

On the other hand, the active development of stablecoins may become one of the possible solutions to the “digital dollar” problem. A recent article by analysts at the Federal Reserve and Yale University suggested using them as a digital counterpart to the national currency.

Experts suggest that the US government abandon the development of its own CBDC, and instead include the companies that issue stablecoins in the perimeter of banking supervision, and issue them the appropriate licenses.

In this case, these companies will become digital money issuers. The authorities will only have to present their requirements to them for ensuring liquidity, deposit insurance, and independent audit. Analysts at the Fed and Yale University believe that one of these stablecoins may be the USDC, named in the material as one of the most “transparent” projects on the market.

Given the extremely difficult attitude of American regulators to everything related to cryptocurrencies, it is difficult to predict what position they will take in relation to stablecoins. However, by the time the issue of Circle’s banking license is resolved, there should already be significant progress on the digital dollar issue.