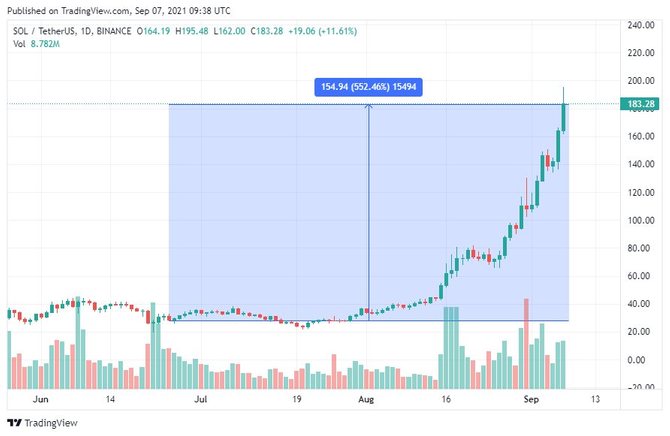 Which is also several times more than the expected $ 100 per coin in July. Can we make an even bolder forecast today and say that the rate can reach $ 300, and Solana will break into the TOP-3 cryptocurrencies in terms of capitalization?

Solana is an extremely interesting project, a fully functional blockchain for smart contracts. Although the browser contains the Beta postscript, this is a temporary phenomenon, and in fact this is the main network, in which various projects are already being launched. More than 1,000 validators are responsible for blockchain security. The claimed throughput is 50,000 transactions per second. This is possible due to the double consensus mechanism of the Proof-of-History and Proof-of-Stake algorithms. The ecosystem already has many projects in various directions, including DeFi and NFT, developers and users choose Solana for its high speed and meager transaction costs.

Everything looks just fine and given the $ 300 forecast, Solana only needs to be praised from all sides. Such growth of Solana is dictated not only by the market, but also by a decent share of the hype, which provoked the well-known syndrome of lost profits in many crypto investors, aka FOMO.

Judge for yourself how the Solana project looks great, but this is not the only fast blockchain with cheap transactions, why did the money flow like a river here?
If you follow the chronology of events, then the coin went into space on the news of raising $ 314 million for the development of the project from such investors as Andreessen Horowitz and Polychain Capital. An interesting point is that the investments themselves were made back in June, but the media began to spread the news only in mid-August, while calmly referring to the June source with a note, they say, we only learned about it today.

After that, the price jumped by $ 50 and then very quickly reached $ 100 and continued to grow. To pass an important milestone, it becomes known in time about the launch of an NFT platform on Solana called SolSea. Already in the name there is a direct reference to the most popular NFT marketplace, OpenSea, which operates on the Ethereum network. As the saying goes, why come up with an original name if you can take advantage of the popularity of an already promoted brand. The developers have not forgotten about the blockchain games that are gaining frenzied popularity today with their NFT tokens according to the play and earn system. There will be such a Star Atlas game on Solana.

Not without more serious support, they brought in an American pop star who spoke about his investment in Solana. Cardano creator, Charles Hoskinson, spoke about the possibility of future cooperation between the two networks. But the hardest tool, personally in our opinion, was the FTX exchange, which launched its own NFT marketplace, which supports token trading between the Ethereum and Solana blockchains. The demand for this service turned out to be so huge that on the very first day of its launch, a one-time commission of $ 500 was introduced:

1) Due to the massive number of submissions, too many of which were just a picture of a fish, we are now charging a one-time $500 fee to submit NFTs.

Hopefully this will reduce spam.https://t.co/46FabjTVfy

We can say that this is just a coincidence, just a lot of good news on the project that pushed the price. We cannot know if this is a coincidence or someone’s plan, but we are sure that all this created a hype around Solana. And at the moment he does not think to end, and everyone wants to take a bite of their own.
For example, Osprey Funds, a cryptocurrency investment company, has applied to register a fund based on Solana. And they may well catch the train, because the HYIP affects everyone and launches FOMO, even for institutions. Here’s the data from the CoinShares report for the past week, and here we see that institutions have contributed over $ 13 million to funds based on Solana over the past seven days: 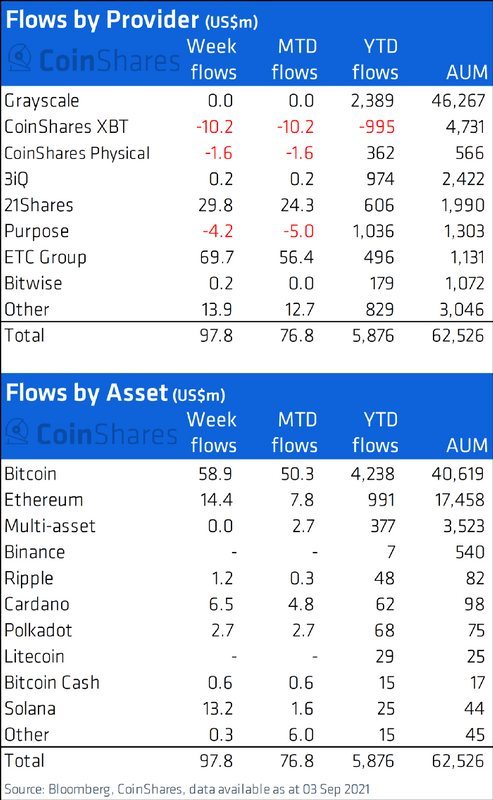 The first factor in Solana’s continued growth is maintaining the hype. We do not know if those who organized this pump still have trump cards, but the media are now in love with this cryptocurrency and are talking about it all the time, any sneeze about Solana will definitely get into the TOPs, because there is demand from readers.

Take a look at this graph from Google Trends to see how the coin has grown in popularity lately.

And there is no need to look for special reasons, they will launch some kind of DeFi in their network and the token has grown in price, or some NFT will be sold for a lot of money. In general, if you want to promote the coin further, this can be done.

The second factor is the price of bitcoin. And factor number 3 is bullish momentum. Solana is in a parabolic growth stage now and must either be continued or an extremely unpleasant hour of reckoning will come. The weekly chart looks quite bullish, although the coin is overbought, but it is the buyers who dominate the market now.

The daily chart also shows that the bulls are ready to continue rising and are not giving up yet. 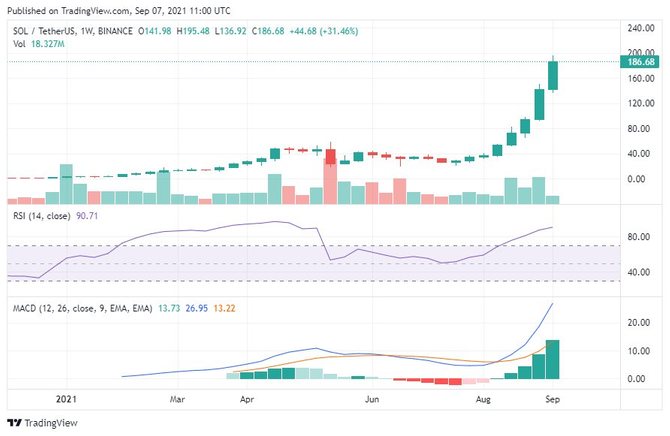 Solana may well jump from the current values towards $ 300 and compete for a place in the TOP-3 with Cardano. This is not a guaranteed future, but only our humble opinion, how you use it, will you hold a position or choose breakpoints to fix, everyone must decide yourself.

What Is The Future Of DeFi