Metaverse And Internet of Things Tokens That Can Burst In 2022

Bitcoin has not yet decided whether the correction is over or will still fall below $ 60,000, which is why almost all cryptocurrencies are in the red zone. But there are four altcoins that are going against the market and this trend may continue and accelerate over the next few months.

Zuckerberg set a new trend for the metauniverses, and now all online games and virtual reality platforms have abruptly become metauniverses. But no matter what it is called, the main thing is that prices began to rise sharply. The fact that this is a new trend not only in cryptocurrencies, but in the whole world, was confirmed by analysts at Morgan Stanley, who called the metauniverses “a new major investment opportunity.”
Against this backdrop, related cryptocurrencies such as Sandbox continue to grow. Already almost 400% growth on the hype from Zuckerberg and investments in the platform from SoftBank.

They also decided not to miss the moment and quickly talked about the addition of NFTs, which will appear on December 1 this year. And the most interesting thing that allows the price to rise here and now is the announcement of the start of open alpha testing of the Sandbox platform. After four years of development, it will finally be possible to actually go into the virtual world and conduct transactions there using cryptocurrencies and NFTs. The event is scheduled for November 29 and will run until December 20.

The crypto market is very fond of such events with the long-awaited launch of the platform and provided that bitcoin stops falling and the price returns above $ 60,000, and various celebrities will really start making money from fans through the virtual world of Sandbox, as we were promised. We wouldn’t be surprised if the SAND token rises to $ 10 or more.

Another metaverse token that is moving against the market is Decentraland. The coin cannot offer any cool news, like their competitors from Sandbox, but they caught a very cool hype. The Decentraland site was the first to open a virtual embassy of a real country. And even though Barbados is a small island state, we would even say, well, a very small state. Nevertheless, there is also a real precedent when you can contact the embassy of a country through virtual reality.

Inside the Decentraland world, you can buy virtual real estate, use it, sell it for real money, and soon you can visit the embassy of another state. In general, it is a cool trick, because as long as there is only one such object in Decentraland universe, everyone will pay attention to it and thus you can promote your country. And if this turns out to be effective, other countries will also start looking for tourists within the metauniverses, and the real and virtual world will receive a very interesting case for use.

We cannot know whether it will be Decentraland that will become the platform where our virtual life will take place, maybe Zuckerberg will overtake everyone. But we can assume that the world will not be limited to one metaverse and those projects that have already begun to develop this market will become its leaders in the future. As for the price, the first goal for the MANA token is the current maximum of $ 5, well, and then, the ceiling is not yet visible and everything will depend on the market as a whole and the development of the project.

Cryptocurrency IOTA is a conventional altcoin-old man and now it is not in the best position if you open the price chart for the whole time.

It can be seen that the coin is not on the hype, and is also embarrassed by the too weak reaction to the recovery of the entire crypto market. At the same time, they have an original technology for building a blockchain and have chosen a promising niche for development in the form of Internet of Things.

But the market did not appreciate IOTA for a long time, although the developers tried, and now we see that the effort has finally begun to convert into a price increase. Here’s the news lately. First, zero commission smart contracts were introduced. Here the developers of numerous DeFi were horrified, because they only do what they earn on commissions. But if you look from the side of the user, then personally we are in favor of zero commissions. But developers do not have to panic, we are talking about zero fees in the main layer of the blockchain, but inside applications, you can make a surcharge for operations. Although in theory they can also be made equal to zero, and then an element of market competition arises, who will offer the user more favorable conditions.

They also presented an update that will make IOTA finally a decentralized network, that is, they will remove the central node, which is now responsible for coordinating data between different chains. And they will add new functions for launching applications, issuing tokens and, of course, IOTA will have their own NFTs. And the growth that we see today despite the falling bitcoin is a consequence of the announcement of the start of testing the announced updates with the arrival of 2022.

IOTA is currently accumulating, with key resistances at $ 2 and $ 2.5: 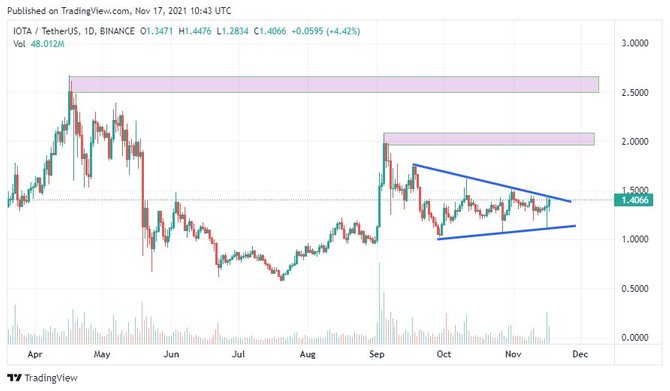 It is quite possible to pass them on the news about blockchain updates, which in the future will open the way for growth to $ 5 with an eye to a new historical maximum.

But what happens to the coins that came to the market a little later and did not manage to shoot in 2017: 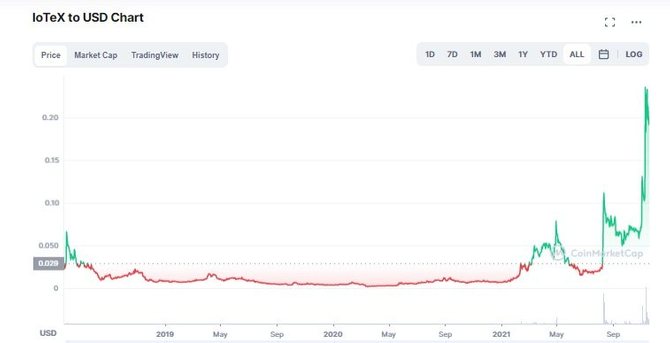 We are talking about the IoTeX project, which is also building a “bridge” between the blockchain and the Internet of Things. They are not pioneers, but they know how to correctly present their achievements, and growth in October began with the announcement of the development of the first blockchain supply chain in the healthcare sector, which is relevant in light of the coronavirus, which has not gone anywhere.

After the pump ended and the price adjusted, IoTeX make new growth on the news about the expansion of the scope of their technology and add another 111%. And then, when the price corrects again, they roll out plans to switch to DeFi and NFT, promising to change the industry with their unique technology.

By and large, everything that they are doing now and due to which the price is increasing are only announcements of future achievements, but the market likes it. And if the promises start to come true, then the coin could grow even more, ending this cycle at $ 1 or higher.

Note that IOTA and IoTX have succeeded lately due to the fact that the ideas of the metaverse and Internet of Things are quite closely related. It seems like something abnormal, but this may very well be the next stage of technological progress.

Metaverse And Internet of Things Tokens That Can Burst In 2022

4 Secrets For A Successful Trading