Central bank digital currency or CBDC based on distributed (blockchain) and centralized ledgers, are widely discussed over many countries. For the first time, they were talked about as a “legalized alternative” to public and private cryptocurrencies, while retaining some of the functionality and technical characteristics. The turnover of the latter, as before, is not fully supported by any major central bank. The stumbling block remains the factor of maintaining state control over the emission and circulation of funds, as well as ensuring the value of the currency.

Among the models prepared by sovereign regulators, none imply the introduction of a competing currency. Thus, any similarity between CBDC and cryptocurrencies is excluded, including with the stablecoin model – a token secured in some proportion by another underlying asset.

The digital national currency is just an improved version of fiat money, the stability of which is ensured by the state. In other words, it is a “new form of money”, at this stage, supplementing cash and non-cash funds. From the published scripts for the launch of CBDC, it most often follows that it is a direct obligation of the regulator. That is, it has only one issuer – the central bank. It is responsible for purchasing power and safety, and also guarantees the rights of users.

World central banks may well consider it expedient to tokenization and non-cash funds in the near future. In this case, a “fourth” form of money will temporarily appear in the system – an analog of credit funds. In this case, it is commercial banks that will issue this type of money turnover.

Most likely, money issued in a new form will still perform such functions as a measure of value, a medium of circulation, and also a means of accumulation. The latter is without interest on the balance.

Since the CBDC unit is equivalent to one unit of the currency of the same country in cash and non-cash form, it is incorrect to talk about the exchange rate between the three forms of money. All three forms of digital government currency will be completely interchangeable from the very beginning.

The regulator will connect financial institutions to the platform, and they, in turn, will open and replenish electronic wallets for their clients – individuals and legal entities. However, all data is stored on the platform. This means that transactions are not reflected on the balance sheets of banks, and holders of digital rubles do not bear the risks of bankruptcy of a credit institution. In other words, users will always have access to their tokenized cash in an electronic wallet when going through the identity verification procedure. The possibility of owning currency and making settlements in anonymous mode is excluded.

For starters, access will be provided through an Internet connection. As an alternative, offline functionality is being considered by opening a second wallet in digital rubles directly on the client’s mobile device with bluetooth or NFC. So far, it is planned to set a limit on transactions in this mode at the level of money transfers without identification. In addition, some global participants in the payment market are preparing their infrastructure proposals. For example, Visa has developed an OPS (online payment system) protocol for CBDC offline. It provides real-time transactions and nearly unlimited bandwidth. The threat of double write-offs is eliminated with a digital signature tool based on a Trusted Execution Environment (TEE).

Tokenized Currency Is A Fundamentally New Means Of Payment

Despite the relatively active piloting of projects, experts keep arguing about the advisability of a new form of money. Skeptics believe that government digital currencies risk remaining in the status of a marginal legal tender for a limited number of economic agents.

According to Thomas Moser, board member of Swiss National Bank, the distributed ledger provides confidence when working on projects where there is no central counterparty; therefore bitcoin is a good example of using this architecture. But if you have a central bank that you trust, then it will be very difficult to justify the need to use blockchain in such a financial system.

The universal properties of CBDC include, for example, a reduction in the cost of conducting transactions in comparison with non-cash turnover. This effect can be achieved if the scale of the use of the new technology is tangible.

From the point of view of corporate settlements, there will be functionality for end-to-end tracking of transactions through all credit institutions and automatic execution of a transaction when conditions predetermined by the parties – smart contracts – occur. This will simplify the administration of budget payments. The technology will reduce the risks of using shadow schemes to a minimum, provide guaranteed targeted delivery of targeted payments, including through the “labeling” procedure.

Finally, all users receive a higher level of safety of funds.

On the other hand, the state will receive about an ideal instrument for exercising control over cash – at the moment, the most “decentralized” medium of exchange. Transparency and ease of tracking are probably the most beneficial properties of CBDC for any regulator.

It is unlikely that these problems will help to solve the digital format of the currency. Consequently, the demand for conventional cash will remain together with the direct control of the regulator over the issue of cash, regardless of the level of interest in new tokens.

As a specific motivation for the introduction of the digital version of the ruble into circulation, the possibility of replacing the SWIFT system against the background of sanctions pressure and threats of loss of payment sovereignty is increasingly cited.

The global transfer of international settlements to the blockchain or other types of new registries is possible only if such an infrastructure works in key countries participating in world trade. In addition, all solutions and platforms of central banks must be interoperable and mutually recognizable. It is not worth excluding such a prospect, but it is too early to talk about the timing of its implementation.

The introduction of CBDC in the second-largest economy, one of the most populous and digital countries in the world can create excellent conditions for the rapid development of a new means of payment. By February 2022, China is ready to showcase the digital yuan e-wallet to the general public. 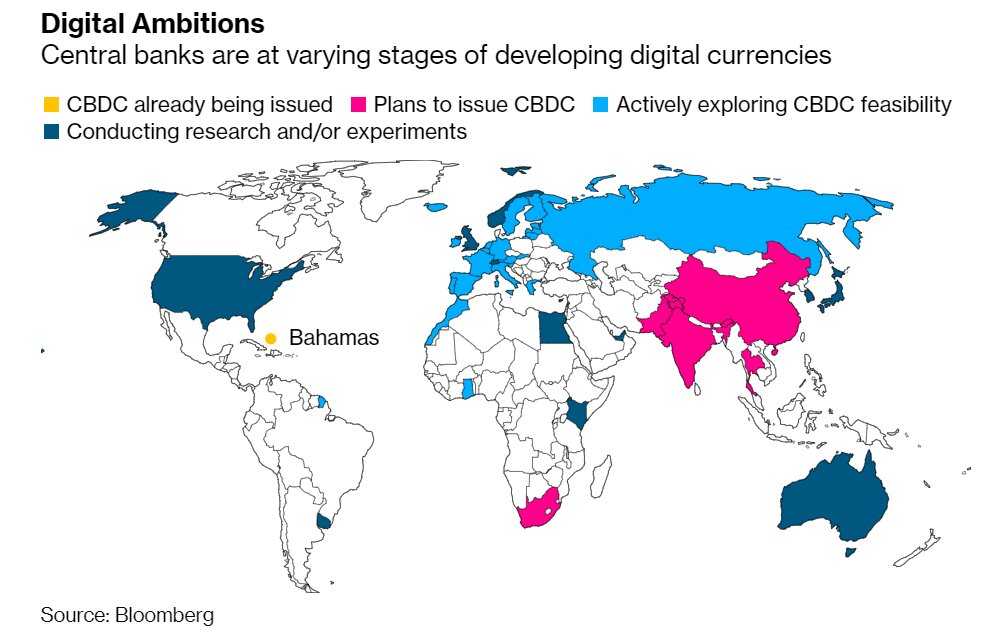 In terms of configuration, the DCEP (Digital Currency Electronic Payment) toolkit is similar to most similar projects. China’s tokenized currency is a direct claim on the central bank. That is, in fact, it is a substitute for cash.

Distribution will be organized according to the standard two-tier banking system model. Issuer – People’s Bank of China. Credit institutions and other financial intermediaries, that is, “authorized operators”, will be engaged in the distribution, since they already have the necessary infrastructure. They are required to monitor compliance with KYC requirements. At the same time, the central bank will only periodically receive and store copies of information about retail holders of digital currency and their transactions.

The architecture of the product will be hybrid, but there is no strict requirement for the use of blockchain technology. Retail players can volunteer to implement it when developing applications, for example, to organize processes for recording and reconciling transactions. The condition for the system operation is the throughput parameter – processing of at least 300 TPS. While most of the infrastructure will operate on the standardized databases of the regulator.

One of the features of the digital yuan will be the ability, in some cases, to maintain the status of anonymity. The option implies the use of limited wallets without specifying a username and other personal data. But, the weaker the KYC requirements for the token holder, the more stringent restrictions are imposed on the size of transactions performed. Operators, in any case, will be obliged to track and transmit data about the actions of the client to the issuer. He, in turn, will monitor compliance with the requirements of anti-money laundering legislation.

The Swedish Model Of Trust

If the Chinese strategy implies a more aggressive rejection of cash in physical form, then, for example, Sweden faces the issue of compensating for the reduction in banknotes in circulation. In 2017–2020, a local increase in their number in money turnover was recorded. However, in the long term, the Scandinavian country will need to tackle a non-standard challenge. The Central Bank risks completely losing direct control over the emission of the national currency.

At the moment, there are already a number of offline stores in the country where cash is not accepted at all. The introduction of the digital crown will be the answer to this challenge.

In a piloted project, e-krona is a direct requirement for the regulator, Riksbank. The payment service operators will manage the transactions and the central bank will verify them. The architecture of the project is based on distributed ledger technology in partnership with Accenture on the basis of the Corda blockchain platform of financial services of the American consortium R3.

The Riksbank will issue tokenized currency, but, unlike the Russian model, it is stored in the wallets of financial intermediaries. Access to them is organized through remote identification tools. Also, in the future, it is planned to issue prepaid CBDC cards, which will allow making small transactions for tokens in offline mode, that is, in the absence of a connection with a digital wallet. 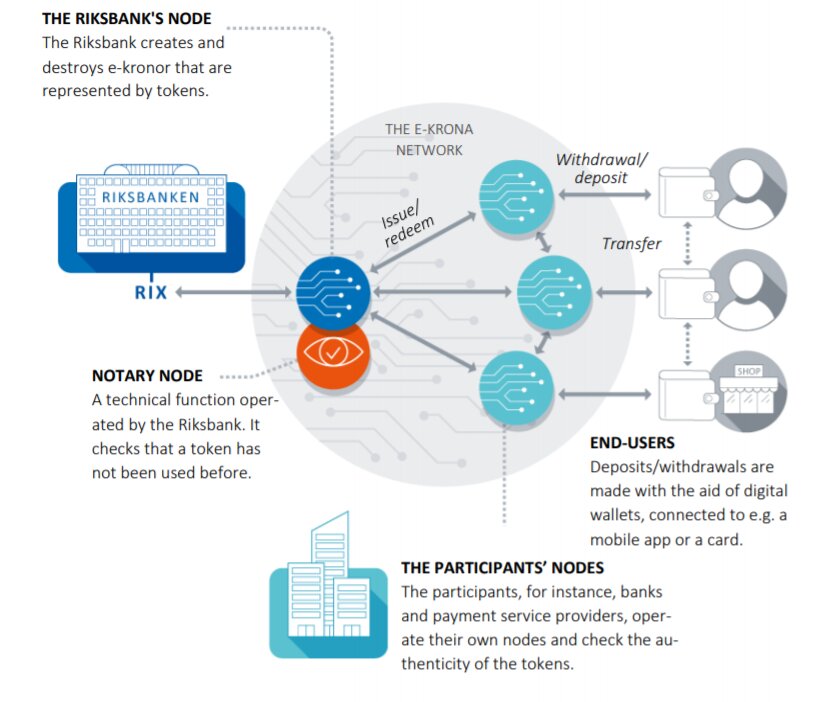 Also, the central bank is ready to provide for the preservation of the anonymity of transactions, both online and offline. The regulator will receive information about users’ digital balances and payments, but not personal information about the owner of the funds. Licensed financial institutions will be responsible for KYC compliance and due diligence (verification) of each of the CBDC users.

Projects to digitize the world’s two largest currencies, the US dollar and the euro, are still in their early stages of development. At the moment, it is known that both in the US and in the Eurozone CBDC will be supplemented by traditional cash. The use of new tokens as legal tender guarantees wide access of citizens, companies, and the state to innovative, cheap, and simple transactional services. In the future, they may become part of the global payment system.