The 21-week moving average shows the change of the bullish BTC market to the bearish one and vice versa, but in this particular case, there is reason to think about a false signal. In addition, other indicators indicate that the Bitcoin growth cycle is still only in the middle and the goal of $ 100,000 is still relevant.

If we remind March 2020, than we had a false signal and it was associated with Bitcoin collapse of against the backdrop of a fall in the stock market. This time, the correction began for two reasons: statements by Elon Musk about the refusal to accept BTC payment, as well as because of the local fall in the S&P 500 index.

Let’s start with the 21-week moving average that screams the beginning of the crypto winter: 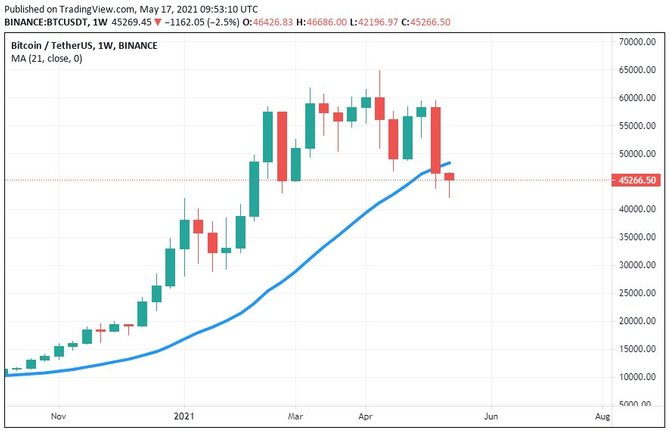 This is what the transition to a bear market looked like in 2018, based on the same line: 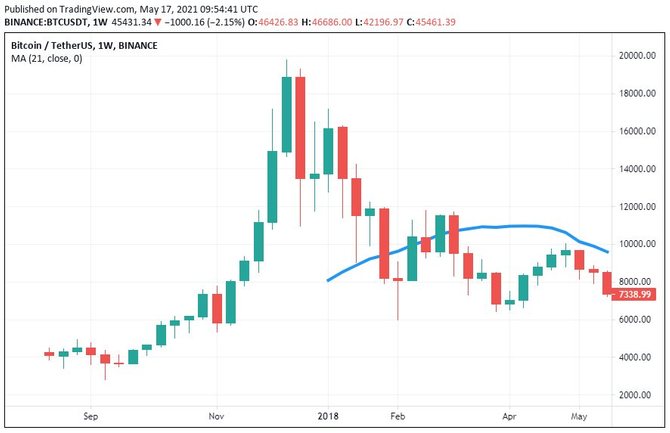 Further, the price moved below it until March 2019, the crypto winter lasted almost a year and the fall in bitcoin was more than 80% from the previous maximum. Why do we pay attention to this line? Because it very clearly shows a bullish or bearish trend in the crypto market right now. So it was in 2017 and history repeated itself in 2019, when they went down to $ 14,000: 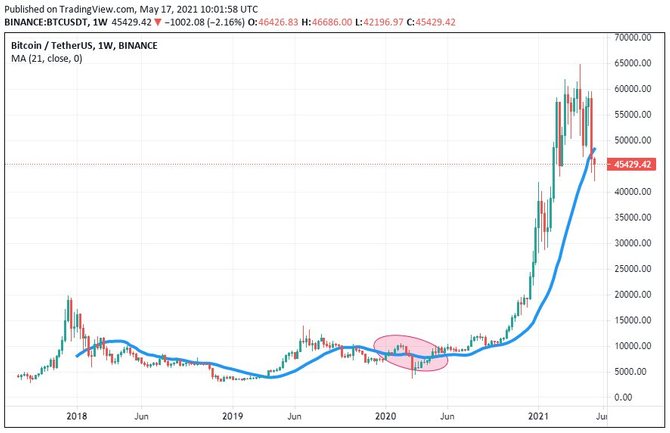 After that incident, the bulls returned to the market in January 2020. However, there was a glitch in March 2020 when the coronavirus crisis hit. And now it is extremely important to understand whether we are dealing with confirmation of a trend change to bearish in the long term, or this is again a fake signal, as it was in March last year.

In 2017, when the market turned bearish, no one really expected this, well, it would be more correct to say that the majority did not expect and there was no particular reason in terms of the news background. Back then, we only heard positive news of adoption and numerous bullish predictions that the market would reverse as soon as the Chinese New Year ended, the US tax period, and so on.

Today the situation is somewhat different. We have a cool news background in terms of the adoption of cryptocurrencies, all the largest US banks from JPMorgan to Goldman Sachs are looking for their options to enter the market. And although the regulator sometimes gives unpleasant signals, all these are purely words, and we are not talking about any purposeful actions against Bitcoin. We emphasize that against Bitcoin, the XRP story cannot have such a strong impact on the market.

If we draw parallels with March 2020, then we had a false signal and it was associated with the collapse of Bitcoin against the backdrop of a fall in the stock market. This time, the correction began for two reasons, the statements of Elon Musk about the refusal to accept payment in bitcoin, as well as because of the local fall in the S&P 500 index.

Further, bitcoin was not allowed to recover quickly, because rumors began to spread in the media about the claims of the American regulator to the leading crypto exchange Binance. Well, and then, already on the weekend, Elon Musk joined the game again, he blabbed a lot of everything there. For example, that Dogecoin could be better than Bitcoin and that Tesla is really thinking about selling its cryptocurrency.

As a result, we received a continuation of the fall towards $ 40,000, the correction from the current high of the price was already 35%, and the chart drew a signal about the arrival of crypto winter: 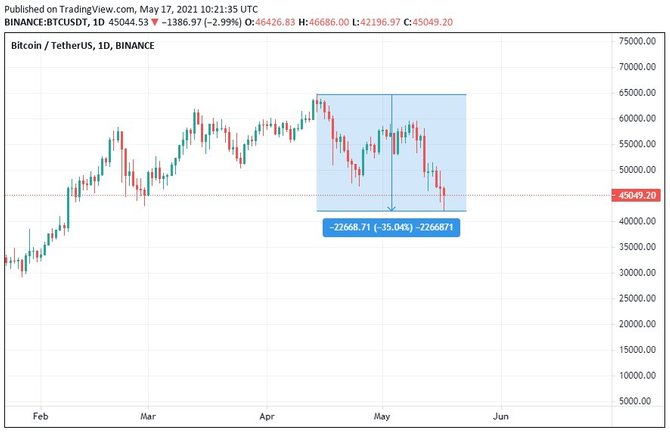 True, then Elon Musk, when he saw a lot of negativity in his address, decided to play for Bitcoin again and said that Tesla did not sell anything. The price immediately added $ 2,000, but is still below the signal line. To cancel the signal for a bear market, you should raise the rate to $ 48,500, or better immediately above $ 50,000 and gain a foothold at that level.

If we turn to the history of the previous bull market for Bitcoin, then altcoins gave many times more profit than the first cryptocurrency. And then we saw how almost all coins renewed their highs while bitcoin was already starting to slide into the abyss. Ethereum, XRP, and Cardano made highs in early January. Today Ethereum updated the previous maximum only at the beginning of February and grew from it by only 200%: 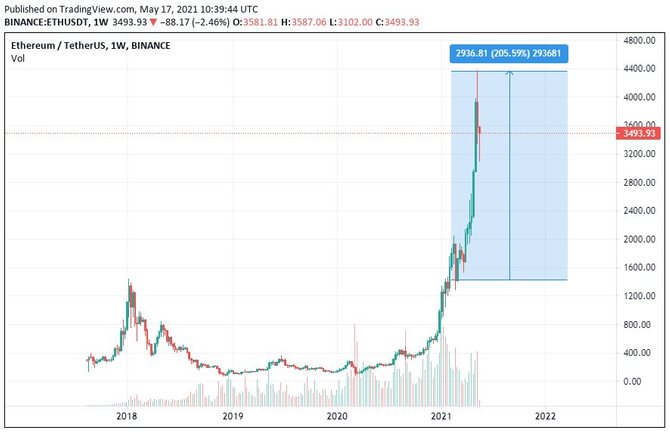 Cardano updated its maximum only at the end of February and has done only + 100% so far: 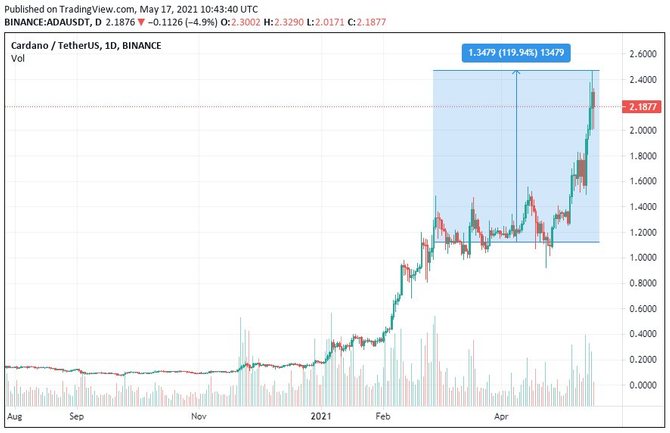 According to XRP, this goal remains unfulfilled so far and it would first grow to $ 2, and only then think about a new maximum. 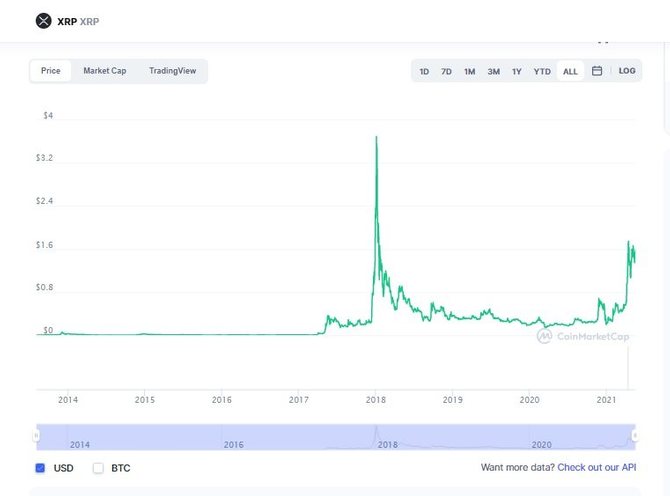 And since we are talking about altcoins, Dogecoin is not going to leave the TOP-5 cryptocurrencies. Elon Musk does not abandon his brainchild.

And there is good news for everyone who bought a Dogecoin clone SHIBA INU coin. Vitalik Buterin, who earlier arranged a sale off, thereby collapsing SHIB rate, now burned the remaining coins. The price reacted to the news with an increase of 50%.

On the graph of the share of bitcoin and other coins in the market, we see a beautiful drop to 37% in the summer of 2017: 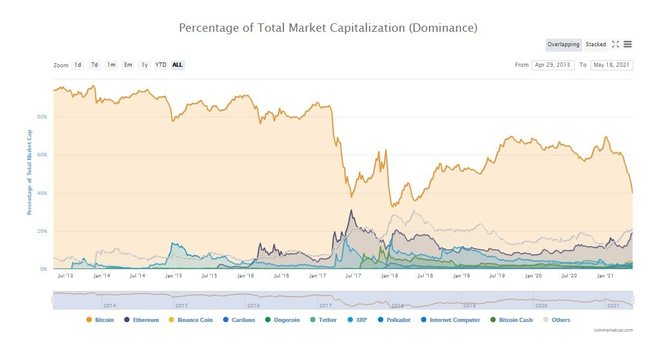 It was during this period that Bitcoin was on a 37% correction, which is comparable to the current fall depth:

And then the altcoins only managed to update their highs, when they began to fall again after bitcoin. Ethereum, for example, fell from $ 416 to $ 136 by as much as 67%:

Now we also see how altcoins are significantly losing in value and this is an indirect confirmation that the cycle has not ended yet.

Also, it will not be superfluous to recall the Stock-to-Flow model, according to which we never met the goal of $ 100,000, and in all previous cycles, it gave very accurate forecasts.

And its creator, PlanB analyst, notes that bitcoin’s relative strength index is now drawing a decline that was characteristic of the middle of previous growth cycles.

To summarize, the 21-week moving average quite accurately shows a change from a bull market to a bear market and vice versa, but in this particular case, there is reason to think about a false signal.

In addition, other indicators indicate that Bitcoin growth cycle is still only in the middle and the goal of $ 100,000 is still relevant. We do not know the future and cannot say that tomorrow the market will turn around and will fly straight up again, or vice versa, that now is the time to sell Bitcoin until it collapses.