Why is public service successful despite lawsuits, debts, and problems with regulators?

GameStop pump has put brokerage Robinhood in a tough spot. The company was forced to raise several billion dollars in a matter of days in order not to lose control over its own financial situation. However, this did not affect the plans for the IPO in any way. Investors and analytical companies predict Robinhood a successful public offering and an estimate of ten times the annual revenue of the service.

In January, users of Reddit platform organized the first “community pump”. They were actively buying low-liquid securities of Gamestop, AMC and other companies. Assets were selected based on two criteria: low liquidity and short hedge fund positions. So traders wanted to prevent the funds from capitalizing on the fall in the shares of these companies and in addition to making a profit.

The coordinated pump had a success. The price of Gamestop rose by hundreds of percent, and Nokia shares showed the largest weekly gain in seven years.

Due to the surge of artificially created interest in the market, a gamma squeeze occurred, and short players lost hundreds of millions of dollars. Gamma squeeze is similar to short squeeze, except that it uses derivatives instead of stocks.

What Is Gamma Squeeze

Short players also hedge risks. They, on the contrary, buy stock options. The logic is the same – if stocks suddenly start to rise, options will cover some of the losses. On the other side is the market maker who sold these options and is forced to buy the stock to hedge. This pushes the stock price up. In the case of GameStop, from $ 20 to $ 350 in just a few days.

The gamma squeeze can continue indefinitely until the market maker goes bankrupt or the regulator prohibits trading. It won’t take a small market maker long to go bankrupt: his reserves won’t last long. This happened with the brokerage service Robinhood – it had to urgently cover reserves with borrowed funds and temporarily suspend trading on some instruments.

The situation is unprecedented, so US regulators held hearings to find those responsible for the incident. The event was remotely attended by the head of Robinhood Vlad Tenev, the executive director of Reddit Steve Huffman, the head of the affected hedge funds Kenneth Griffin and one of the “initiators” of the pump Keith Gill.

The hearings were unsuccessful. Robinhood could not help but suspend trading due to the requirements of the SEC itself. Reddit isn’t responsible for its users and couldn’t stop them from buying securities, but overall prides itself on their cohesion. Griffin said that his company did not put pressure on the broker, and he himself learned about the suspension of trading only after it was announced publicly.

Numerous investors and pump organizers remained under the gun of the regulators. One of them, Keith Gill, is a professional financial market participant. His actions were interpreted as manipulation and his license was revoked.

Many members of the January GameStop pump used the Robinhood app. Therefore, as a preventive measure, Robinhood has temporarily suspended any volatile securities trading. The head of the company, Vladimir Tenev, explained that the broker was not pressured by the regulator or institutional players who suffered losses on short positions.

In order not to be bankrupt, at the height of the pump, Robinhood had to not only suspend trading, but also urgently raise money to replenish its reserves. The brokerage first raised $ 1 billion in one investment round and $ 2.4 billion the next day in convertible bonds. According to Bloomberg, Robinhood borrowed hundreds more from banks in the form of a line of credit. The New York Times clarifies that it is about $ 500-600 million from six banks. That is, in just a couple of days, the broker managed to find those willing to lend him more than $ 4 billion.

Lenders include JPMorgan and Goldman Sachs. The total number of investors who have taken part in financing a startup since 2013 has reached fifty. The last round was led by ICONIQ Capital, Andreessen Horowitz, Sequoia, Index Ventures.

Sequoia Capital fund even came under suspicion that it was who forced Robinhood to stop trading. This has written Reddit user who allegedly “spied” the correspondence between representatives of the fund and Vlad Tenev. Sequoia has denied the rumors itself.

The second “portion” of investments in the amount of $ 2.4 billion Robinhood raised in the form of convertible bonds, which will then allow investors to get shares of the company at the IPO with a 30% discount. Or without a discount if the market capitalization exceeds $ 30 billion.

The startup filed for an IPO in mid-March and plans to go public at the end of 2021. The service will conduct an unusual IPO. Retail investors will be able to buy Robinhood shares on the primary market right in the broker’s app.

Despite the problems with reserves, Robinhood’s rate is growing. Robinhood remains the most highly anticipated stock on the secondary market, according to analyst firm Rainmaker. 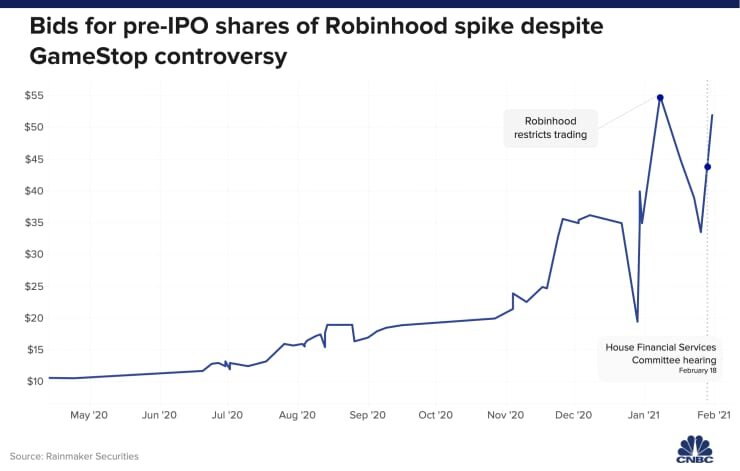 It turns out that the funds, which gave money to the broker in January, secured a discount for the purchase of shares in advance, which can then be sold several times more expensive. Investors themselves do not hide this: one of them told CNBC that he and his partners believe in a successful IPO of the broker, so they did not hesitate to take advantage of the opportunity to “get a discount”.

Where Does Money Come From

When Robinhood got a loan in January, Vlad Tenev assured that the financial stability of his company should not be a cause for concern. At the same time, the key financial indicators of Robinhood’s activities are unknown – the broker applied for an IPO confidentially, therefore it is not obliged to publicly disclose its financial statements.

The main source of income for Robinhood is payment for order flow or payment for order flow. The essence of PFOF is that the brokerage service cooperates with other market participants and market makers by selling custom orders to them. Tenev claims there are no hedge funds among them that lost money in the GameStop rally. Most of the rest of the income comes from premium accounts and margin lending.

Payment for order flow is a controversial but legal practice in the United States. The head of Robinhood notes that in addition to them, PFOF is used by other brokers: Charles Schwab, E * Trade and TD Ameritrade. However, according to Forbes, the company manages to earn 10 times more money on the flow of applications than other brokers. The same data is provided by CNBC. 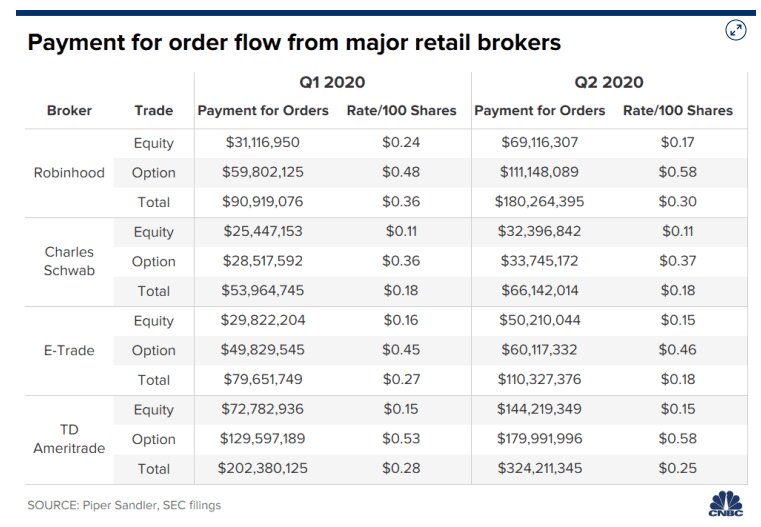 This is not due to large trading volumes, but due to the high percentage that Robinhood takes from market makers. By the way, Charles Schwab and TD Ameritrade did not suspend trading in viral stocks – brokers have been working on the market for a long time and their capital volumes help to avoid loss of solvency.

PFOF is banned in Britain and several other countries, so Robinhood never made it to the local market. The abuse of PFOF has already led Robinhood to litigation at home – the US regulator FINRA accused the startup of “not providing customers with better pricing.” In addition, last year, the US Securities and Exchange Commission (SEC) charged the broker with concealing the fact of cooperation with trading firms. For this, Robinhood was fined $ 65 million.

Robinhood made nearly $ 700 million from PFOF last year, according to a broker’s report to the SEC and estimates by The Block. Since the third quarter, the brokerage’s PFOF has grown 21%. Moreover, the volume of orders for options is the largest segment of Robinhood’s income, which has been increasing every quarter. Recall that it was the options that led to the gamma squeeze, due to which the brokerage service was on the verge of bankruptcy. 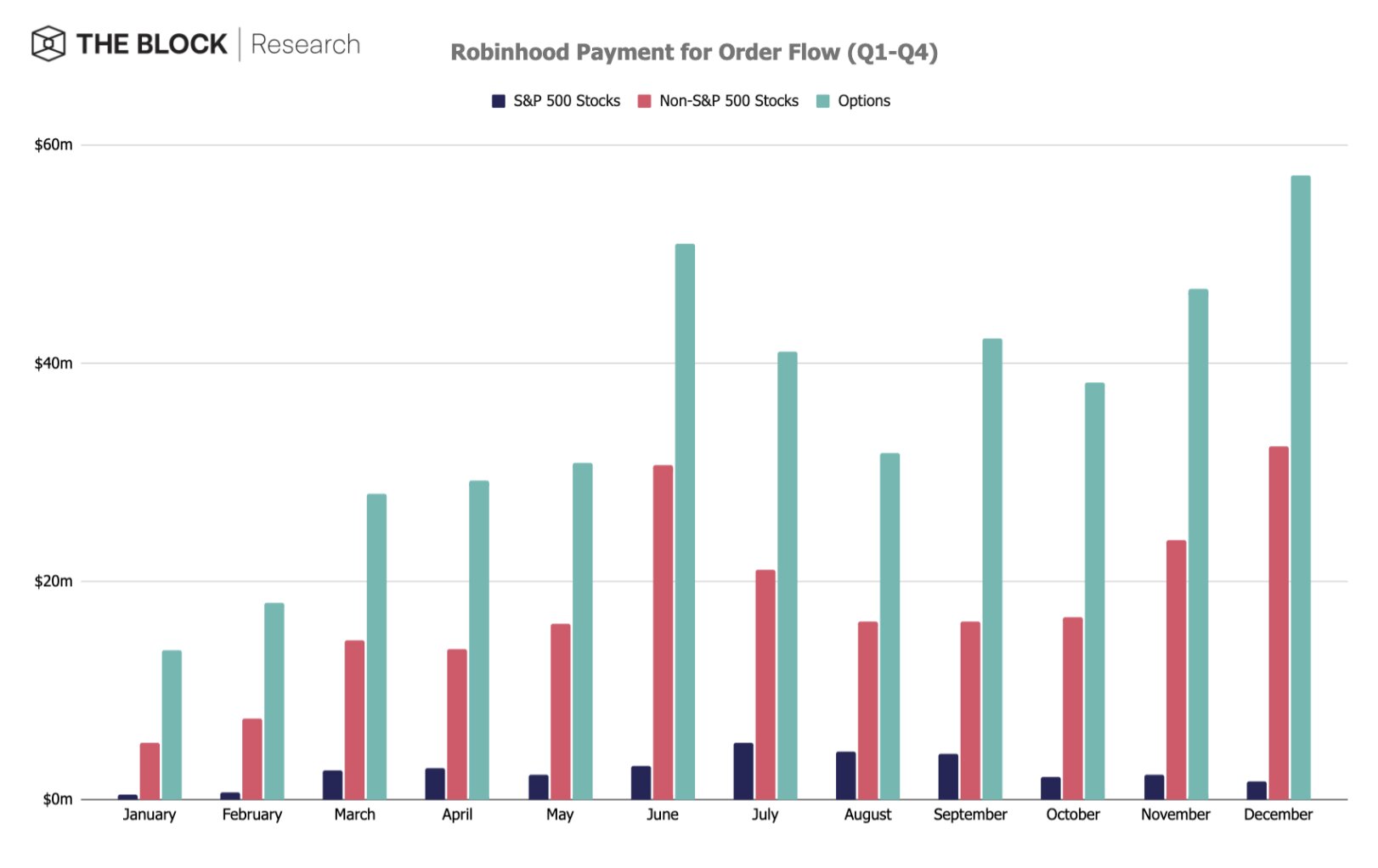 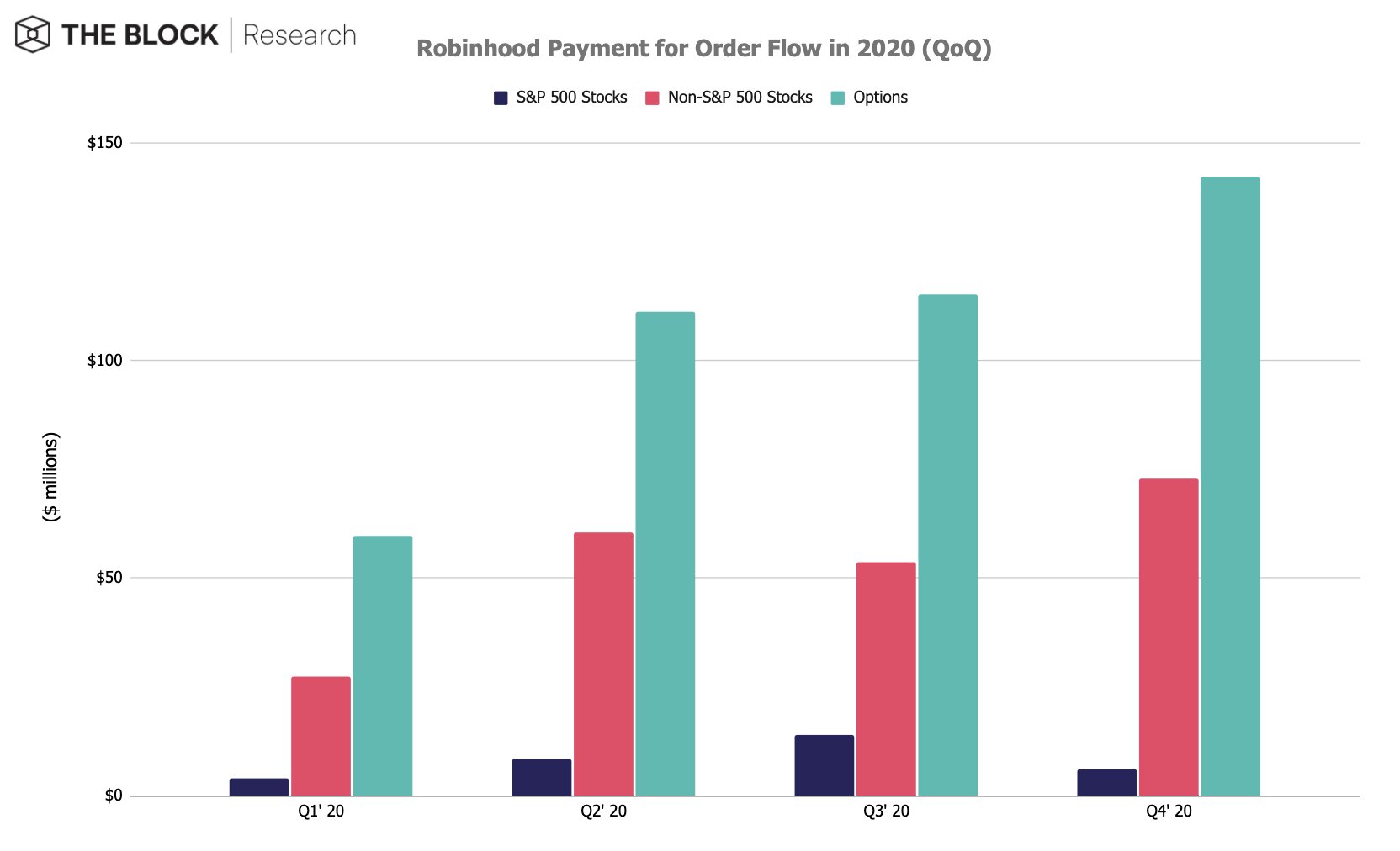 It turns out that even if Robinhood’s annual revenues reach $ 1 billion, in the last investment round it managed to attract at least 4 times more. Moreover, some investors are confident that the cost of the service can reach $ 40 billion. Although the analytical company PrivCo publishes a more conservative estimate of Robinhood – $ 10 billion. But this is still many times more than what the service earns, even from the most optimistic point of view.

Customers And Regulators Are Not Satisfied

The service now has 13 million users. Most of Robinhood’s clients are not day traders and gossip stock lovers.

The suspension of trading angered many Robinhood users – this approach does not correspond to the principles of the free market. This is contradicted by the mission of the service itself – “democratization of finance” and investment available to everyone.

After the GameStop incident, nearly fifty lawsuits were filed against Robinhood. Investors filed collective and individual applications to the court. Most of the claims are related to financial losses due to the suspension of trading. For example, Patrick Krasovsky of Illinois claims to have lost $ 220,000 on Robinhood restrictions.

The claims were filed not so long ago, so they have not yet been reviewed by the court. However, as MarketWatch notes, any legal action against Robinhood can be dismissed due to the user agreement clause – the so-called arbitrage clause. If a conflict arises between the service and the user, the parties should try to resolve it out of court. Few people read the entire agreement – it turned out to be in the hands of Robinhood.

However, users are not the only ones who are unhappy with Robinhood. The company’s actions during the pump drew condemnation from lawmakers. In particular, Democratic Congresswoman Alexandria Ocasio-Cortez called for an investigation into the legality of Robinhood’s decision. Senator Ted Cruz supported her proposal. In addition, Ocasio-Cortez personally interrogated Tenev at a hearing on 18 February.