The diversification of a company’s revenues through digital asset transactions is no longer surprising. On the contrary, it attracts clients from generations Y and Z, facilitates entry into open markets. Moreover, it turned out that traditional monetization models sometimes carry no less risk than cryptocurrency ones.

There is a convergence in the product lines of both fintech companies, similar positions have appeared. For example, neobank Revolut, offers its clients a service for trading in the stock market. In addition, each of the companies opened access to cryptocurrencies.

We have to note that American and British businesses were comparable in terms of user numbers by the end of last year. However, the online broker’s income was more than three times higher than the result of the work of the neobank. Ignoring some aspects of the methodology for accounting for active users, we can say that Robinhood had $ 82 in revenue per client at the end of 2020, while Revolut had $ 21.

Online broker Robinhood was on the verge of ruin over a pump of shares in the American video game company GameStop in January. The service had to raise several billion dollars in order not to lose control over its own financial situation.

However, Robinhood remains one of the most popular brokerage services in the United States, with nine out of ten new private investors from that country trading on the platform. This allowed yesterday’s startup to reach the NASDAQ. The initial public offering of shares took place on July 29 and passed along the lower border of the value corridor – $ 38 per share.

The first days of trading were unsuccessful, the company’s capitalization fell 8% below the IPO level. The rescue came from where no one expected: in early August, Robinhood shares surged to $ 70 after their massive purchase by the ARK Innovation ETF.

Before the IPO, a prospectus was posted on Securities and Exchange Commission (SEC) website, in which Robinhood detailed the financial statements. At the end of 2020, the company’s revenue increased immediately 3.5 times to $ 958 million, net income amounted to only $ 7.5 million.

However, it is not yet possible to fix the result for a long time. In the first half of 2021, the online broker’s revenues exceeded $ 1 billion, and the net loss for the same period reached almost $ 2 billion. According to the statements, it was formed against the background of increased costs from the revaluation of the fair value of the company’s shares-convertible loans issued before the IPO.

The number of active Robinhood clients has grown: as of the end of the first half of 2021, 21 million people used their service every month, which is twice as much as a year earlier.

How Do HYIP Brokers Make Profit?

The main source of income for Robinhood remains the flow of applications. In the case of stocks and options, we are talking about the Payment for order flow (PFOF) model, with cryptocurrency – Transaction Rebates.

PFOF lets you opt-out of direct commissions from customers – a winning marketing ploy. Instead, the online broker receives a percentage of the sale of orders to market makers. The latter share with him part of the profits. At the same time, market makers have the opportunity to expose the transaction price to the client, which is unfavorable for him. For example, in the UK, as well as Canada and Australia this practice was banned several years ago.

Similar questions arise when using the Transaction Rebates model. Robinhood writes that its income is a fixed percentage of the nominal value of a cryptocurrency transaction. Therefore, a part of the spread is returned to the broker as an intermediary.

The size of the Rebate or “cashback” varies depending on the crypto exchange or currency trading service. The parameters of the company’s agreements are not known; only “return” rates for individuals can be found in the public domain. But the final beneficiary – the investor – suffers not only from the overstatement of the rate. Its potential income is reduced due to the opaque mechanism for determining the price at which the transaction is carried out. This creates a conflict of interests between the client, the broker and the exchange or market maker.

Also, from 6 to 8% of income the mobile broker receives from subscriptions to premium Robinhood Gold accounts. Their owners have unlimited access to borrowed funds for trading on exchanges – Robinhood itself acts as a creditor. “Advanced” customers of the service pay a monthly fee of $ 5 per month, as well as 2.5% per annum of the amount of the margin exceeding $ 1,000.

Almost a fifth of the company’s revenue for 2020 is net interest income. It is formed at the expense of margin lending and from the deposit accounts of the company itself, minus the costs of servicing credit lines.

Revolut has become arguably the most fashionable neobank in the UK in just a few years. During 2020, he actively entered new markets. The company launched banking services in Lithuania and Poland, added the ability to integrate third-party bank accounts into the Revolut app for UK and EEA customers. In addition, some services have become available in Japan and United States.

The reason is the additional costs associated with expanding the business. In 2020, they grew from £ 125 million ($ 173 million) to £ 266 million ($ 369 million), with almost two-thirds of the amount spent on employee salaries.

How To Keep A Neobank Afloat

Unlike the brokerage business, the main source of income of neobanks is the commissions charged from users. Revolut is no exception. A significant part of its revenue came from commissions for payments and service of cards, as well as interchanging. The share of this source of income exceeded 36%.

About a third of the fintech company’s revenues in 2020 were obtained through other paid services – currency exchange and securities transactions. Together with commissions from transactions with cryptocurrencies, this article reached £ 80 million ($ 111 million). The amount of remuneration for operations with tokens, by the way, is up to 1.5%.

In addition, clients pay a fixed amount for exceeding the free limit of transactions when trading on exchanges. You can cancel the restriction, like that of Robinhood, by upgrading your account. It can cost anywhere from € 3 to € 14 per month.

Revolut’s interest income is included in the remaining 4% of revenue.

The growth of the cryptocurrency market in 2020 affected the income of both “HYIP” companies.

For example, digital assets helped Revolut adjust its losses for last year. Thanks to the revaluation of the value of tokens, the company’s revenue increased by £ 39 million ($ 53 million). Exactly how much the financial service earned on crypto commissions is not specified in the report.

Most of Revolut’s crypto revenue continues to come from UK customers. In the US, neobank intends to scale up digital assets with the support of Paxos. 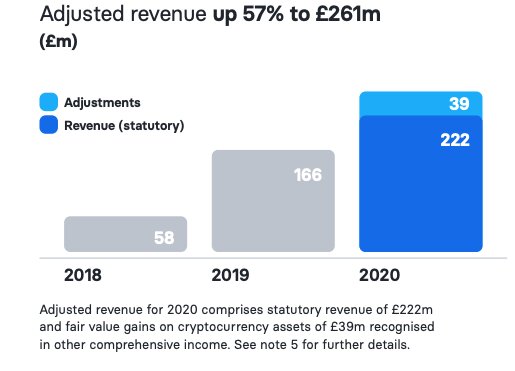 At Robinhood, in turn, the share of cryptocurrency in the total value of customer funds at the end of 2020 was two times lower – 5.6%. Although in absolute terms, this article was several times higher than the “successes” of the British neobank – $ 3.5 billion.

Judging by the new reports for the first half of 2021, now the mobile broker will have to follow the market dynamics even more closely. The value of client portfolios of alternative assets has grown significantly. The share of cryptocurrencies exceeded 22% or $ 22.7 billion at the end of the first half of the year.

Robinhood crypto platform was used by 9.5 million customers in the first quarter of 2021. They have provided the company with a turnover of $ 88 billion over the past three months.

Revolut’s current model of monetizing its business through commissions and paid subscriptions is widespread. This also applies to services related to cryptocurrency operations, which, as a result, accounted for less than $ 110 million in revenue last year, or up to 30% of revenue. There is no exact data.

Accelerated growth in the share of net fee and commission income is observed not only in the segment of digital financial services, but also in traditional banking. Large lending institutions around the world are building ecosystems of non-core services around themselves, which reduces the relative weight of interest income and the dependence of businesses on volatile monetary conditions. On the other hand, this leads to the fact that bank clients are forced to bear additional risks that are not covered by compulsory insurance funds anywhere.

The future of Robinhood’s earnings is far more worrying. In late August, it became known that the US Securities and Exchange Commission (SEC) intends to completely ban the PFOF model due to cases of price discrimination.

The abuse of PFOF has already led Robinhood to legal action. The company was accused of being able to receive a significantly higher percentage of market maker spreads from 2015 to 2018 compared to other brokers. At the same time, the regulator finds it difficult to name any cases of direct harm to investors among clients of the American service.

Despite the fact that a similar conflict of interest lies in the format of cooperation based on crypto-rebates, at the moment nothing is known about the SEC’s ability to stop this practice. Primarily because the market for tokenized assets is, in principle, poorly regulated.

Therefore, it can be assumed that if the PFOF model is banned, Robinhood risks losing $ 200 million, or 40% of its quarterly revenue. That is how much he earned by selling orders to market makers from April to June 2021, excluding the “crypto-cashback”.

Monero Holders Can Participate In Yield Farming On Sienna Platform

4 Secrets For A Successful Trading TOP-4 Profitable Altcoins In October. Part 2 TOP-5 Cryptocurrencies You Need To Get Rid Of Right Now China Doesn’t Intend To Ease Pressure On Crypto Community Research: 40% Of Countries Are Into Studying The Prospects For Digital National Currency Issuing Research: 2Q Of 2021 Was A Record For NFT Market Ethereum, Cosmos, Shiba INU: Cryptocurrency Rate Review Should You Sell SHIBA INU: 5 Compelling Reasons Continuation Of Bitcoin Bullish Trend: BTC Forecast On Elliott Waves What Cryptocurrencies To Invest $ 1,000 In 2021 Bitcoin Forecast For Summer 2021: What Price Robert Kiyosaki Will Buy BTC When Kittens Took Over The Internet, DOGE Took Over The Crypto Market
Show more Hide