How Demand For Bitcoin Has Changed Over The World

Africa was among the leaders in terms of the total volume of cryptocurrency purchases.

During the period of positive movement of the bitcoin rate, the volume of purchases of cryptocurrency in Africa has shown an increase. Amid the growing interest of residents of the continent in digital assets, large investors began to invest in local startups. For example, Yellow Card, a cryptocurrency buying solution provider supported by popular digital asset exchange Binance, recently managed to attract $ 1.5 million in investments from companies such as Polychain, Andreessen Horowitz and Celo, Forbes reports.

The startup team, in a media interview, talked about “extreme growth rates.” According to them, young Africans are showing particular attention to cryptocurrency. Yellow Card representatives believe bitcoin will unite African people.

Bitcoin will unite Africa in a way that telephones, the Internet, and other technologies never could. ⚡🌍

The change in Bitcoin volume for local fiat in African countries is different:

The most active demand for BTC is growing in South Africa and Kenya. The situation in Nigeria is different from other countries. The demand for bitcoin in the jurisdiction went into positive motion after a serious decline in late 2019 – early 2020.

Meanwhile, many other countries around the world are also seeing an increase in BTC purchases against fiat.

Citizens of South American countries, including Argentina and Chile, are paying particular attention to cryptocurrency.

In the US, you can also see an increase in interest in bitcoin after a brief decline in the volume of purchases of cryptocurrency for US dollars. The positive movement began in May 2020 – against the backdrop of the BTC halving. 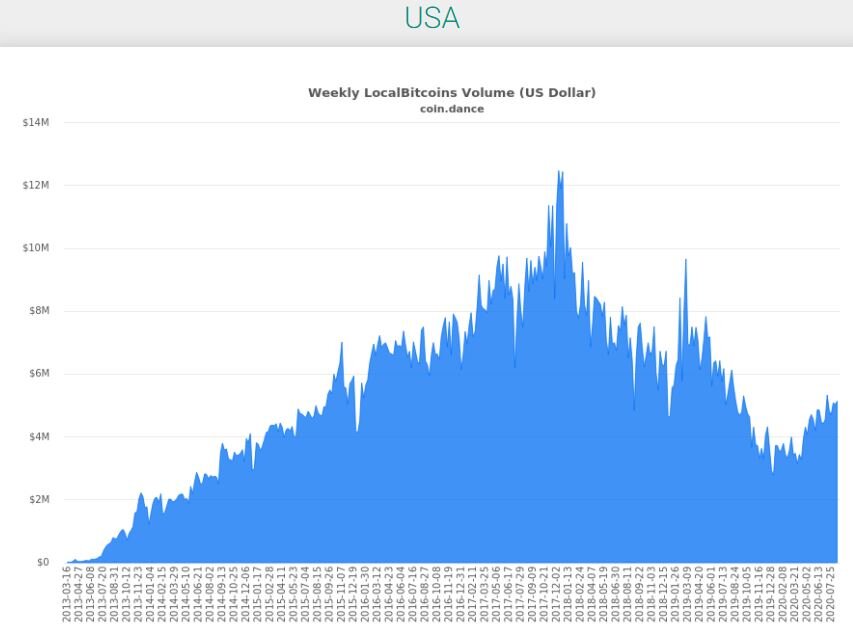 Decentralized Finance As An Alternative To Traditional Banks Bitcoin Forecast 2020: Where The First Cryptocurrency Will Ahead Will Bitcoin Drop Below $ 10,000? Investors Gave Forecasts On BTC How Will Bitcoin Price Change Until The End Of 2020 – Expert Opinions Unprecedented Growth: How To Invest In The DeFi Market How To Protect Your Personal Data From Leakage: Instructions Most Bullish Bitcoin Forecasts: Reversal Towards $ 20,000 Fintech And Greed: Why Do Digital Service Customers Choose To Pay Low Fees? Bitcoin Physical Coin – From Numbers To Reality What Is Double Spending Attack And How Does It Work Can Bitcoin Price Fall To Zero: Three Possible Scenarios What Does Libra Await: Expert’s Opinion On Facebook Crypto Project Future
Show more Hide