The Fed’s decision to raise the rate by 25 basis points. The markets reacted to it with high volatility, both for the S&P 500 and BTC, but still headed for growth. Our task is to understand how the economic situation in United States will develop in the future, and we will do this with an emphasis on cryptocurrencies. Will Bitcoin be able to take advantage of the current situation to return to long-term growth?

As a result of the recent Fed meeting, the rate was raised by 25 basis points. Markets have put the probability of this event at 97% and again they were not mistaken. There was a noticeable correction in the S&P 500 and Bitcoin immediately after this decision. All growth for the day was actually cancelled. But then came the press conference of Fed Chairman Jerome Powell. He gave the markets a decent charge of positive. As a result, the S&P 500 rose by more than 2% on March 16, and at the moment, almost all the losses over the past 30 days have been won back.

Bitcoin is also doing well and is trading above $40,000 at the time of writing.

The forecast for US inflation, which, according to February data, is 7.9% and this is a record for the last 40 years at the end of 2022 is 4.6%. Moreover, the Fed did not directly say that it was already a maximum, so it could still grow, but in the second half of the year there should be a clear downward trend. And the inflation rate planned by the Fed at 2% will only be reached in 2024.

In general, inflation for a long time, although the Fed spoke about the fact that its schedule would turn down for almost the entire second half of last year, and this has not yet happened. It is also not yet clear whether the FRS included in their inflation calculations the reverse effect of the imposed sanctions, the same gasoline in USA is now breaking price records, and although they bought relatively little volumes of Russian oil, it still has an effect.

The next important point, which will be in the future with the rate. If at the end of 2021 the Fed planned to raise the rate only three times during the whole of 2022.

Now Jerome Powell announced that there is a possibility of raising the rate at virtually every meeting, that is, six more times.

The next Fed meeting will take place on May 4, and the market is already pricing in a 62% chance that the rate will be raised by another 25 basis points. By the way, while there is a fairly high probability that the Fed will raise the rate immediately by 50 points – it is immediately given 37%. Here, probably, first of all, the regulator will focus on inflation data, how much it will grow in March. Nevertheless, such a statement that the Fed rate could reach 1.75% in 2022 has not yet scared the markets.

After all, Jerome Powell reassured everyone that there would be no recession in United States, because the economy is now strong and it will continue to grow. Although the forecast for GDP growth this year was reduced from 4% to 2.8%. That is, you understand the beauty of the game: Powell says that there will be no recession, but at the same time it’s not bad to lower the forecast for GDP growth and warn that he won’t cope with inflation quickly. But the main thing is that the markets believe him and think about whether we should buy more shares while it’s cheap.

And the key point, which so far everyone has decided not to pay attention to, is that tapering has already been officially completed, and the Fed is not printing new dollars. But reverse tapering, that is, the sale of assets from the Fed’s balance sheet, may begin as early as May. In total, they now have almost $ 9 trillion in various bonds and other securities bought from the market so that it does not collapse: 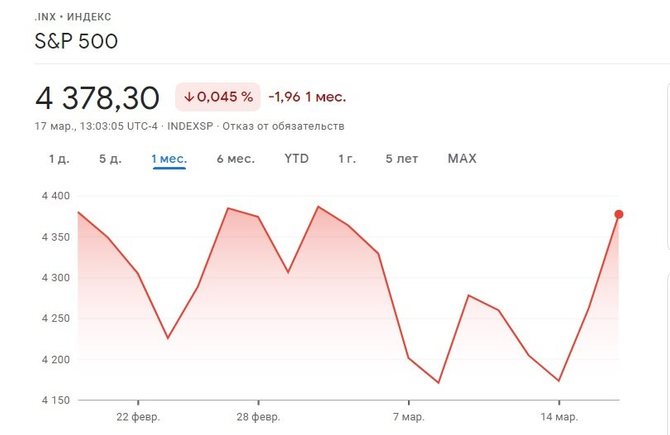 Note that at the beginning of 2020 it was only $4 trillion, but for the past two years the printing press has been running non-stop. Now the Fed will take liquidity from the market by selling its assets and withdrawing previously printed dollars. How strong the impact of these processes will be on the market will become clear in May, because plans for the sale of assets are still unknown. So far, only one conclusion can be drawn – the more they sell, the stronger the blow will be and bitcoin will not stand aside, because the Americans will simply not have extra dollars to invest in the cryptocurrency market.

Let’s start with a short-term forecast the picture is generally bullish. The contraction momentum has worked upwards, for now we see some weakness on MACD and RSI buyers, but in general this is normal in terms of a short-term correction. The continuation of the growth will be confirmed by the price holding in the upper part of the channel along the Bollinger bands with the subsequent movement to the next resistance at $42,000.

Optimism is also added by the change in the situation on the daily chart: 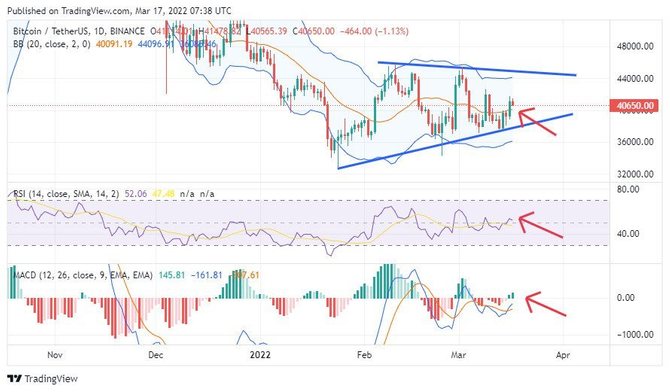 According to Bollinger, we keep the side trend for now, but the MACD shows a temporary initiative of buyers, it is also important that the RSI rises above 60. The key level for now is the support at $40,000. If it holds, then we can see growth not only to $42,000, but even up to $45,000, where the main resistance for the current flat is now: 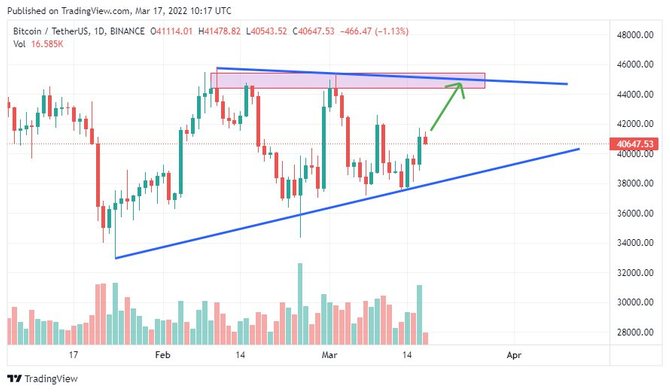 It is also worth paying attention to the fact that a triangle is being formed on the daily chart, it falls into the main resistance, but will we be able to get out of it, or rather in which direction. Because, according to the classics of technical analysis, such figures break through in the direction of the main trend, and it is now bearish. This is not a prerequisite, and there is an opinion that this is consolidation before growth, as was the case in winter 2019 and summer 2020.

Let’s see which of the analysts will be right, while we, unfortunately, do not see an increase in demand for Bitcoin, and this is very important. Google Trends data shows that Bitcoin popularity has fallen to the lowest levels of last year.

It is important to understand that humanity has not come up with a better asset to protect against inflation, and in some countries even hyperinflation, than Bitcoin. But people prefer cryptocurrency only when they have FOMO turned on, that is, when the rocket has already flown. This is how our psyche works and everyone must overcome it on their own, so that later they don’t buy high and don’t shout that I bought, but it all fell.

In light of the latest Fed decisions, we expect the correlation between the S&P 500 and Bitcoin to continue. But in our understanding, it will work more during the fall, the growth of the US stock market, bitcoin has been supporting rather weakly lately. This is explained by the low demand for cryptocurrencies, as just mentioned.

But the threat of a joint fall is quite large, because the optimism from the allegedly soft monetary policy of the Fed and their direct hints that we do not want to drop the markets with our actions, it can end very quickly. Especially when Fed starts taking liquidity from the markets in May.