Bitcoin and Ethereum have updated their ATH, and XRP is preparing to continue to grow, and we do not exclude that the rate will reach $ 2 or even $ 4.

Rumor has it that BNB and XRP intend to occupy the TOP-2, which is currently owned by Ethereum. Let’s see how realistic their plans are because Ethereum is also not going to stand still.

At the moment, Ethereum has made + 53% from the previous high in January 2018 and is showing the seventh consecutive green month, following Bitcoin: 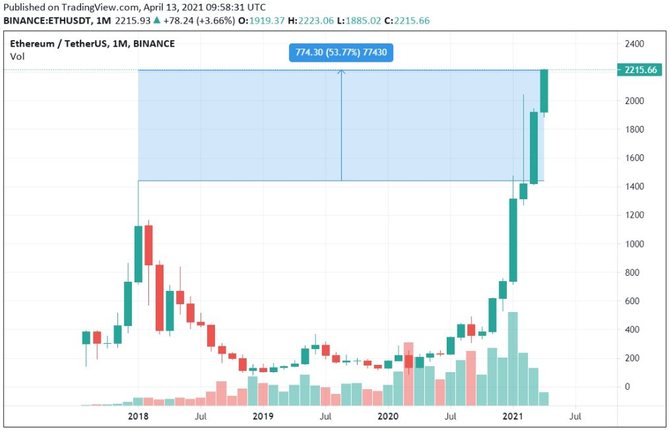 But this trend may intensify, and the cryptocurrency from Vitalik Buterin may go up faster than the market due to the following factors.

In the first place is the demand for it from institutions; on CME, Ethereum futures have been traded since the beginning of February:

Galaxy Digital also launched a fund on Ethereum for accredited investors, in which at the end of March it was $ 32 million. And Staked company presented a fund for investments in Ethereum 2.0, where they promise 8% per annum.

We also want to say that Berlin hard fork should take place, which is another preparatory step for the transition to the POS algorithm. As a rule, cryptocurrencies show growth before such updates, and after the event itself, a rollback occurs, so the rate may decline in the short term.

But Ethereum developers intend to intensify the transition to Ethereum 2.0, the next hard fork is scheduled for the summer. And the launch of the main network on the POS algorithm may occur before the end of 2021.

XRP cryptocurrency brings pleasant surprises almost every day. The main growth trigger is, of course, Ripple’s legal successes. First, the company’s lawyers secured the opportunity to edit some of the information in the documents requested by the SEC. And then again the court took their side and allowed not to provide the financial statements of the co-founders of the company, Brad Garlinghouse and Chris Larsen. As a result, we have a price of $ 1.63 with almost 200% growth since the beginning of the month: 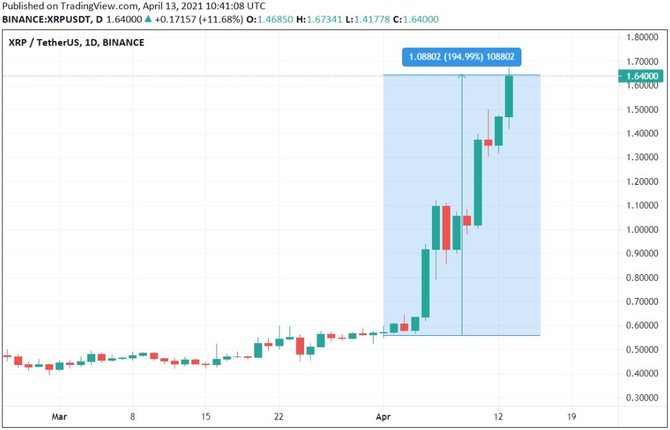 But that’s not all, against the backdrop of these victories, the founders of Ripple intend to completely dismiss the accusations against themselves, which in fact will destroy the entire line of the SEC. Does this mean that the SEC will squeeze its legs offendedly and withdraw all claims?

In fact, it is completely optional, it is possible that the regulator keeps other trump cards up its sleeve. But if we assume that Brad Garlinghouse and Chris Larsen will be withdrawn from the lawsuit, this will significantly increase the chances of an early settlement of the case, for example, with some kind of fine from Ripple and that’s it.

According to Ripple, they don’t admit to any accusations at all. But personally, we think that such a tough position is due precisely to the fact that the current SEC requirements are unacceptable for them, and if they are changed, the parties can return to the negotiating table. In addition, even before the start of the trial, Garlinghouse himself spoke of his intention to close this issue as soon as possible, and recently he was going to try to negotiate with the new head of the SEC, Gary Gensler.

What will happen to the XRP rate in case of favorable developments? Let’s count a little: if they give $ 2 for one coin, then the capitalization will be about $ 90 billion and XRP will return to the TOP-3 cryptocurrencies. And if the price goes even further to $ 4 in order to update the previous all-time maximum, then the capitalization will grow to $ 180 billion, which is quite normal for the current crypto market, even Ethereum will not have to move up from its second place.

That is, such growth is quite acceptable, moreover, it does not even need to complete the SEC lawsuit against Ripple. Indeed, at the moment it has no impact on the cryptocurrency market. And the recent successes of Ripple’s lawyers inspire confidence in the company’s victory, which is forcing XRP investors to accumulate more coins.

The so-called “XRP army” is actually a very large and purposeful community, which may well pump the price as well as traders on Reddit punished hedge funds in due time by staging an explosive rise in GameStop shares. And this factor cannot be written off, the more reasons XRP supporters have to believe in the victory of Ripple, the higher the price will be.

If it weren’t for the court, XRP would probably do exactly the same thing as Ethereum, pulling up to the January 2018 high and then even higher. Therefore, albeit for a short time, but the price of $ 3- $ 4 per XRP is real in theory. The only thing that can get in the way if the SEC wins and achieves a total ban on XRP.

But what we don’t believe in and why we don’t love Ripple is the story of how one XRP will be given $ 100 and $ 1,000 each, after this token becomes an international reserve currency. We do not know who invented this, but the network is full of such information with circumstantial evidence, which, in fact, does not stand up to criticism.

Believe in this or not – decide for yourself. And our disrespect for the Ripple leadership for supporting these rumors with their ambiguous statements. Although what can you take from them, as already said, they are just developers who pump the price of their token.

Bitcoin has finally updated its maximum price, which at press time is $ 64,513 at the average rate. To be honest, we were skeptical about this growth when it began on Saturday, and expected that it would only be possible to break through the resistance on April 14 if Coinbase successfully entered the stock market.

What does the bitcoin price tell us today? Resistance at $ 63,000 is officially broken and the uptrend is confirmed. 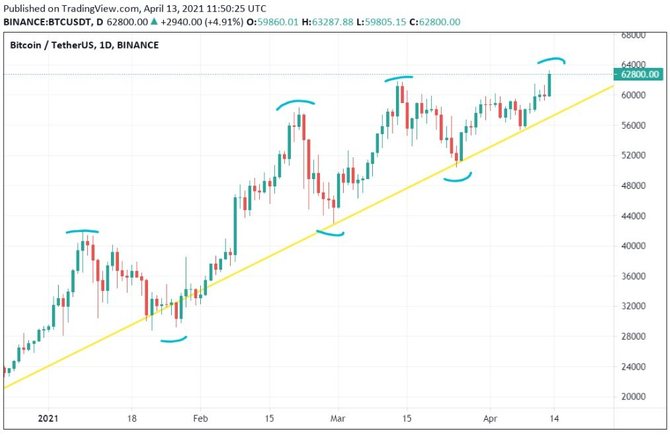 So choose for yourself what maximum to expect, and we will monitor tomorrow’s events around Coinbase. There is a lot of attention to it, and if the exchange fails during the listing of shares, then it can ricochet bitcoin. Conversely, success on the stock exchange will stimulate the continued growth of the crypto market.