Bitcoin correction opened up the opportunity for altcoins to start growth and setting new ATH. Let’s take a look at the two leading cryptocurrencies Ethereum and XRP and discuss which one is worth buying right now.

Ethereum has withstood the last Bitcoin correction with flying colors. The bulls managed to keep the price above $ 2,200 and since then the rate has grown by 17%, updating the previous maximum: 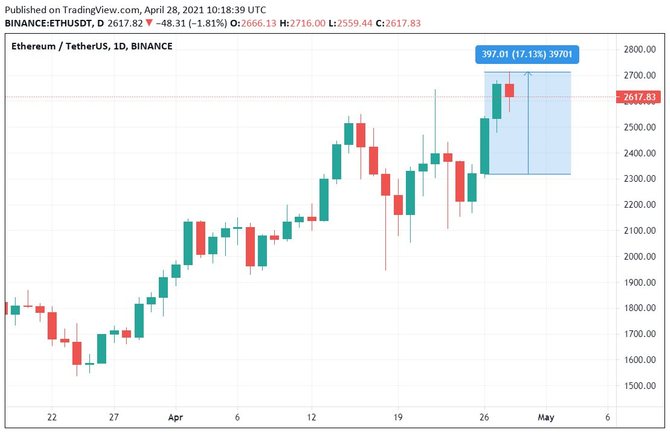 Note, that Ethereum, despite the fact that it retains the position of the TOP-2 cryptocurrency in terms of market cap, bears the stigma of disappointment now . Since the beginning of March, everyone has been talking about how the coin will go up and reach first $ 2,000, then $ 2,500 and then $ 3,000. To date, the first two goals have already been met, but the process is moving extremely slowly.

This is actually strange, and now many are waiting for acceleration. Judge for yourself, Ethereum is the only cryptocurrency other than Bitcoin, futures for which are traded on CME. Also, othere is a full-fledged ETF fund on Ethereum only, albeit so far only in Canada, but Bitcoin-ETF is also only in Canada and Australia. Everyone is waiting for the decision of the American regulator, but he continues to feed the market with promises.

However, Ethereum ETF is a fundamental factor that will ensure further growth in demand from large investors.
Another important factor in the future price growth is the upcoming London hard fork on July 14th. It was decided to include a scandalous update, which the miners opposed and even promised to go on strike, but apparently changed their minds. Plus – the very fact of the hard fork, this is another reason for the price increase. Five days before the previous Berlin update, the cryptocurrency is up 23%: 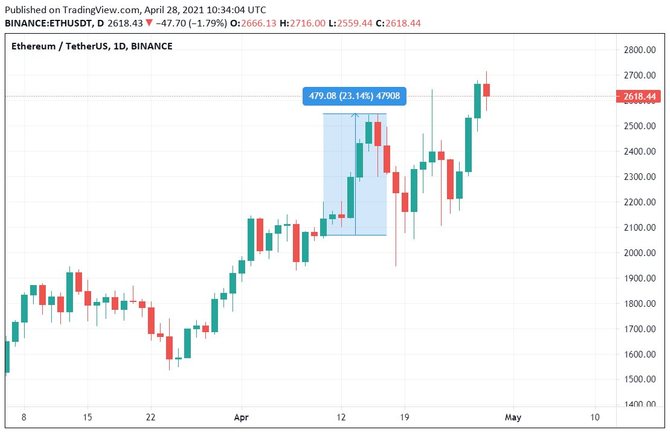 Will history repeat itself with London update? Historically, cryptocurrencies are growing ahead of important network upgrades. Also, do not forget about disgruntled miners, if there is a serious group of opponents and they announce their intention to split the network, that is, create another cryptocurrency, then the price will skyrocket even more, because everyone wants to get free cryptocurrency. But this is purely an assumption and nothing more and definitely not a financial recommendation.

And another factor for the price growth in the short term is the victory of the $ 115 million bulls on Ethereum options. Contracts for $ 930 million expire this Friday, and so far the majority is on the side of buyers.

XRP bulls also successfully defended their positions: the price was kept above $ 1, and after the Bitcoin reversal, the coin issued immediately plus 40%: 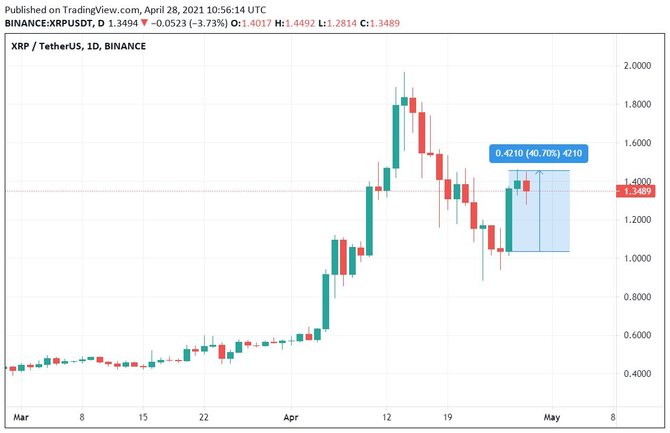 YouTube is already bursting with predictions that tomorrow, at least in a day, XRP will soar to at least $ 2 and go even further. True, the chart in recent days clearly repeats the movement of bitcoin, and the recent pump was fueled by the news of the refusal of foreign regulators to provide information to the SEC for the court against Ripple.

The market responds very well to any victories of Ripple’s lawyers, and to their credit, from the point of view of an outside observer, their positions look good.

Does XRP really have a chance to hit $ 2 anytime soon, like before Ethereum rises to $ 3,000? At the moment, XRP has formed support for $ 1 and the price is unlikely to go lower unless there is some kind of global correction throughout the market: 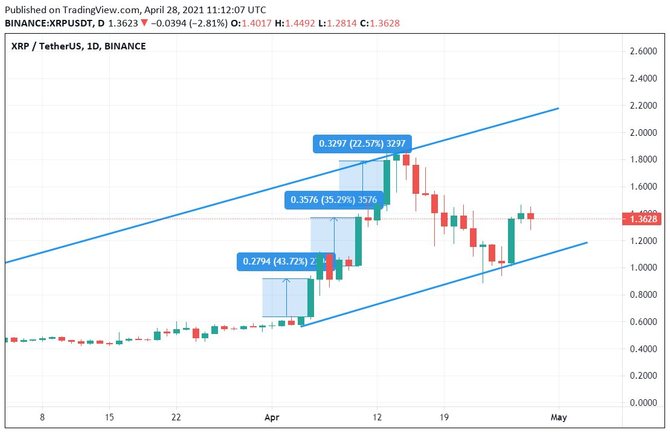 It is also worth noting the tendency of XRP to impulse movements of 20-40% per day. With the right news, this cryptocurrency may well exceed the $ 2 price in early May.

Which is better to buy right now, Ethereum or XRP?

Ethereum is already at its maximum values, the rate at the moment was rising above $ 2,700, but for a breakthrough by $ 3,000 it needs a good reason. For example, bitcoin at $ 60,000, if this happens, then at the end of the week when futures contracts will be closed. The market can play a cruel joke on those who do not believe in continued growth.

Whether on this growth XRP will also be able to overtake the market and reach $ 2, we do not know, as it seems to us, we need some other additional reason. Moreover, it can appear at any time. Therefore, in a period of a week, Ethereum looks preferable, but for a month in advance, it is probably worth betting on XRP.

As for the long-term goals for at least six months in advance, we will leave the forecasts that were given at the beginning of the year. For Ethereum it is $ 4,000, and for XRP it is about $ 4. Of course, everything can happen much earlier, if bitcoin is going to fly away by $ 100,000 in May, but I think the market will gradually go to new ATH.