Today Ethereum rate updated its ATH. Its growth began on January 22 the value of the cryptocurrency rose by 67%, reaching about $ 1850 over the next three weeks. 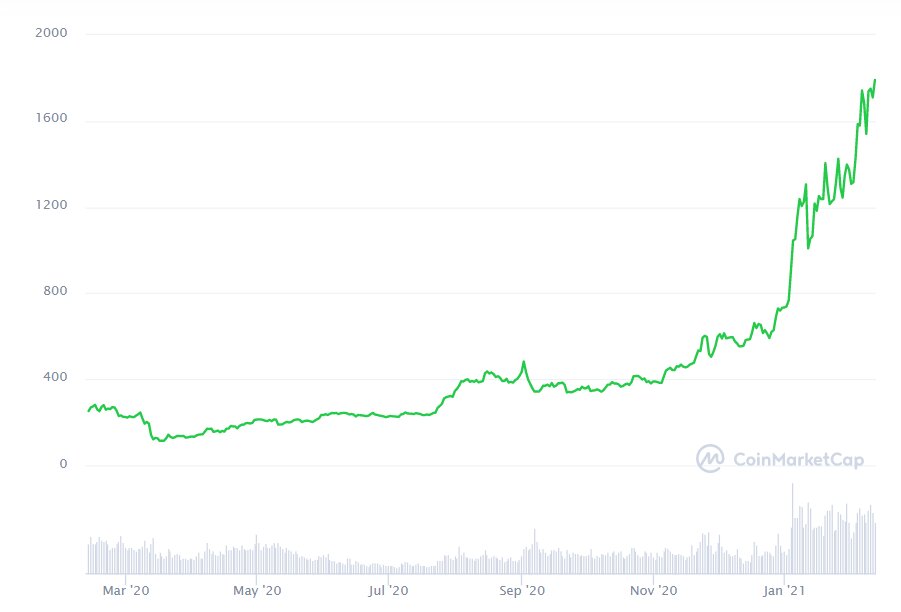 ETH has been in the green for the entire 2020. During this period, the value of the token has grown fivefold. However, experts are optimistic about its prospects and are confident that this trend will continue in the coming months. For example, analysts at Fundstrat Global suggest that the world’s second-largest cryptocurrency by market capitalization may keep growing to the $ 10,500 mark.

One of the reasons for the rapid growth in the value of ETH could be the long-awaited launch of the zero phase of the Ethereum 2.0 network. This has been postponed several times due to technical issues. However, on December 1, the first block was finally generated in it.

After the launch of ETH 2.0, the network began to use the proof-of-stake (PoS) algorithm. Due to upgrade, altcoin holders will be able to earn on staking – an alternative method of mining, in which network participants make a profit for blocking tokens on their account in favor of the validation mechanism.

The possibility of additional passive earnings attracts users and stimulates the growth of the cryptocurrency rate. For two months of work in Ethereum 2.0 more than 3 million ETH were blocked in smart-contracts. This has already led to a decrease in the annual staking yield from 22% to 9.3%, but the number of investors continues to grow. 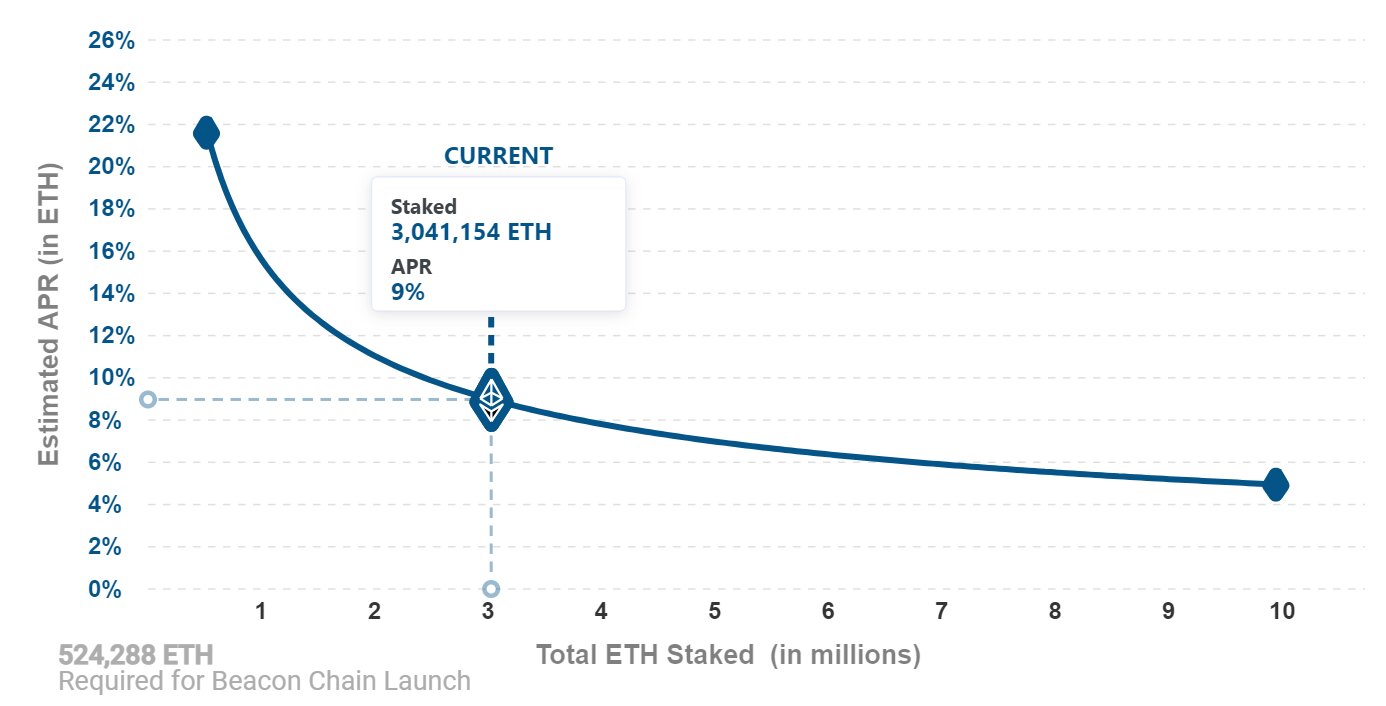 Bitcoin rally is another important factor behind the rise in the value of Ethereum. It has become a powerful driver for the entire cryptocurrency market, whose market capitalization in early 2021 exceeded $ 1 trillion for the first time. At the same time, the profitability of ETH is growing at a faster pace. So, since the beginning of January, the world’s largest cryptocurrency has risen in price by 54%, and ETH tokens have grown in price by more than 70%.

Messari analysts suggest that the launch of Ethereum futures will attract the attention of institutional investors, and investments in this cryptocurrency from large market participants can positively affect its value. Analysts from the Norwegian company Arcane Research have a similar opinion.

Once you accept that Bitcoin may be valuable, it opens your mind to the possibility that other cryptoassets may also be valuable.

It’s a much easier jump from $BTC to $ETH from there.

However, this may have the opposite effect, similar to what happened after the rapid growth in the bitcoin rate at the end of 2017. Then two Chicago exchanges, CBOE and CME, began trading futures for the largest cryptocurrency in the world. Many users began to actively short BTC, which quickly collapsed its value that time.

What ETH Can Hold Back

One solution to this problem could be the release of the ETH 2.0 protocol, which should cope with the limited network capacity and increase its scalability.

However, the launch of Ethereum 2.0 mainnet that has already taken place has not yet had a significant impact on the size of fees. Since the beginning of the year, their average daily size has already renewed its historical maximum, breaking through the $ 20 mark several times. As of February 14, it has dropped slightly to $ 15.

Lower fees can be a significant competitive advantage for other blockchains. For example, the volume of transactions in USDT on the Tron blockchain has confidently surpassed that on the Ethereum network since the beginning of January. Analysts speculate that this is due to the lower transaction fees at Tron. 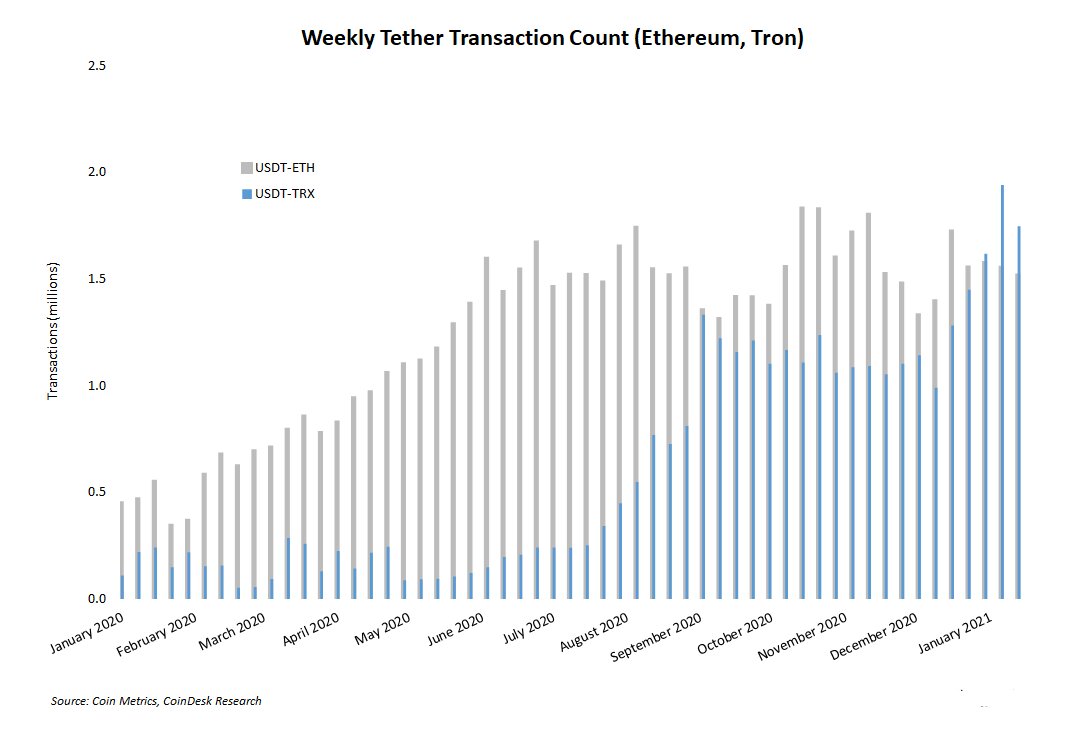 The solution to the problem of high fees may be the final transition to ETH 2.0. PoS significantly reduces the cost of the commission. This is due to the reduction in the cost of the mining process – instead of using expensive electricity, we will switch to a new consensus algorithm, in which the user will only need a computer and an Internet connection.

Now the size of the fees depends on the load on the network. So far, the miner receives both a commission and a reward for each mined block. However, when the EIP1559 update is implemented, the base reward will be burned, and the “tips”, that is, the reward for speeding up the transaction will remain with the miners. With the new monetary policy, ETH will become a deflationary coin.

When the final transition occurs, the problem with fees will be resolved, but it is difficult to predict when exactly this will happen.

Despite the December launch of Ethereum 2.0 phase zero, the network itself, in fact, is still in test mode. The activation of the Berlin update, with the release of which the new protocol should start full-fledged work, still has not happened. Its launch was postponed several times – initially it was supposed to happen in June 2020, but then it was postponed until the fall, and later postponed to January 2021. This deadline also had to be postponed indefinitely – the developers claim that the update is almost ready to launch, but they still have not named the block number on which the hard fork will be activated.

Upcoming EIPs and the #Ethereum 1.0 roadmap

In 2020, one of the main growth drivers for ETH was the decentralized finance (DeFi) market – most projects on Ethereum blockchain. Over the past 12 months, the amount of funds blocked on it has grown 30 times – at the time of writing, it almost reached the $ 40 billion mark. 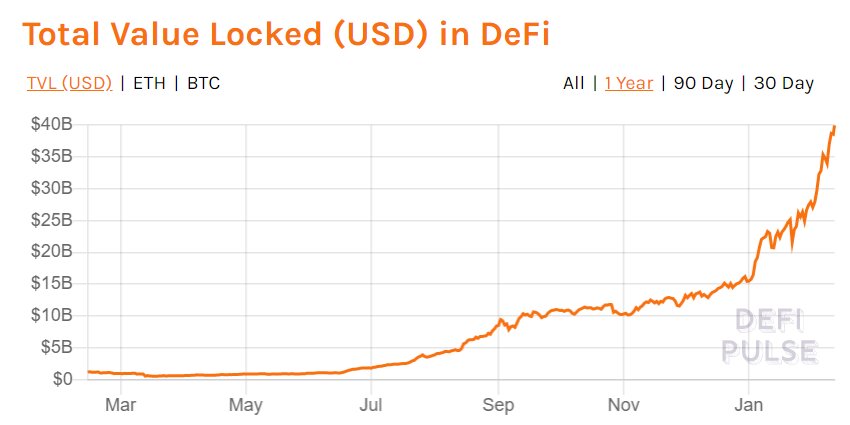 However, the rapid growth of DeFi has clearly demonstrated the problems that the Ethereum network has – insufficient bandwidth and high fees. This has led to the emergence of other blockchain smart contract platforms on the market, ready to compete with ETH.

However, Polkadot is most often called, which also works on the Proof-of-Stake algorithm and provides interaction between different blockchains. This project is often called the “Ethereum killer”, but many consider this statement controversial: both projects are at different stages of development, so it is very difficult to compare their real capabilities.

Nevertheless, Polkadot is attracting high interest from investors – in the period from mid-December to early February, the value of its DOT token quadrupled. In terms of its capitalization, it confidently entrenched itself in the five largest cryptocurrencies in the world.
Other projects that could affect Ethereum’s monopoly position in the smart contract industry include Cardano, Chainlink, and Near Protocol.

At the moment, it would be more correct to say that ETH is DeFi. And it’s not just about the level of activity within the network, but also about innovation, research and, of course, the community. First, something happens in Ethereum, and only then it is copied to other blockchains. Therefore, only ETH 2.0 can become the only killer of ETH now.

Bitcoin Price Analysis: What Are The Goals Of Bull Run?