What Does Ethereum Need To Dominate On Cryptocurrency Market

How long will Bitcoin remain the first cryptocurrency and is there at least one bidder on the cryptocurrency market to take its place? The developers and supporters of Ethereum are sure that it is the brainchild of Vitalik Buterin who can make a revolution.

Let’s look at the decentralized finance market, which should become like ICO, which again will bring great popularity to ETH

The latest industry news is incredibly bullish. The major crypto exchange Coinbase has published a list of tokens that the trading platform would support in the future:

Coinbase is exploring the addition of 18 new digital assets, some are live, some are not. We will evaluate each against our Digital Asset Framework. It’s our goal to offer support for all assets that meet our standards and are compliant with local law. https://t.co/IN4g4WfYjW

There are representatives of the DeFi sector, for example, Bancor and Compound.

The listing news on Coinbase can increase the price of the token from 10% to 40% within 24 hours.

Let’s look at the total capitalization of DeFi tokens. 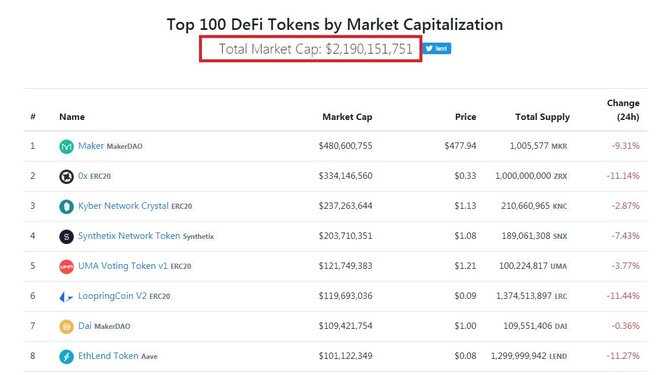 Therefore, it is not surprising that leading developers such as ConsenSys became interested in the niche.

The next news is the exponential growth of the new number of assets in the DeFi system:

Although this news is not worth much to rejoice. The ICO boom, which crashed by analogy with the dotcoms, was also called the reason for the broadcast to come first. We remember dotcoms, because, after this bubble burst, the best companies remained on the market.

The situation was similar to ICO, The best example of this is Binance Coin, which almost launched the TOP-1 crypto exchange.

Can a DeFi sphere be promising and help Ethereum grow? The answer to this question is yes. But the DeFi market may face similar problems. And this is unlikely to be avoided.

The main bet of Vitalik Buterin and the team is the transition to POS, in other words, the launch of the Ethereum 2.0 platform.

However, the key update of the Berlin network, without which it is impossible to go to the zero phase, which has already been postponed to autumn.

But the problem with supporting multiple clients on the same network at once seemed to be finally solved. At least the developers from Prysmatic Labs said that their new Ethereum 2.0 test network called Onyx has every chance of becoming final:

Most believe that Buterin will be able to solve all the technical issues, and we will see Ethereum version 2.0 sooner or later. This is evidenced by the graph of the growth in the number of wallets with a balance of 32 ethers – just such a threshold is needed to participate in staking after switching to the POS algorithm:

And one more study, which should show the faith of investors in the project. 80% of owners of the ether at the current price level are in the black:

Now we can see some optimism about the future forecast of the price of Ether in the short term. An updated ETH will help pump its rate more. But for its price to grow and be independent of Bitcoin, it is necessary that the fully completed Ethereum 2.0 becomes the very world computer that Vitalik Buterin promised us. We will be glad if this happens, but there will certainly be many obstacles to this goal, consider this when making your own investment decisions.

Arthur Hayes To Pay Out $ 44 Mln To BitMEX Early Investors