Ethereum remains the TOP-2 cryptocurrency in terms of capitalization and the TOP-1 in the development of DeFi projects. Despite the lucrative offers on Binance Smart Chain, developers choose Ethereum for leading projects, and users appreciate it. According to statistics, it is DeFi on Ethereum that continues to develop when Binance and other sites record a drop in demand.

Cosmos is a unique cryptocurrency on the basis of which Internet blockchains are created. The price shows the chance to become the new dark horse of the entire cryptocurrency market if Bitcoin supports the market.

SHIBA INU continues to lose value, why is this happening and what to do?

How many people do you think are already using DeFi apps? According to Dune Analytics, there are 3 million active addresses on the Ethereum blockchain that interact with leading DeFi projects. At the same time, even with a fall in the cryptocurrency market, the number of users is still growing exponentially.

And according to data from research firm IntoTheBlock, the amount of Ethereum blocked in the decentralized finance sector has shown a rapid recovery after a decline in June and today again exceeds 9 million coins.

Why is it important? In 2017 and the first half of 2018, there was a boom in ICO projects on the crypto market, everyone was collecting money for everything, 95% if not more of these token sales simply did not make any sense or were fraudulent by default. And when the direction of decentralized finance began to actively develop, a similar fate was predicted for him. When the first serious correction in the cryptocurrency market instantly nullifies interest in a new direction and projects begin to close.

Today we see that despite the lull, interest in DeFi sector persists and continues to grow. Of course, there were certain problems due to the fall of bitcoin, which cooled the ardor of many for any cryptocurrency. This can be clearly seen from the Google Trends chart, the hype is going through:

But the number of users, on the contrary, is growing, which means that those who have already started using decentralized finance continue to do so. And the growth of the user base is happening right now on Ethereum, where such original projects as Uniswap, Compound, Maker, Balancer, and others have been launched.

The fact that users understand where the original application is and where its clone is, according to a study by Messari analysts. They found that due to the fall in the crypto market and, as a result, the decrease in activity in the DeFi sector, the Binance Smart Chain ecosystem suffered the most, but the applications based on Ethereum, on the contrary, were the winner.

The most popular direction was chosen as an indicator – decentralized cryptocurrency exchanges. In May, the total trading volume on such sites exceeded $ 200 billion. But in June, it almost halved, amounting to only $ 95 billion. Moreover, there was a change of leader in the ranking of the DEX exchange, Uniswap on the Ethereum blockchain returned to the market leader.

In TOP-5 of the rating of trading platforms, there are two Uniswap at once – this is the same exchange, only different versions of the protocol, and both of them are now showing a significant increase in trading volume. But the main decentralized exchange in the Binance Smart Chain, PancakeSwap, on the contrary, is going through hard times, although until recently it was in the first place. And in the near future, the gap between Uniswap and competitors will increase, because just the other day, the exchange connected the first of two planned second-tier solutions for fast and cheap transactions Optimism.

💜 We are thrilled to announce the Alpha launch of Uniswap v3 on Optimistic Ethereum (OΞ) mainnet in partnership w/ @OptimismPBC!

🌐 This is a critical step in scaling DeFi applications and delivering user experience that rivals traditional web apps.https://t.co/Of3QmubFth

To date, Uniswap has over two million users, but with such updates, they will continue to arrive.

It is also worth mentioning separately about the Polygon network, which also acts as a second level solution for Ethereum. According to DappRadar, it is not inferior to user activity on the Ethereum blockchain, and given the speed of development, it will soon be able to compete with Binance Smart Chain.

From all of the above, it becomes clear how important and promising Ethereum ecosystem is. The success lies in the fact that this is where the best protocols for decentralized finance first emerge.

What is Apple’s main source of income? You should know that selling iPhone is cool, but the company’s main stake right now is on the app store and subscription services. That is, they not only sell you their smartphones, but then make you pay for their use. And this model really works, but now imagine that instead of an app store, you have a blockchain store, each of which offers unique opportunities.

Cosmos project follows this path, the developers of which released Tendermint engine and now, with its help, third-party developers launch their own networks and then combine them into one ecosystem. Today there are more than 248 projects, many of which are separate blockchains, among which there are very famous projects such as Binance Smart Chain.

Interestingly, the Cosmos developers have decided not to stop there and now their plans include integration on their own base with other blockchains that are not included in the development based on Tendermint. The project is called Emeris and this is a very ambitious task, as the developers themselves say, the project will offer end users a single portal for navigating the Internet of blockchains.

That is, Ethereum-based DeFi will be available in the new blockchain application store – this is the number one goal. And then there is access to other sites.

The first bridge between Cosmos and Ethereum will be built on the basis of the Gravity decentralized exchange. Thus, all tokens on the Ethereum blockchain, as well as in the Cosmos ecosystem, will be available for exchange. This is more than convenient and opens up new opportunities for arbitrage trading, that is, making money on the difference in rates on different platforms.

On the news about the development of a bridge with Ethereum, the Cosmos price was actively recovering faster than the market, and did not repeat all the movements for Bitcoin, as the rest of the altcoins did: 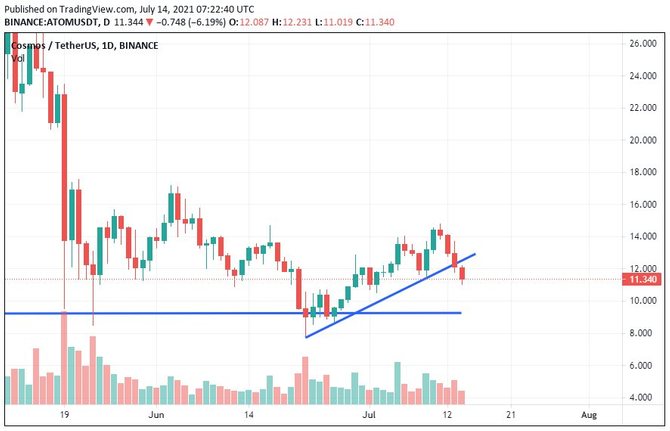 But general fears still took up, so now we are seeing a decline. This is not financial advice, but the level of technology and market reaction indicate that with a global turnaround in Bitcoin, Cosmos may be among the leaders in growth and at least the project is worthy to reach the top twenty cryptocurrencies.

Earlier we said that there is a risk of a decline in the price of Shiba INU in the short term. Let’s take a look at the rate today, despite the launch of the ShibaSwap exchange, we did not see any steep growth: 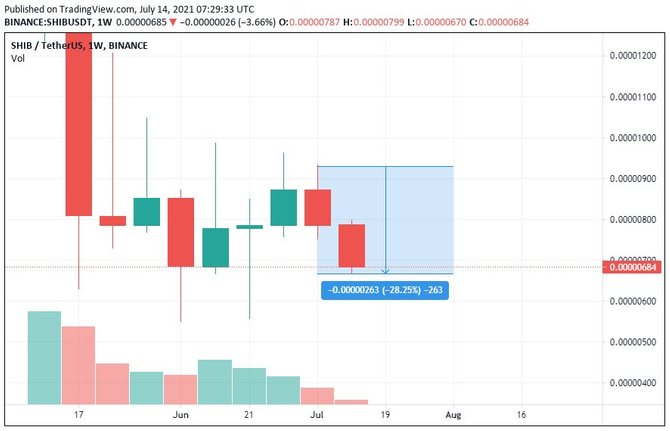 Instead, the coin lost 28% from the previous peak. On the daily chart, we also see a decline and the intention to test the support level again for strength: 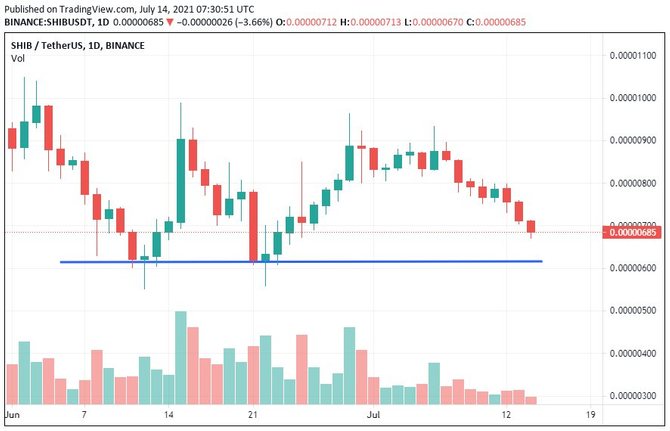 There is no point in waiting for new records from Shiba INU. It doesn’t work that easily, look at the top coins that are getting cheaper now. Or Dogecoin, which did not react at all to the last mention by Elon Musk.

@28delayslater challenge: see how many dogs you can get on screen!

Everyone chooses which coins and for how long to buy. But always conduct the most thorough analysis and look not only at a specific cryptocurrency, but also at the general trend of the Bitcoin market.