Most of the rules followed by popular blockchain projects involve trade-offs when it comes to decentralization. In return, participants receive more customized and utilitarian solutions.

Decentralization is a key feature of cryptocurrencies. The absence of a regulator or “node” that makes decisions on its own, in theory, makes it possible to build an alternative financial culture. This is a collective bargaining model – only a majority of voluntary network participants can confirm a transaction. The state, that is, the issuer, the guarantor of the value and the body exercising supervision, are absent.

The code of a decentralized network has its own rules of the game. For example, the procedure for the issue and payment of rewards, the presence and frequency of halving, the size of the block, etc. are fixed. If for some reason these conditions change, then a hard fork takes place.

According to Buterin, a decentralized network has three advantages. First, it is fault-tolerant, since failure of all numerous components is unlikely. Secondly, the resistance to attacks, given their high cost and complexity, is more effective. In addition, the decentralized network is more successful in resisting collusion: it is difficult to “make” the network work for the minority.

To get rid of a single “trusted person”, to one degree or another, is possible due to the blockchain architecture. However, the application of the technology itself does not guarantee a high degree of decentralization.

The measure of the “independence” of a token is determined by the specifics of the source code, private rules of issue and circulation, the scheme for reaching consensus, the rights and capabilities of network participants, and so on. In practice, a number of claims can be made against most cryptocurrencies.

Each Token Is “Decentralized” In Its Own Way

Bitcoin is the first cryptocurrency and the first example of using blockchain technology that positions itself as a benchmark for decentralization. There is no main node in the network, no organization or individual controls the operation of the system and the emission of tokens. The basic principles of operation are fixed in the source code. Anyone can create a node.

However, questions also arise about the format of the decentralization of the bitcoin network. First of all, more than half of the hash rate over the past year has been concentrated in the hands of a few companies with Chinese roots. At the moment, the mining market is oligopolistic. This potentially opens the door for collusion and a 51% attack on the network.

Anyone can really create a node. However, with the current level of network complexity, hardware is needed powerful enough to compete for new tokens. This creates a barrier to market entry.

In addition, it is believed that the developers of the Bitcoin Core client have a centralized influence on the network. Nikita Zhavoronkov, the founder of the blockchain columnist Blockchair, writes about this, in particular. In addition, in his presentation against the Taproot update, he argues that the developers are promoting this innovation for their own benefit.

My report on the negative impact of Taproot on Bitcoin’s privacy. PDF: https://t.co/5LK1QZSUzO

Please help to spread the message to miners. My DM’s are open for questions. (1/35) pic.twitter.com/zJV3PRZGUJ

The decentralized bitcoin network has another flaw. In the process of maintaining it, users are faced with functional limitations. The processing speed of transactions is not high enough to solve large problems of the real economy. At the same time, the commissions are high enough to encourage network members to support its work.

Consensus in Ethereum network is based on Proof-of-Work algorithm. Similar to Bitcoin, multiple pools control over 50% of the network hashrate.

New version of ETH 2.0 network offers a solution to this problem with Proof-of-Stake algorithm. It implies that those who own more coins get more voting weight.

According to the Blockchair website, 72 million ETH were distributed with a zero block, as of the end of September – 60% of the current circulation (118 million tokens). Consequently, the remaining 40% were mined in the mining process over the entire existence of the network. According to Coinmetrics, the amount of daily income of miners since the launch of Ethereum is just about 46 million tokens.

It turns out that the developers at the start received one and a half times more tokens than was mined by all network participants in six years. By switching to PoS, developers will gain control over the network. 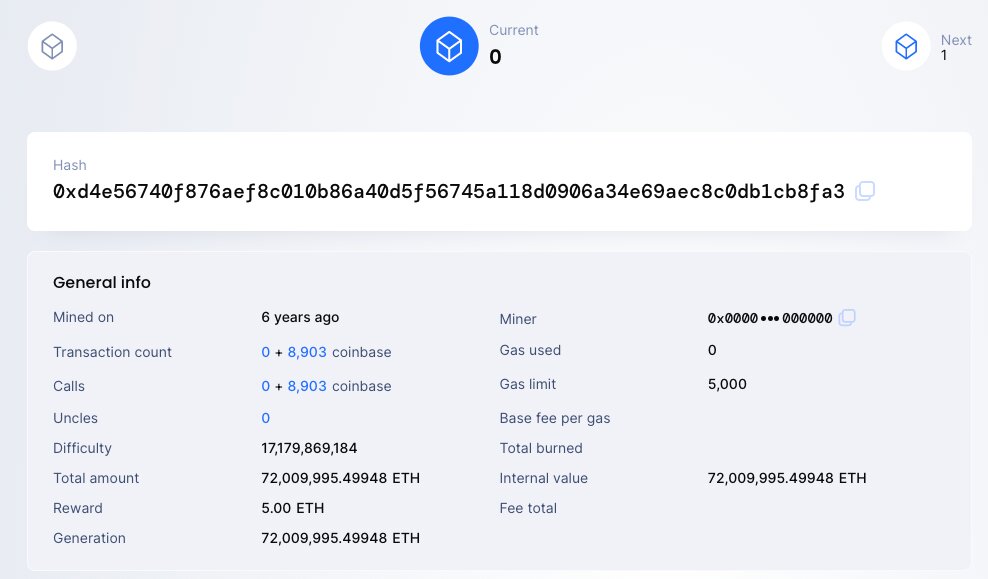 Data that more than 70 million tokens were distributed with the first block in Ethereum network is also available on Coinmarketcap website. And despite the availability of information about the risk of reducing the decentralization of the network in the future, the second largest cryptocurrency by market cap is one of the most popular platforms for building Dapps. In particular, most of the projects in the growing DeFi market are based on the Ethereum blockchain. According to Defipulse the volume of blocked funds in protocols based on the second cryptocurrency is more than $ 100 billion at the end of October.

Ripple’s token is significantly different from Bitcoin and Ethereum. First of all, it cannot be mined. The entire cryptocurrency was issued at the time the network was created. At the moment, some are in circulation, and some are blocked in the Ripple Lab.

Transactions are not confirmed by Proof-of-Work or Proof-of-Stake algorithms, but by a consensus mechanism developed by Ripple. The Unique Node List (UNL) contains a list of trusted nodes in XRP network. They all exchange data, agreeing on the current state of the register. As of October 13, there are 45 such validators on the list.

The blockchain idea described when Bitcoin was created is hardly applicable to XRP. Such important aspects of decentralization as the procedure for issuing tokens laid down in the code, the presence of mining as an economic incentive for network participants to maintain its operation, and a sufficiently large number of peer nodes are absent.

However, XRP consensus mechanism leads to less energy consumption of transactions and significantly increases the speed of the network. Due to the difference in technology and the centralization of the XRP Ledger network, the platform has a large throughput: processing 1,500 transactions per second instead of 10 like bitcoin. Average Network Fee Thousands Less: The average fee for 2021 in Bitcoin network exceeds XRP by almost 9,000 times, according to Coinmetrics data.

These parameters of the network’s functioning that make it a suitable analogue for cross-border bank transfers. In addition, these network features allow Ripple’s development and XRP token to be used in CBDC. The financial institution Banque de France is leaning towards the idea that the XRP Ledger infrastructure can form the basis for the digital euro.

Tether openly admits in its whitepaper that it is not a completely decentralized solution, as it has centralized storage of reserve assets.

Tether Ltd fully controls the issuance of the token. At the same time, he claims that he issues one USDT for each dollar that gets into the vault. In theory, this is exactly what the 1: 1 USDT / USD exchange rate provides. It is impossible to verify this based on the information contained in any of the blockchains that issue USDT. This raises the question of trust directly to Tether – a sign of a centralized market.

Similar reasoning holds true for the second most popular stablecoin, USD Coin. The emission scheme is not spelled out in the source code, but is controlled by the Center initiative (founders: Circle and Coinbase) depending on the demand for USDC.

The difference between stablecoins is that market participants trust USD Coin more than Tether. This is due to the frequency and transparency of the audit of reserves. However, this does not apply to the level of decentralization of the network. And the very need for audit suggests that the network does not provide the level of trust that is inherent in decentralized structures.

However, stablecoins play an important role in mitigating the risks of cryptocurrency volatility in investor portfolios. Nearly two-thirds of bitcoin trades were paired with USDT in the third quarter of 2021, according to CryptoCompare. In addition, over the year, the capitalization of this token has grown more than four times, and the capitalization of USDC has grown almost 12 times. This indirectly indicates the presence of high demand for stablecoins from market participants, despite claims to decentralization.

Is Centralized Infrastructure Good or Bad?

Among the infrastructure players of the market, quite centralized wallets, exchanges, custodians, etc. are most often found. On the one hand, they provide a convenient and functional interface and offer demanded services. On the other hand, they can threaten the principles of the distributed network and its assets.

First of all, the safety of user funds and data directly depends on the security systems of a particular company. Classic centralized cryptocurrency exchanges are susceptible to hacker attacks. Even the big players have vulnerabilities from time to time. For example, in early October, attackers gained access to the accounts of 6,000 Coinbase customers.

For example, there are a number of key differences between DEX and centralized exchanges. First, users store cryptocurrencies in their wallets when trading and are responsible for their security on their own. DEX does not require user verification, that is, the anonymity of the process is preserved. Additional services such as margin trading and stop-loss are often not available.

The decentralized exchange enables trading via smart contracts. This means that each of them is mainly based on one blockchain, for example, Ethereum or Binance Smart Chain. Accordingly, trading within one DEX is possible only with those tokens that are issued on a specific blockchain. This feature of decentralized exchanges reduces the number of available trading pairs.

Limited functionality, fewer trading pairs, and the need to take responsibility for the safety of your own funds lead to the fact that centralized exchanges generate many times more liquidity. DEX trading volume in October was $ 116 billion, according to Dune Analytics. At the same time, trading on centralized exchanges totaled $ 1.25 trillion over the same period, according to The Block. These numbers indicate that users are opting for centralized counterparts despite having distributed options.

The community never tires of arguing about how important the degree of decentralization is, both for the token itself and for the accompanying infrastructure. In addition to ideological aspects, as a rule, we are talking about the risks of manipulating the exchange rate and the security of user data. The potential benefits of reducing energy costs and increasing network speed are not taken into account by all market participants. Finally, it is still unclear to what extent “independent” assets will be able to coexist with traditional instruments and their tight regulatory frameworks.

How To Collect Crypto Portfolio Like Elon Musk: What Coins Does Billionaire Invest In