Cryptocurrency Market Forecast: What Is Waiting For BTC, ETH And ADA

Bitcoin breaks through $ 50,000 again. Altcoins are growing faster than Bitcoin, and this is a risk. However, news suggests that the current movement may continue. We will discuss what events are helping the cryptocurrency market continue to grow in September in this article.

It’s still very nice to see Bitcoin at $ 50,000 again. We marked the 200-day moving average on the chart which acted as support, and also indicated the previous uptrend, which Bitcoin did not hold, after the first time this summer: 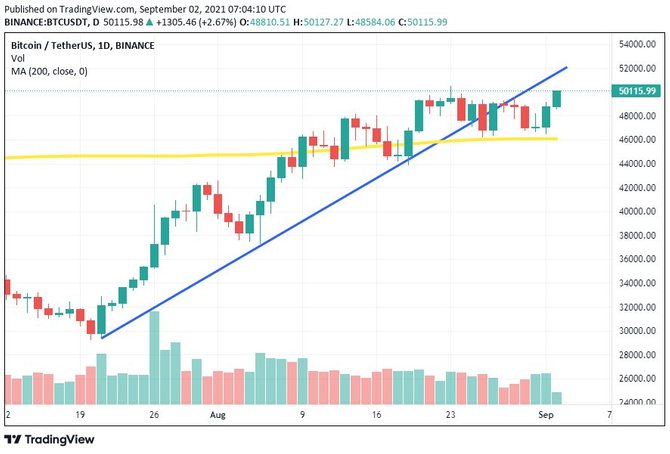 We showed the trend line, since it once already acted as a resistance and bitcoin fell from it to almost $ 46,000. Now it is going higher, but it could not lose its properties, on the other hand, the resistance level is also a target for bitcoin … Therefore, the continuation of the current impulse may lead the price to $ 51,500.

PlanB analyst pointed out that the August close above $ 47,000 fully confirms his Stock-to-Flow model, so we are still on the right track to the $ 100,000 price:

And Willy Woo is confident that Bitcoin has reached the second zone of price stability and as soon as it exceeds $ 50,000, it can very quickly grow to $ 60,000, because there are practically no significant obstacles there.

However, there is also a negative outlook for Bitcoin. The coin can drop lower again if you are very unlucky, and here on this chart we showed the moments that cause alarm: 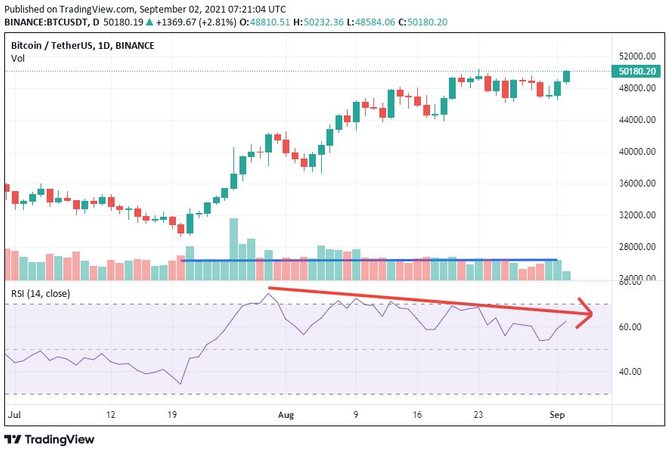 The momentum of BTC price was quite strong, but the trading volumes remained modest, that is, there are much fewer buyers on the market than we would like. And the relative strength index on the daily timeframe is in a downtrend, this is another sign of the bulls’ weakness. That is, they now control the market, but they can quickly surrender.

We would also like to draw your attention to the fact that from about August 7, Bitcoin went into correction every time the RSI reached the overbought zone at four hours, and now we have reached it again: 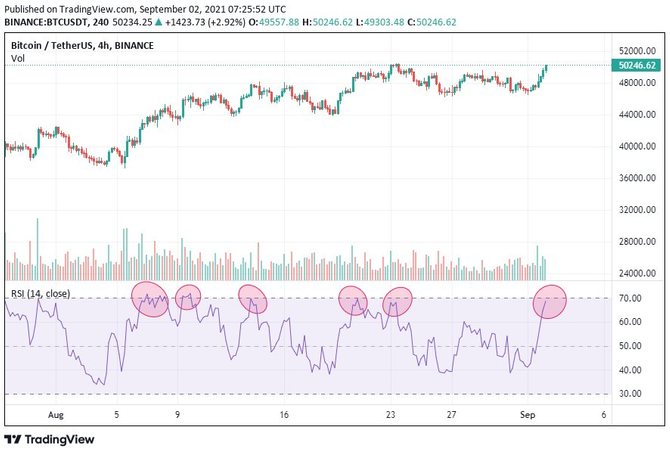 It was Ethereum that started growth yesterday, Bitcoin joined in the process. At the moment, the price exceeded $ 3,800, after which it retraced somewhat, and interestingly, from the line of the previous trend. 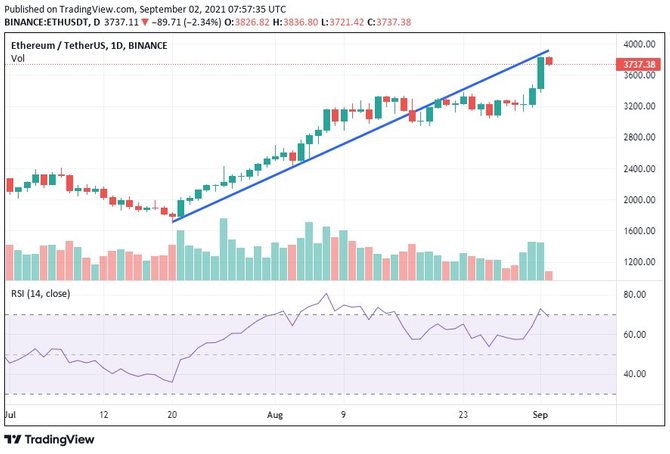 This is the scenario that has been hinted at for bitcoin as well, let’s see if it works out. RSI also looks overbought, but after such a 21% impulse, this is normal. Also, the trading volumes showed an increase, which is another plus sign due to the upward movement.

Cardano finally breaks out the level of $ 3: 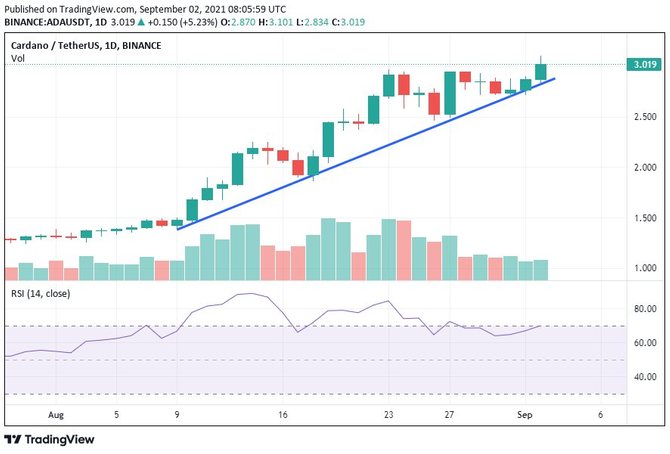 We can see that ADA keeps the trend well, so we can make plans for continued growth, the targets I mentioned earlier are $ 3.5 and then $ 4. This is something that is modest and for the near future. Trading volumes are sagging and the RSI peaks are lower and lower, there is a direct resemblance to Bitcoin.

But the first cryptocurrency has so far maintained such growth, although it looks weak, why shouldn’t Cardano do the same? In addition, we can start the countdown on Cardano, because there are exactly 10 days left before the Alonzo update, which will add smart contracts, and so far, judging by the statements of the developers, it falls within the established time frame.

Yesterday, the market was tried to scare the FUD from Donald Trump, who said that you need to invest only in the dollar, because it is the American currency. But he does not trust cryptocurrencies, and it seems that he even turned to the finance minister while he was president, with a proposal to put an end to them, because he considers bitcoin a threat to the dollar.

However, they are unlikely to listen to Trump now, especially in El Salvador, where in five days Bitcoin will be on a par with the dollar. The authorities continue to implement their plan to adopt the first cryptocurrency at the state level. A $ 150 million fund has already been agreed, which will provide free conversion of Bitcoin to U.S. dollar and vice versa. Look at the reaction of the country’s parliament when they accepted everything.

Also, citizens will receive $ 30 in BTC , and 1,500 Bitcoin ATMs will be installed in the country so that everyone can convert money as it suits them. Yes, in El Salvador, not everyone is happy with bitcoin and there are protests in the country, but this is how they look from the air, draw your own conclusions.

The event itself will take place on September 7 and it can be a great impetus for the new growth of Bitcoin.

And one more extremely good news: yesterday Binance resumed accepting deposits through SWIFT payments, funds are accepted in dollars and credited to the balance in their BUSD stablecoin.

The exchange does not disclose a partner bank, but it definitely exists, and if banks return to cooperation with the platform. Therefore, their problems with regulators have finally begun to be settled.

Only 1% Of Smart Contracts Are Working Properly On Cardano Blockchain