Cryptocurrency Market Analisys: The market Is Preparing For Growth

According to the number of Google's requests the interest in Bitcoin fell to a minimum of two years. This is due to the continued decline in the market value of cryptocurrencies. However, from the point of view of technical analysis, the market is currently completing the correctional phase of decline and is preparing a growth wave.

On the 4-hour chart, we can see the correctional decline wave most likely ended, reaching the Fibonacci level of 61.8%. It is not necessary to exclude the possibility of the occurrence of the next short-term momentum of decline to the level of 76.0% ($ 3543) or to the medium-term support of $ 3463. 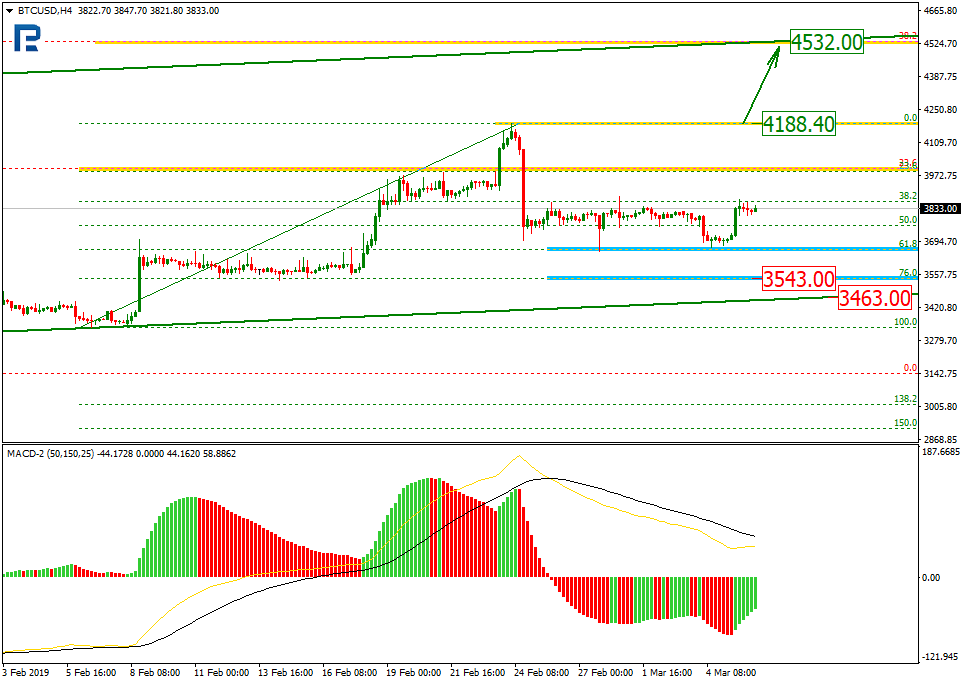 The downward line indicator MACD points out the possibility of reducing. The overall medium-term technical picture indicates the continuation of the development of the upward correction phase. In the short term, we can expect growth to the current peak of $ 4,188.40. After breaking through this level quotes can rise to the main resistance at $ 4,532.

On the hourly chart, we can see the Stochastic indicator approaching the overbought zone. Against this background, there is an acceleration of growth momentum and the achievement of a local resistance of $ 3909.

However, at the moment BTC/USD is in the local correction triangle after rapid growth. The main support is located on the bottom line of the short-term corridor - around $ 3,683. 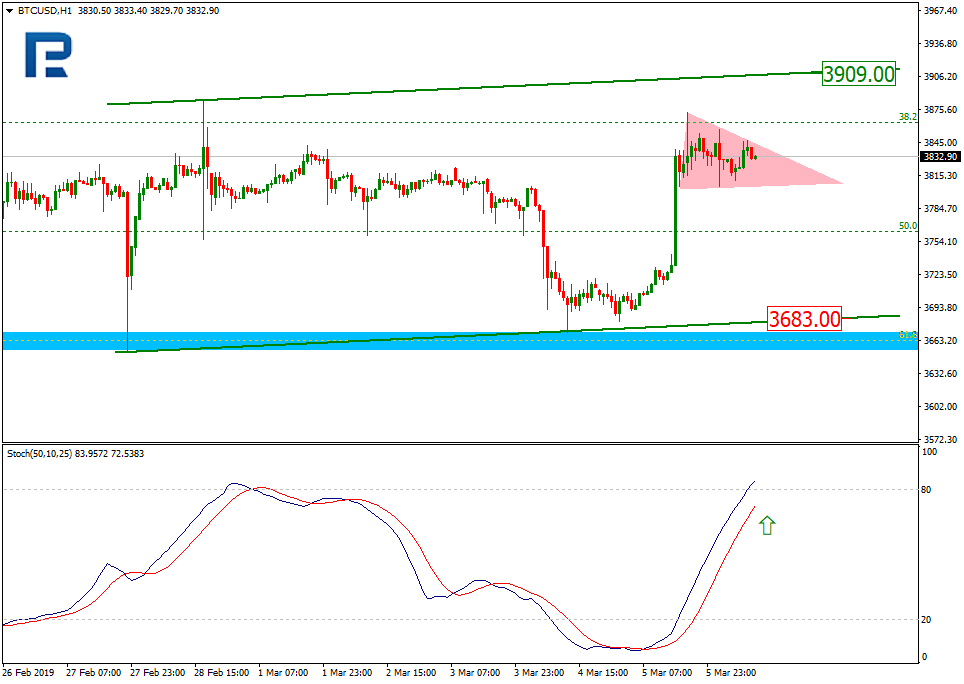 The EOS dynamics on the 4-hour chart demonstrates the completion of the correction phase by the breakdown of the local resistance line. Currently, EOS/USD is re-testing this line, which has already become a support level.

The immediate goal of growth will be the resistance line of the medium-term channel and the mark of $ 4.13. After reaching this level, we can expect a rebound from it and the next wave of decline. Downward MACD lines can serve as confirmation of the hypothesis of decline. 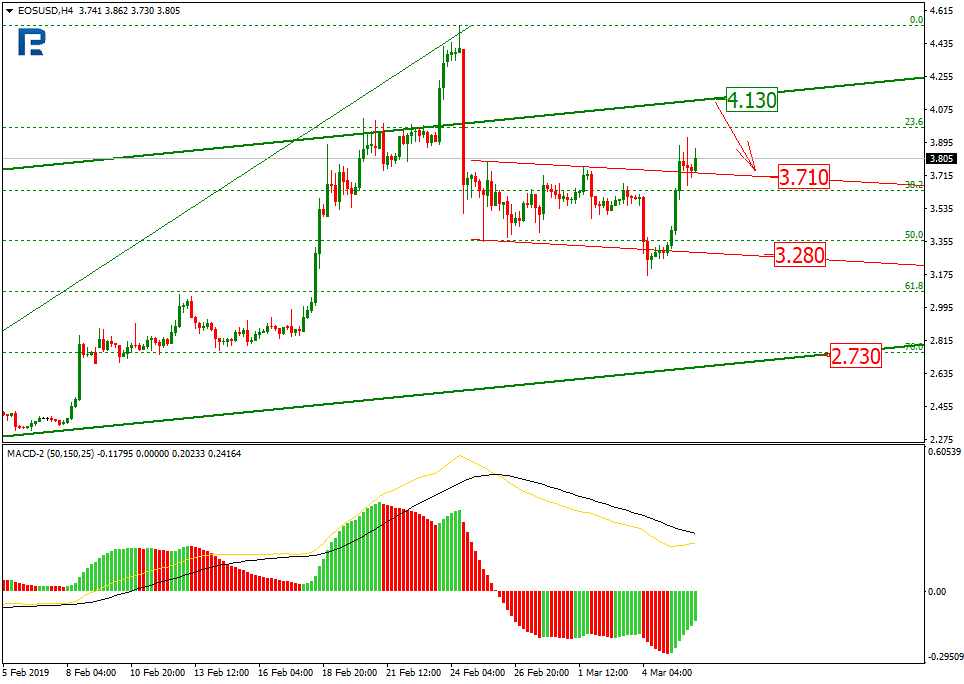 On the hourly chart, EOS forms a triangular correction corridor after a rapid growth impulse. At the same time, the Stochastic indicator enters the overbought zone. The correction triangle is between the support level of $ 3.66 and the resistance level of $ 3.92. 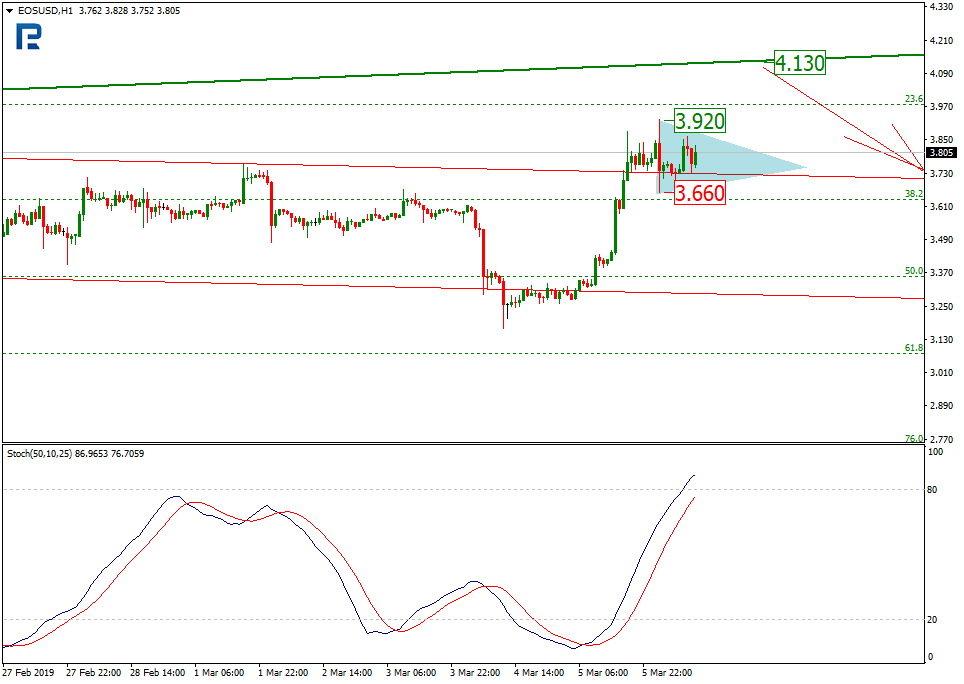 On the 4-hour chart, ETH/USD tests the resistance line. It should be noted that the decline wave corrected the previous growth trend by 61.8% on the Fibonacci scale, but if the local resistance line fails to test, the quotes will be sent to storm the local support $ 120.90, and later the main one - at the mark of $ 111.80.

The successful outcome of testing the local resistance line may open the way for the quotes upwards, creating a wave of growth. The immediate goal of the growth impulse will be the current maximum of $ 166.04. Break of the maximum will allow the market to test the medium-term resistance line at the level of $ 183.60. 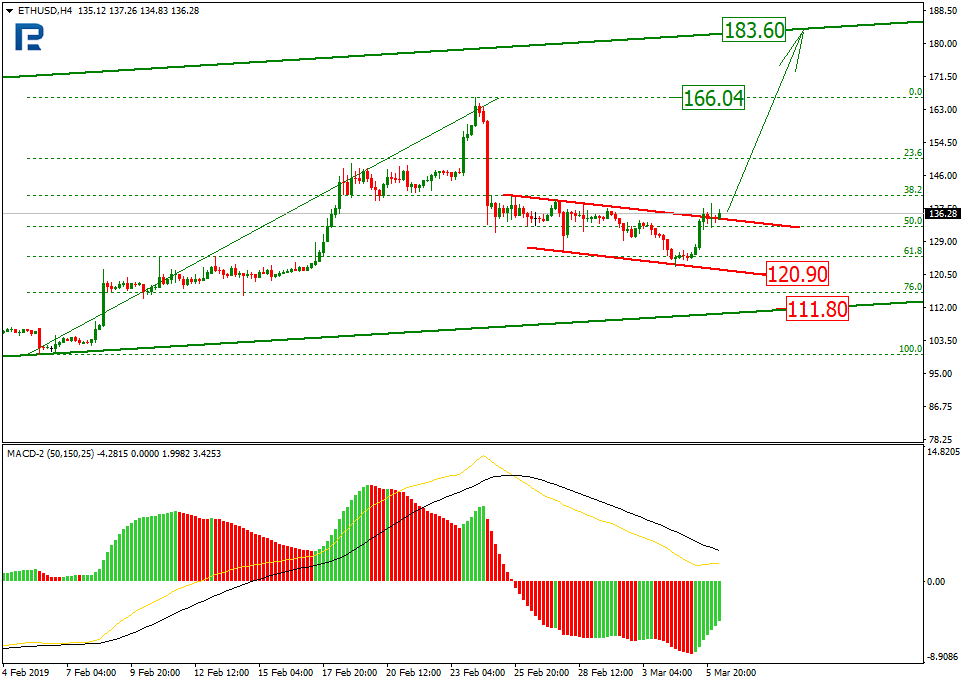 Considering the dynamics of Ethereum on the hourly chart, we observe the testing of the resistance line with the formation of a side effect as a correction after the growth impulse. The entry of the Stochastic indicator into the overbought zone may indicate the potential for the breakdown of the resistance level of $ 138.99 and a further rise to the projection resistance of $ 145.90. In turn, the breakdown of support for $ 132.61 will be a signal for the development of a downward impulse.

On the 4-hour chart, LTC demonstrates the development of the next wave of growth, testing the maximum and the resistance line of the medium-term channel. Such dynamics indicates a change in the rate of growth trend development.

The main goal of growth will be projection resistance of $ 58.55. The further rise of quotes is evidenced by the formation of the “golden cross” on MACD.

The current benchmark support level is $ 46.70. A break of this mark will open the way for a decline to the main medium-term support line at $ 40. 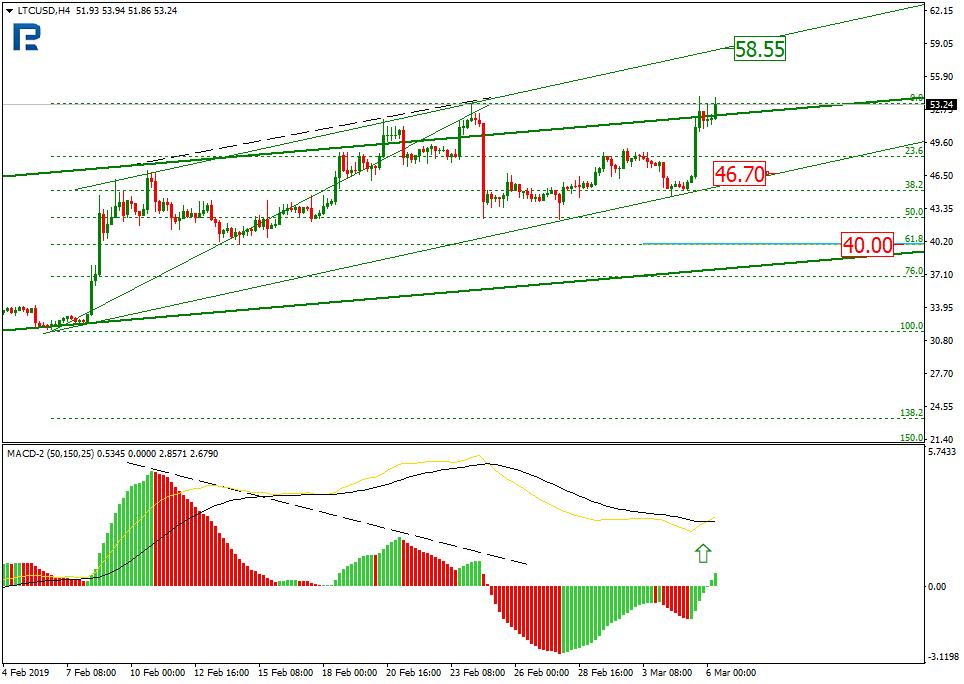 On the hourly chart, Litecoin entered the side when testing a significant resistance area. Observing the rise of the Stochastic indicator in the overbought zone, the breakout level of $ 53.98 is able to be and to allow the LTC/USD to rise to the main target - $ 58.55. In turn, the breakdown of support of $ 51 will be a signal to decline to the level of $ 46.70. 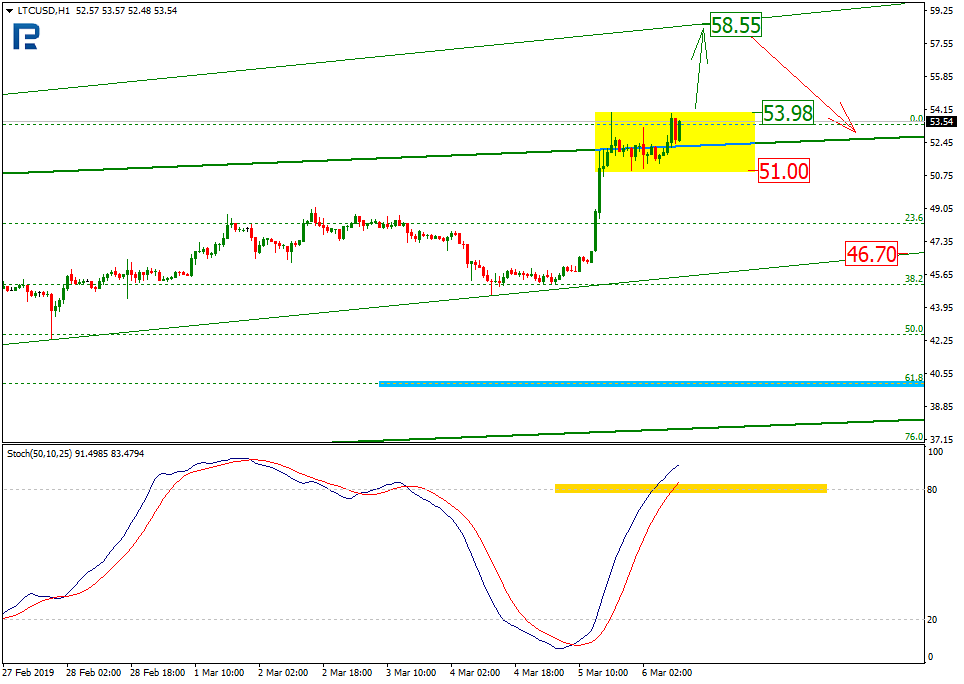 On the 4-hour XRP chart, we see that the market has tested the long-term resistance line and is developing an upward movement. It is also worth noting that the quotes have overcome the upper limit of the triangle, which may be the beginning of the development of a new growth impulse.

The immediate goal of growth will be a local resistance of $ 0.322. The main goal will be the resistance line of the medium-term growth channel - the mark of $ 0.354. If the market fails to overcome $ 0.322, then there may be a wave of decline in the breakdown of current support of $ 0.299 and the achievement of the mark of $ 0.271. The possibility of a decline scenario may be indicated by the directivity of the MACD lines. 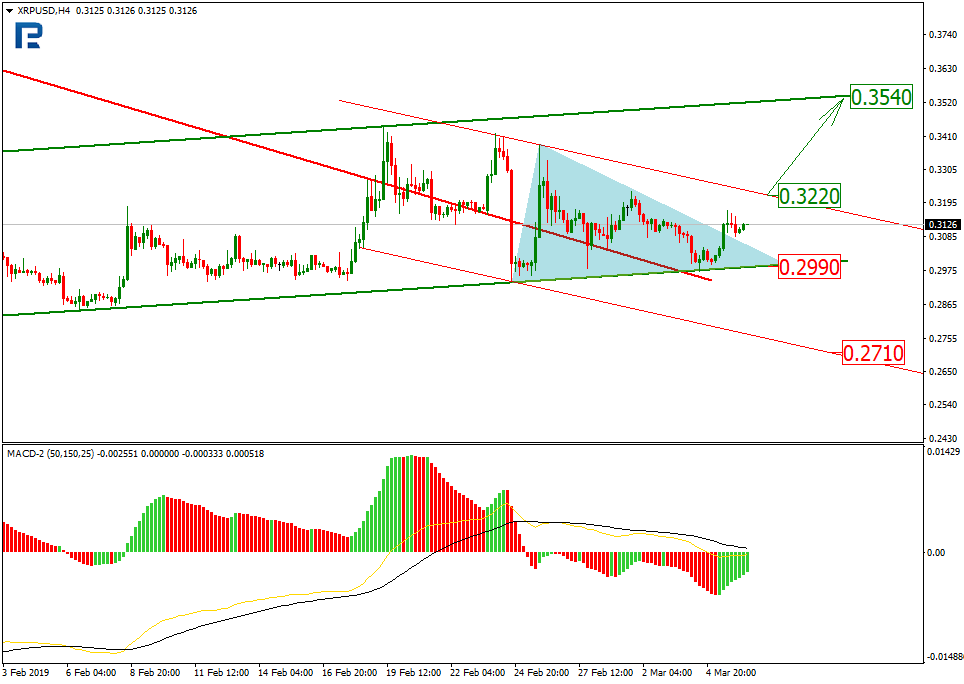