On the daily chart, BTC/USD was able to push off from the upper border of the Bollinger Bands, which indicates the continued pressure from the bears.

As the main trading idea, we can expect a decline in quotations to the level of support at $ 6800, and then begin to grow towards a potential target at $ 9800. An additional signal in favor of this option will be an uptrend test on the RSI indicator. 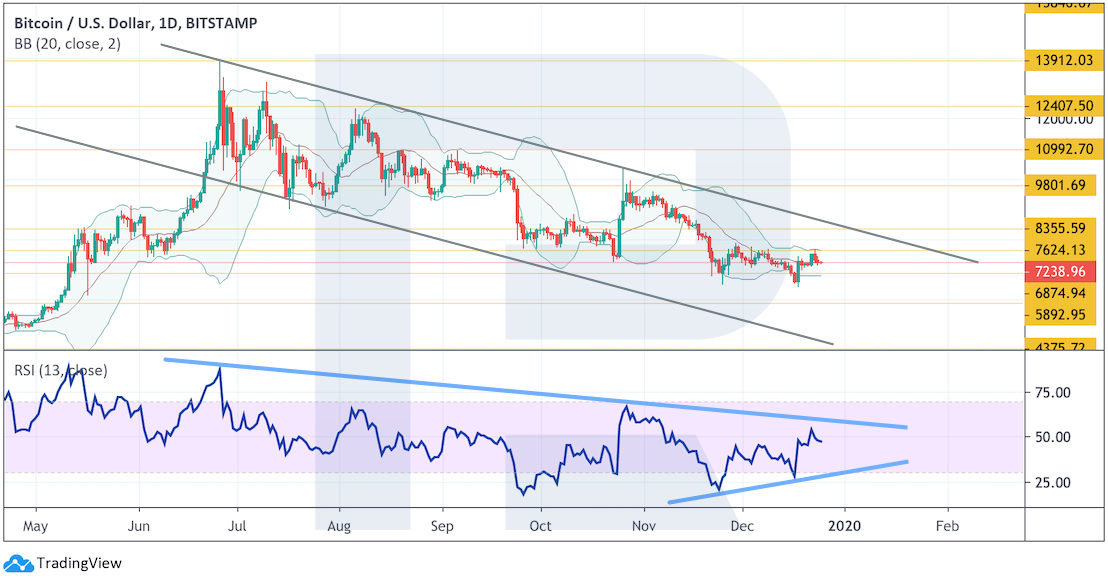 Cancellation of the option with a price increase will be a fall and a breakdown of the level of $ 6500, after which the fall can continue to the target at $ 4650. 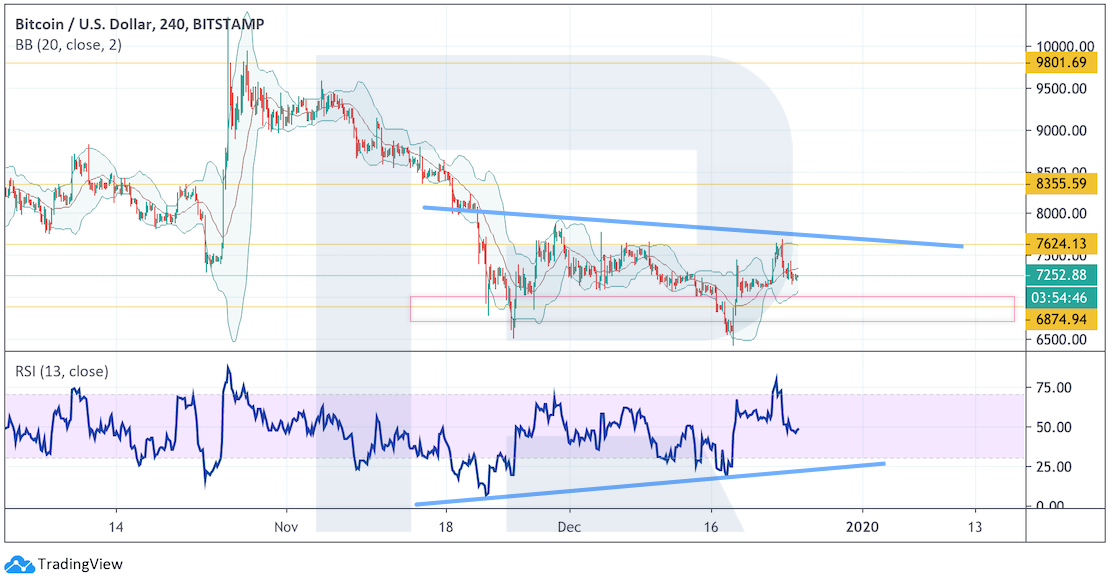 ETH/USD of the asset on the daily chart has not yet been able to leave the boundaries of the downward channel. The values ​​of the RSI indicator “cling” to the support line, while demonstrating a rebound. However, buyers do not have enough strength to gain a foothold over the moving averages, and they continue to indicate the presence of a downward trend.

As a medium-term trading idea, we should expect a test of the level of $ 100 and the beginning of the growth in the price of a digital asset. A confirmation of the development of the upward trend will be price fixing above the level of $ 157, which will indicate a way out of the downward channel. A breakdown of the $ 100 area may trigger a continued fall. 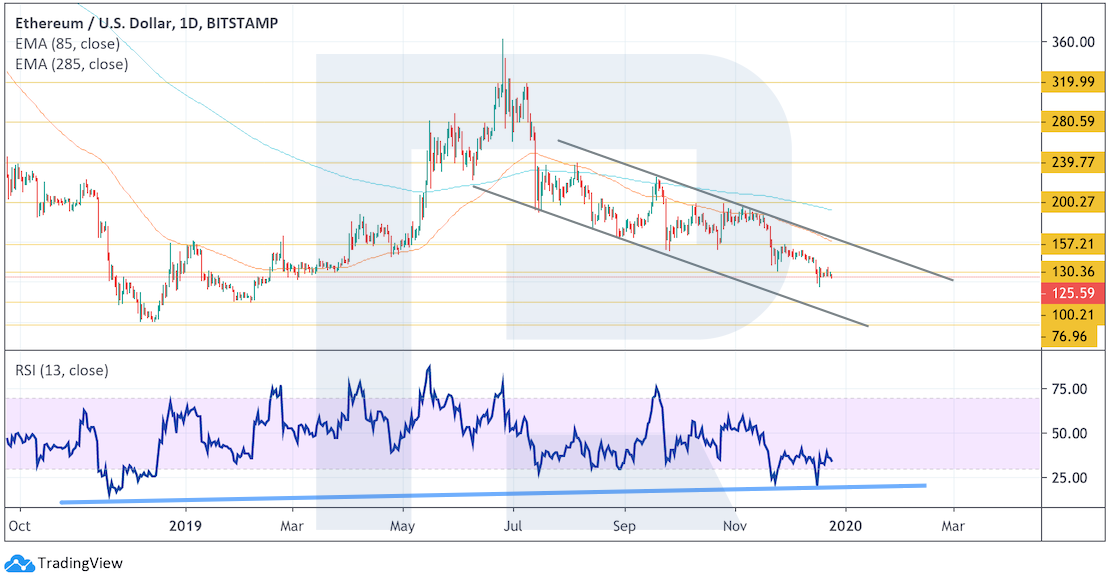 On a 4-hour chart, ETH/USD is clamped as part of the Wedge model. In most cases, such a model is considered a reversal, and confirmation for it will be a breakdown of the upper border of the pattern with price fixing above the level of $ 135. Only then can we expect the beginning of the growth in the value of the asset to a potential target at the level of $ 200.

Cancellation of this option may be a strong drop below the level of $ 100, which will indicate the abolition of the formation of the “wedge” and the continuation of the decline. 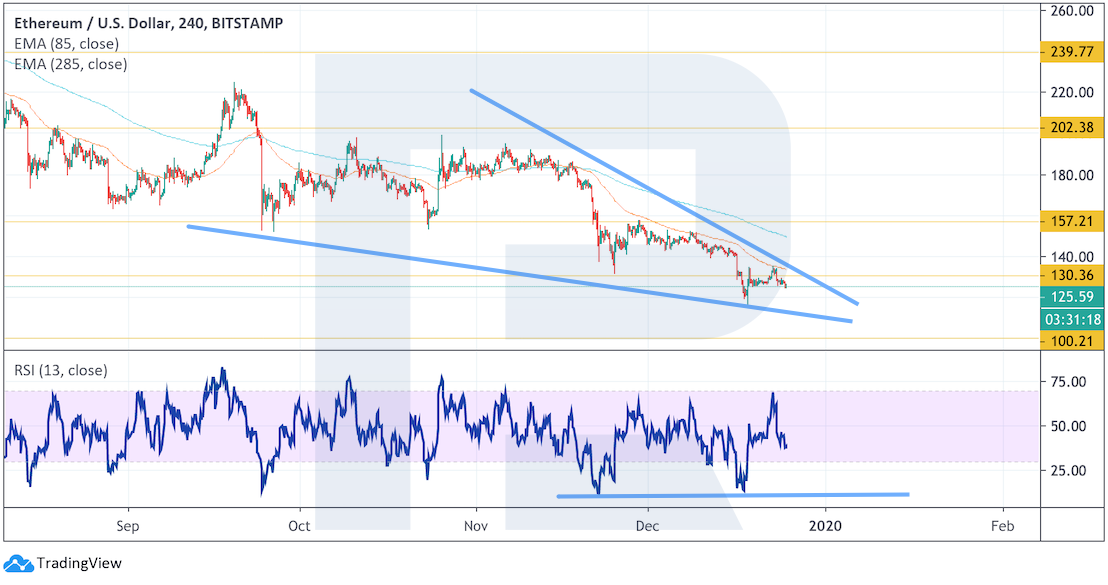 EOS/USD remains under the cloud of the Ichimoku Kinko Hyo indicator, which still indicates the presence of a bearish trend. After another test of the support line on the RSI indicator, the price pushed up, however, a breakdown of the upper border of the downward channel has not yet occurred. 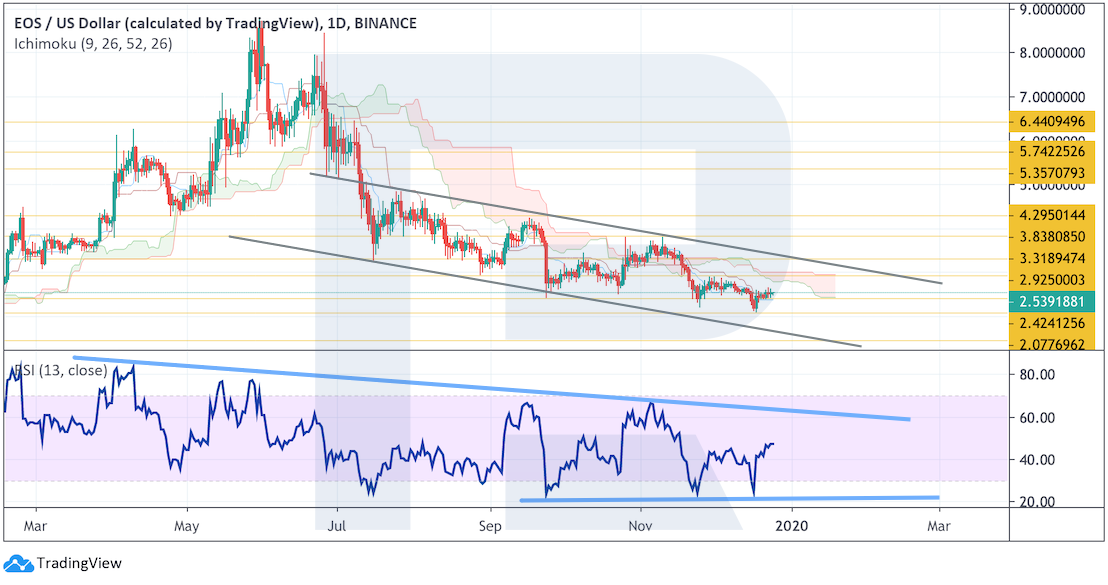 EOS/USD 4-hour chart looks more ready for growth. Here the formation of the bull model “Wolfe Wave” was completed. The purpose of the model is the area near the level of $ 3.30. At the same time, quotes are located above the upper border of the “cloud”, which indicates the preservation of the medium-term upward trend.

Cancellation of the option with a price increase will be a fall and a breakdown of the level of $ 2.07, which will indicate the resumption of a downward impulse and a continued decline. 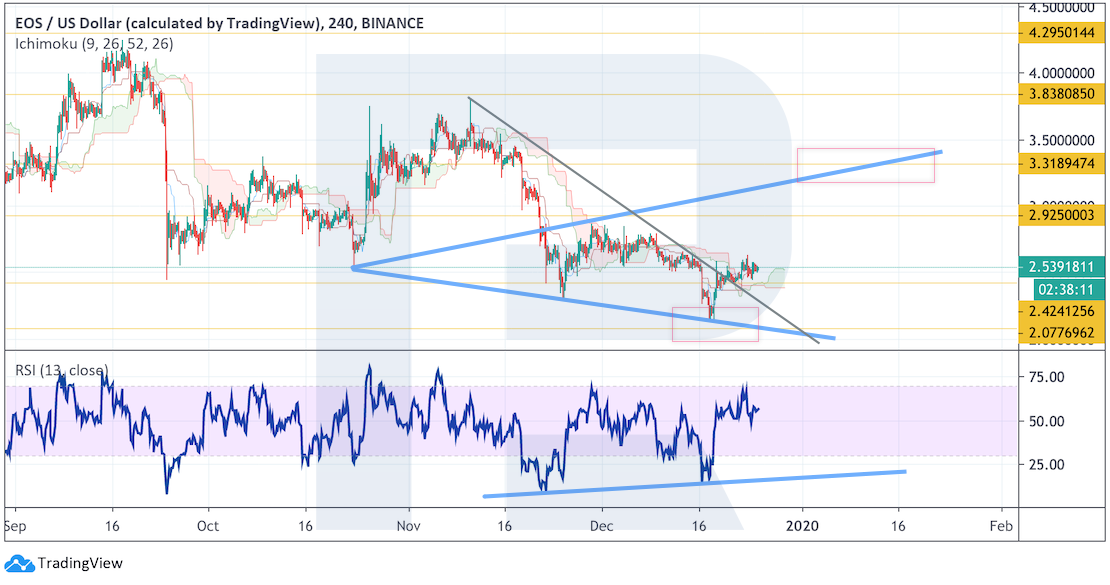 LTC/USD keeps declining on the daily chart, the downward momentum is quite strong. It’s worth talking about the beginning of a reversal only with price fixing above the level of $ 55, which will indicate that quotes will go beyond the downward channel.

As a short-term idea, one should not exclude attempts to test the level of $ 40 before the start of the price increase. A test of the support line on the RSI indicator, where quotes have already shown a rebound after previous tests, will also favor this option. 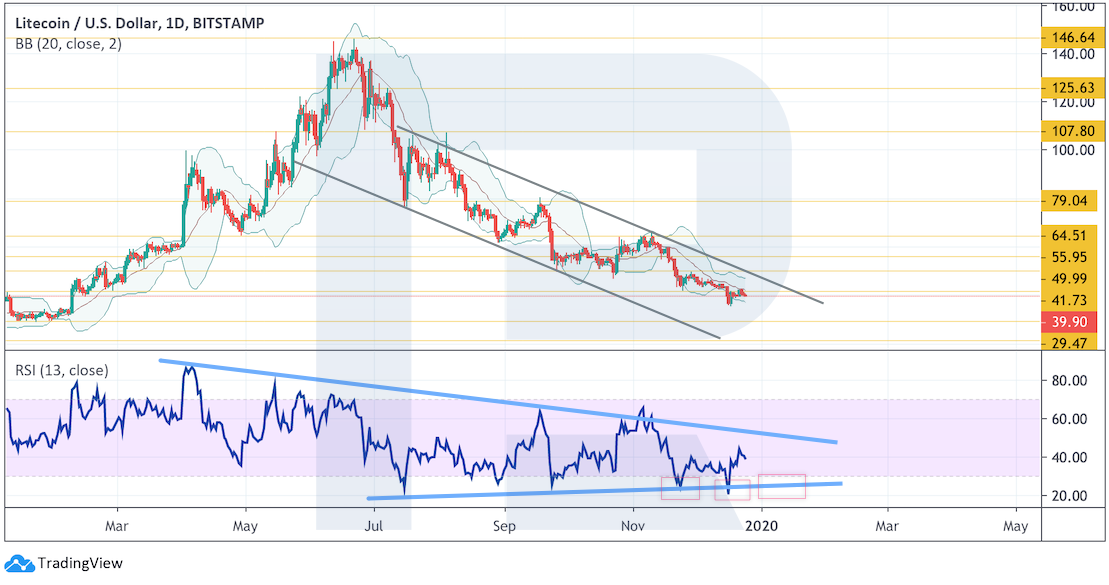 On a 4-hour chart, the price is clamped within the boundaries of the “Wedge” model. To start the growth, it is important to see a breakdown of the upper boundary of the model with fixing quotes above the level of $ 50. However, here it is not necessary to exclude the test of the lower boundary of the “wedge” before the start of growth.

An additional signal will be a rebound from the trend line on the RSI indicator. The cancellation of the indicated option with growth will be a decrease and a breakdown of the level of $ 40, which will indicate a fall below, to the level of $ 35. 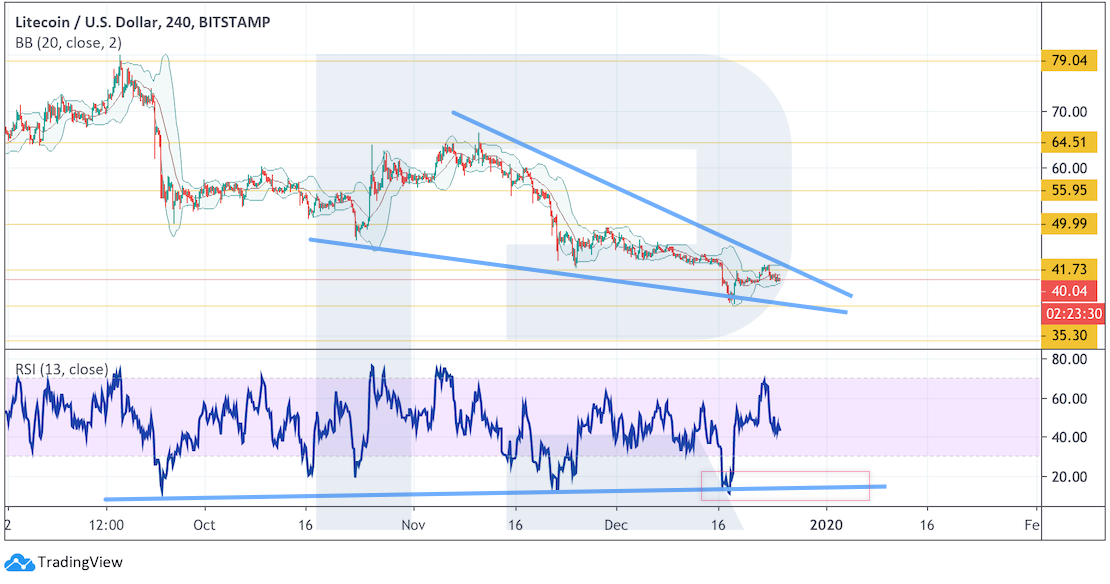 On the daily chart, the price continues to decline as part of the downward channel. The values ​​of the RSI indicator previously pushed off the trend line, however, the bulls did not have the strength to push the quotes out of the channel. Do not exclude another attempt to fall with the test level of $ 160, from which we can already expect the start of growth in value to the target at $ 265.

The cancellation of the option with the rise will be a breakdown of the support level and price fixing below the level of $ 150, at which we should expect a further decline. 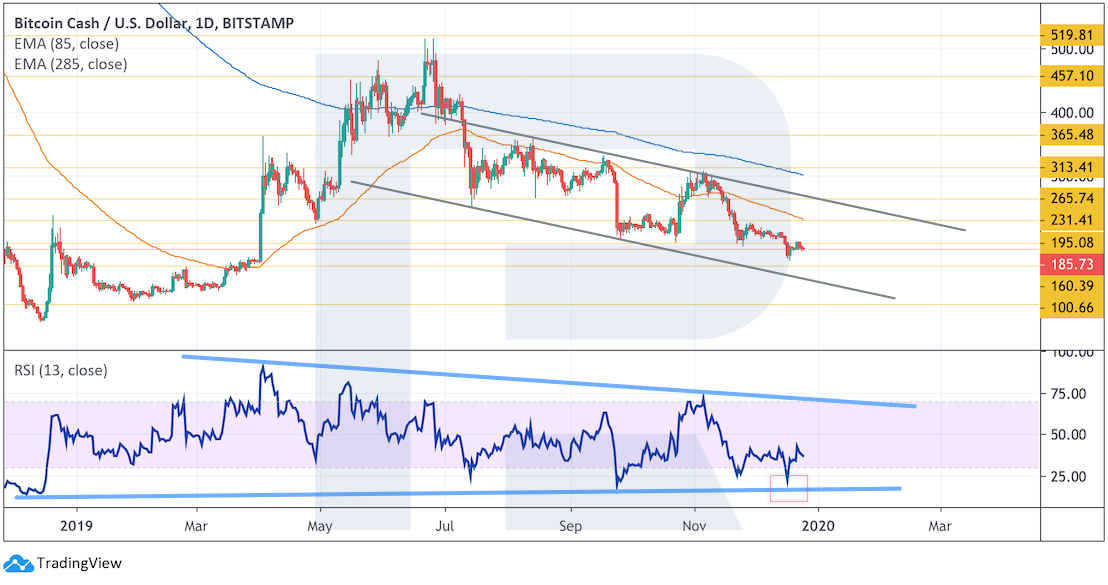 According to 1-hour chart the “Wedge” reversal pattern is formed. At the moment, we should also expect a test of the lower boundary of the model and the beginning of the rise in the value of the asset. A confirmation of the growth will be a breakdown of the upper border of the pattern and consolidation above the level of $ 195.

Cancellation of such a forecast will be a breakdown of the lower border, which will indicate a continuation of the fall below the level of $ 105. 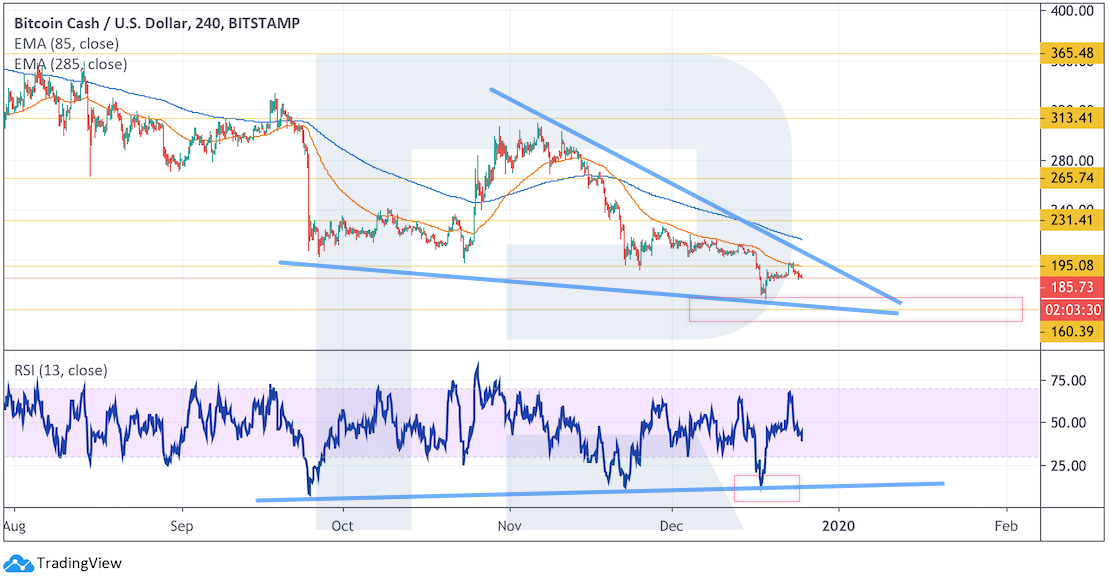 Bitcoin Price Analysis: Where Is The Next Bottom Of BTC?

Ethereum Price Analysis: How Will ETH/USD Change In The Long Term?

Ethereum Price Analysis: Is ETH/USD In The Consolidation Phase?