Cryptocurrency Market Analisys: Correction Before A New Wave Of Growth

The Bitcoin price failed to consolidate above long-term downstream channel. In the case of a successful breakdown it would be possible to see treasured test of the $ 20,000 area and the continuation of the bullish rally.

However, the potential for further growth remains – most likely, we are just seeing a correction before a new wave of growth in the cryptocurrency market. However, on small timeframes, the Bitcoin forms a reversal model, in case of successful completion of which we will soon see a breakdown of the next maximum and a continuation of the bullish trend.

EOS cryptocurrency looks rather weak in the current situation. A local minimum was broken here and the quotes left the channel limits, so the correction may be delayed.

Cryptocurrency went into correction, pushing off from the upper boundary of the downward channel. However, the potential for a new attempt at growth still remains. On the daily chart, the RSI indicator values ​​returned to the support line again. At the time of her test, you shouldn’t rule out another bounce and a rise in quotes.

The BTC/USD continues to move in the ascending channel. As the main trading idea, we can expect a test of the lower boundary of the ascending channel at the level of $ 11,275, then – continued growth. Confirmation will be the breakdown of the upper boundary of the channel and consolidation above the level of $ 15,000. In this case, we can safely talk about the new test of the $ 20,000 level and the full development of the bull trend. 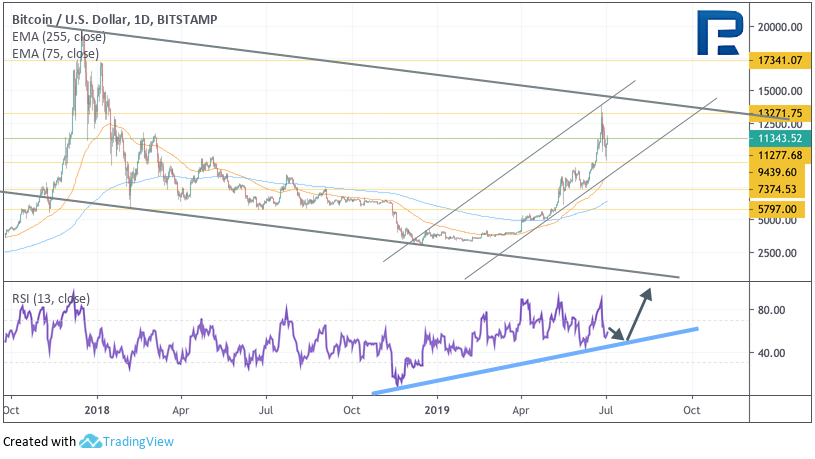 On the hourly chart there is a high probability of forming an inverted head and shoulders model. Within this model, we can talk about a fall to the level of $ 11,275, where the formation of the right “shoulder” of the figure is expected, followed by a rebound and a continued rise. In favor of this option will make the next test of the trend line on the RSI indicator. 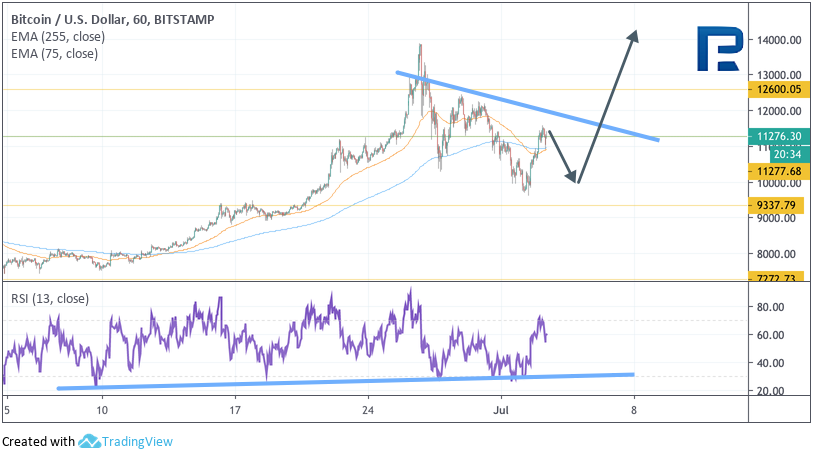 EOS could not hold above the cloud Ishimoku. At the moment, we can talk about a medium-term change in the trend in favor of a downtrend. Quotes also left the ascending channel.

As the main trading idea, we expect an upward correction and a test of the lower boundary of the indicator cloud at $ 6.70. Next – a rebound and the continuation of the fall with a potential goal of $ 4.58.

If sellers manage to consolidate lower, then we can talk about a decline to $ 3.13. The cancellation of the negative option will be a strong growth and consolidation above $ 7.20, which will indicate a breakdown of the upper boundary of the cloud and the return of the price to the bull trend. 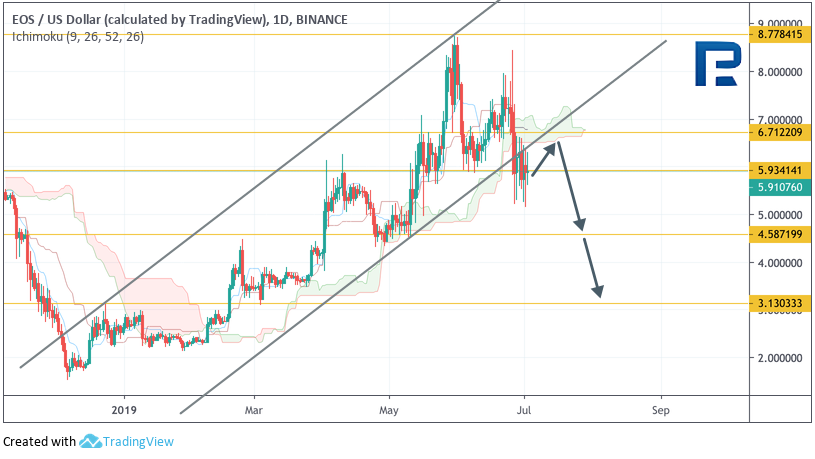 On the four-hour chart, EOS pushes away from the bottom of the cloud. Quotes are clamped under the Triangle model. With the breakdown of the lower border of the figure and closure below the $ 5.30 level, it is worth expecting the continuation of the fall to the level of $ 4.38.

Cancellation options with a decrease in cryptocurrency can make a strong rise and the breakdown level of $ 6.50. It will also indicate a breakdown of the upper boundary of the indicator cloud and an attempt to resume growth with the first target at $ 7.80. 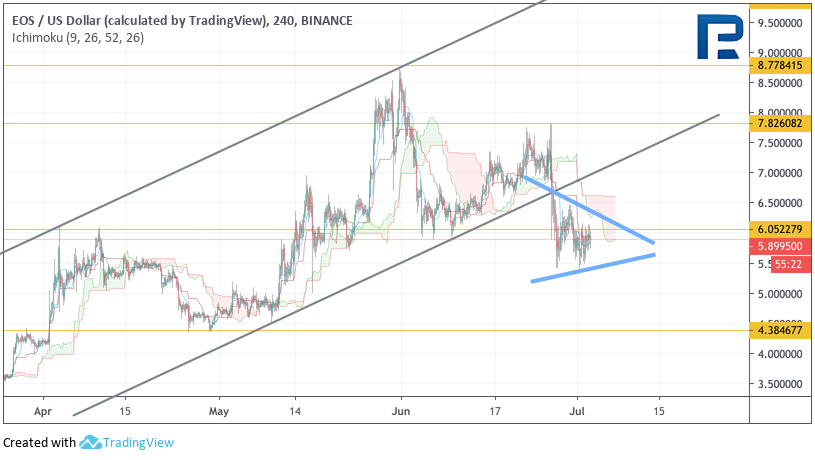 Ethereum continues to trade in the ascending channel. Moreover: the buyer manages to stay above the important level of support.

A strong signal in favor of continuing growth is the next test of the support line on the RSI indicator. As you can see, this is the second test of this line, after which we can expect growth from current levels.

The first goal of raising quotes is the $ 385 mark. Cancellation of this option can be a fall and a breakdown of the level of $ 261, which will indicate the output of the cryptocurrency outside the ascending channel and the continuation of the decline to the target by $ 177. 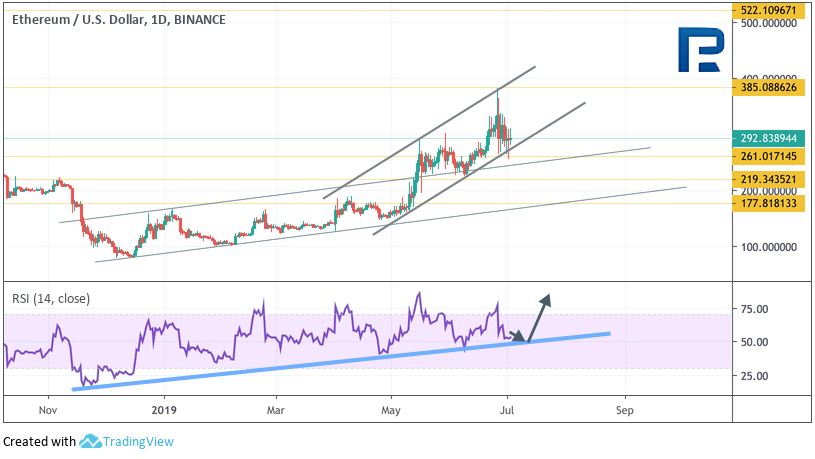 On the hourly chart, Ethereum is clamped within the “Wedge” figure. As the main trading idea, a rebound is expected from the upper border of the model and a fall to the bottom at $ 263. In favor of the reduction also signals the test line resistance on the RSI indicator. 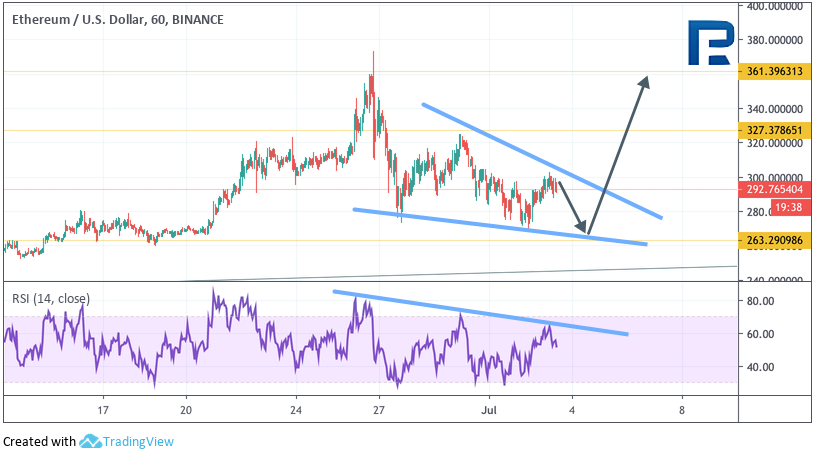 LTC is corrected, too. However, the price continues to aggressively test the lower border of the Bollinger Bands. LTC/USD are locked within the ascending channel, which generally indicates a possible continuation of the rise.

According to the main trading idea, a decline is expected and a test of the lower boundary of the channel at $ 102.40. Next – a rebound and continued growth with the first goal at $ 160. Confirmation will be the breakdown of the resistance level and consolidation above $ 126.

Cancellation options with the development of an upward trend will fall with the breakdown of the lower boundary of the channel and consolidation below the level of $ 100. In this case, a decline is expected with a target of $ 64. 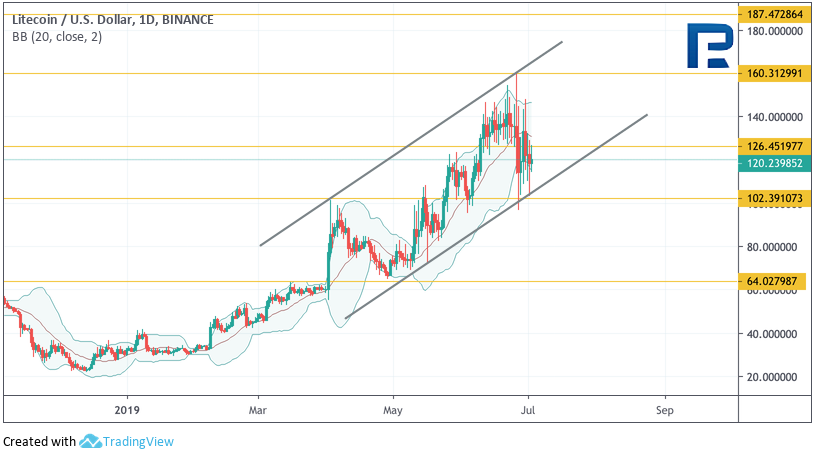 On the four-hour chart, “digital silver” is trading above an important area of ​​support – $ 102. While buyers manage to keep above the lower boundary of the channel, we can talk about the continuation of the rise.

Moreover, this movement pattern is a trend continuation pattern called “1: 1”. The purpose of working out such a model is the area at the level of $ 185. In favor of this option, there is a rebound from the trend line on the RSI indicator. Confirmation will break down the resistance line on the indicator.

Cancellation of this option is a drop and a breakdown of the level of $ 100, which will indicate the quotes out of channel and the continuation of the fall to $ 65. 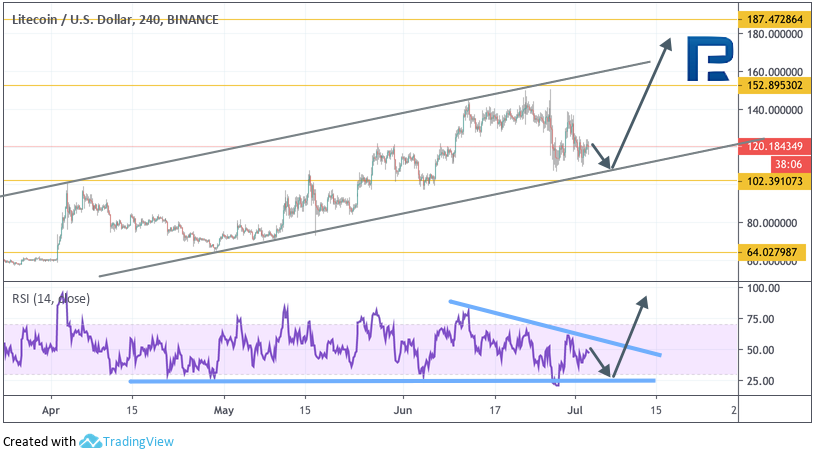 TRON tests support areas. In general, the potential remains for continued growth, as long as buyers manage to stay above the lower boundary of the rising channel.

However, a full-fledged rise does not work – as we see, when testing the downward resistance line on the RSI indicator, the quotes are repelled from the highs and go into correction. Now, the indicator values ​​are testing the support line, which indicates a rise right from current levels with the first goal near $ 0.0419.

It is possible that buyers will be able to raise the price even higher – to the upper boundary of the channel. However, for strong growth it is important to see the breakdown of the resistance line on the RSI indicator. The cancellation of this option will be a fall with the breakdown of the lower boundary of the channel and the price fixing below $ 0.02. In this case, the next goal will be to reduce the level of $ 0.09. 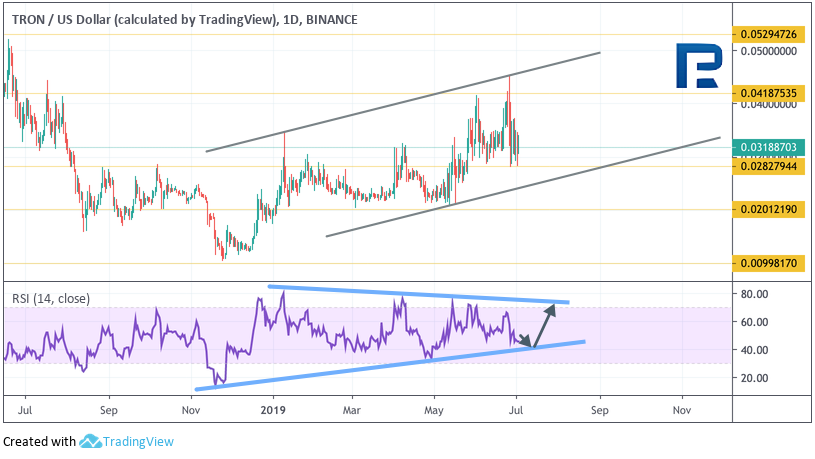 On the four-hour cryptocurrency chart, a bullish 5-0 model is being formed. In the framework of this model, after the test of the lower boundary of the channel, growth is expected to continue with an update of the local maximum area. Cancellation of this option will fall with the breakdown of the lower boundary and fixing quotes under the level of $ 0.0282. In this case, it is worth talking about the continuation of the decline with a goal at the level of $ 0.02. 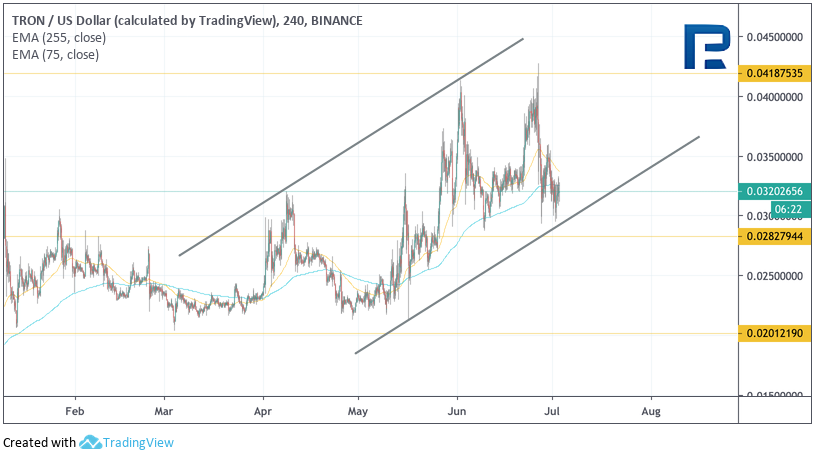