Cryptocurrency Market Analisys: Bitcoin Is Trying To Break The Resistance

There are a lot of interesting news on the cryptocurrency market. EOS is growing due to the Block.one announcement regarding the further development of the project. Dan Larimer said that in June will happen something important for the cryptocurrency and the entire project, but what exactly remains a mystery.

Platform Huobi plans to launch contracts for XRP cryptocurrency already before March 29. There will be 3 contracts available: for one/two weeks, and also for a quarter.

From the point of view of technical analysis, the cryptocurrency market does not stop trying to complete the correction period and develop a new wave of growth in order to update the highs. Perhaps this will be the last impulse before the formation of a medium-term wave of decline.

Over the past week, the overall and long-term picture of Bitcoin has practically not changed. If we briefly describe the movement of the last week, then it was a downward correction after testing local highs.

At the moment on the 4-hour timeframe quotes are in a downward corridor. Taking into account the attempt to break through the support line of the previous growth channel and the downward direction of the MACD indicator lines, the market suggests considering a further decline to the projection support level - $ 3,777, and during its breakdown - to the main support at $ 3,585.

In addition to this option, you must consider an alternative growth scenario. Its implementation is possible after the breakdown of the local psychologically important resistance at $ 4,000, after which the market will be able to rise to the medium-term resistance level - $ 4,150. 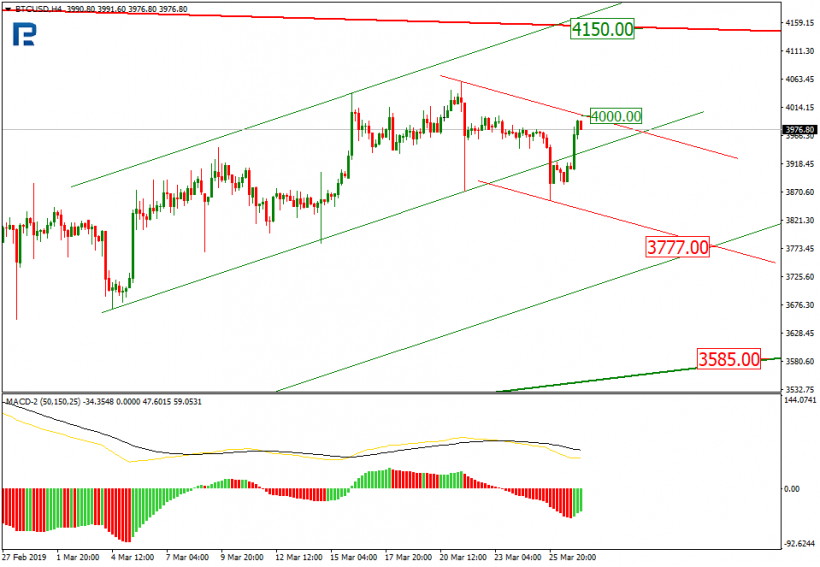 On the 1-hour chart we can see that after the Golden Cross and the Stochastic indicator exiting the oversold zone, the market began to develop a short-term growth impulse. The main purpose of the impulse is testing and breaking resistance at the $ 4000 mark. The next short-term growth target will be projection resistance at $ 4,045. Short-term support for current growth is the $ 3,925. 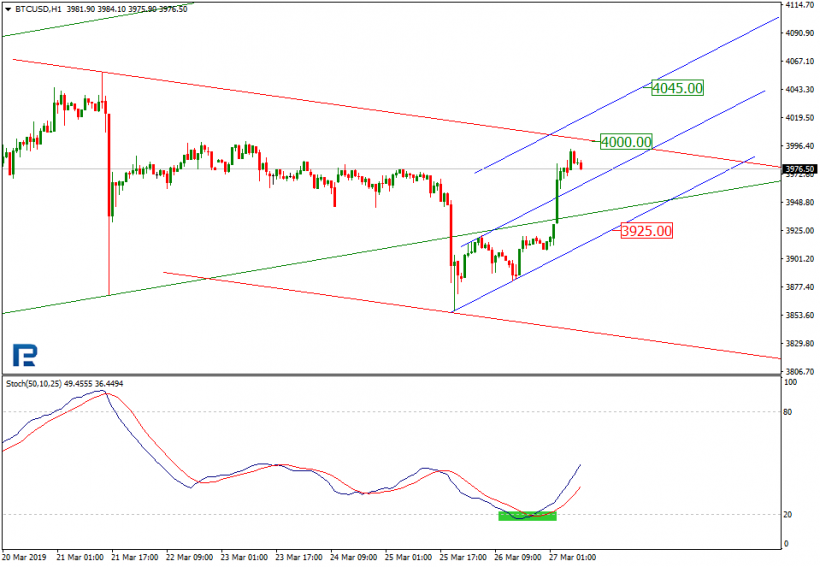 The technical picture of the EOS on the 4-hour chart shows the way out of the correctional consolidation channel upwards. A new growth momentum is aimed at reaching the long-term resistance line at $ 4.42. The formation of the “Golden Cross” on MACD is a confirming factor in favor of further growth. Primary support is at $ 3.70. 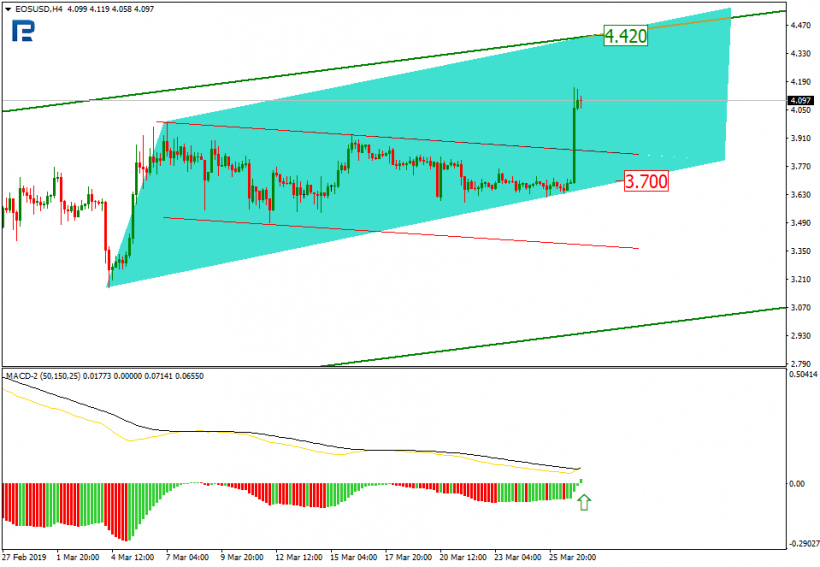 The 1-hour EOS chart demonstrates a stop in the growth impulse development, and the entry of the Stochastic indicator lines into the overbought zone may indicate a pullback potential. As its goals it is worth considering the levels of 23.6% (4.03), 38.2% (3.96) and 50.0% (3.89) on the Fibonacci scale. The breakdown of local resistance at $ 4.16 and consolidation above it can be a signal of the continuation of the upward trend.

The cryptocurrency Ethereum is still in the corrective phase of a short-term nature, while the medium-term trend is still upward.

From the point of view of technical analysis, the short-term uptrend channel was broken by the breakdown of the support line. This may bode down to the main support line - the level of $ 119.65. But with all this, the local decline did not radically change the situation, since the fractal support levels were not overcome.

The dynamics of the MACD indicator indicates the possibility of further decline in quotations. The key resistance of the short-term order is the local peak - $ 143.58. Overcoming this level will give quotes the opportunity to rise to the resistance of the previous corridor - the level of $ 155.20. 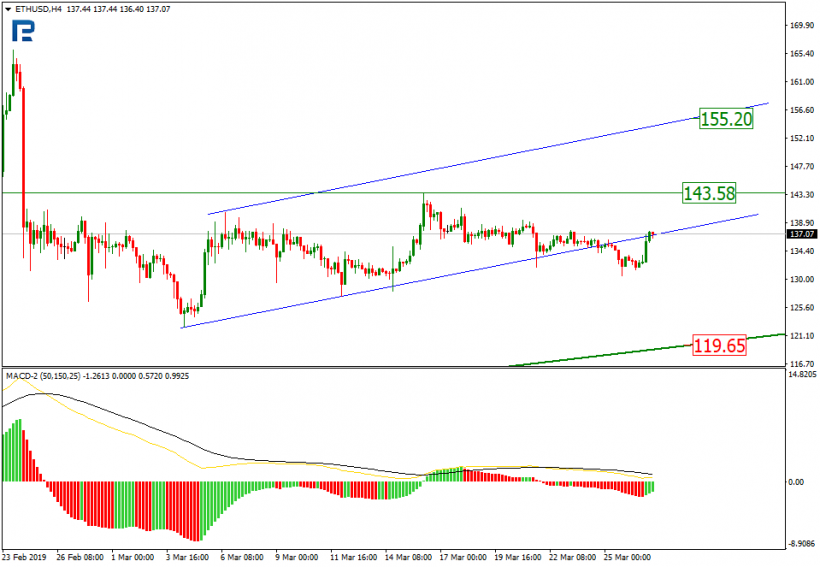 A short-term picture of Ethereum's 1-hour chart demonstrates testing of a broken support line from below. At the same time, we note that the short-term downtrend corridor was broken by the growth impulse. As a target for the development of an upward impulse, we can consider projection resistance at $ 140.90. At the same time, the Stochastic indicator formed the “Golden Cross”, and the lines went out of the oversold zone, which also confirms the growth hypothesis. 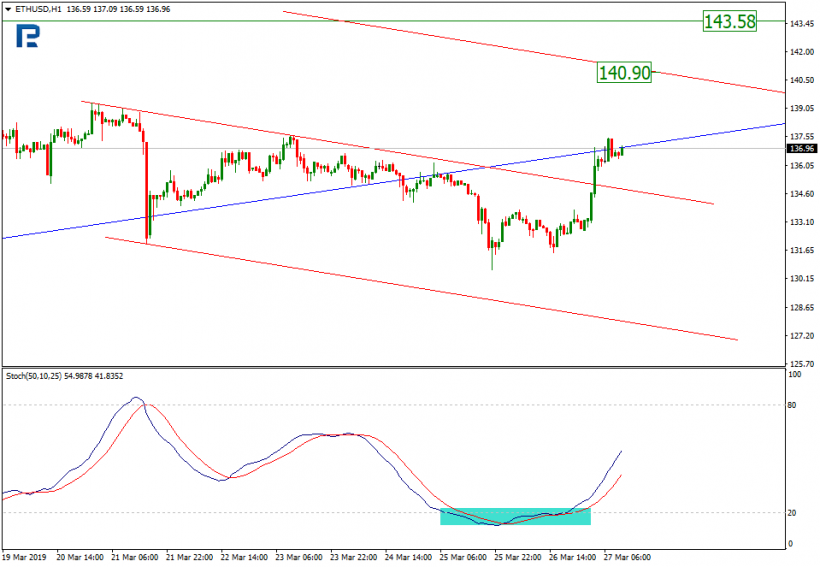 LTC/USD dynamics on the 4-hour chart shows the period of corrective consolidation. To date, the correctional trend has been able to reach only the level of 23.6% Fibonacci, but a decline to the level of 38.2% ($ 54.60) is not excluded. Such a decrease may be the reason for testing the line of support for the current growth channel. The rebound from the support line and the subsequent breakdown of the impulse of resistance at $ 62.16 may open the quote to the potential resistance level - $ 67.50. 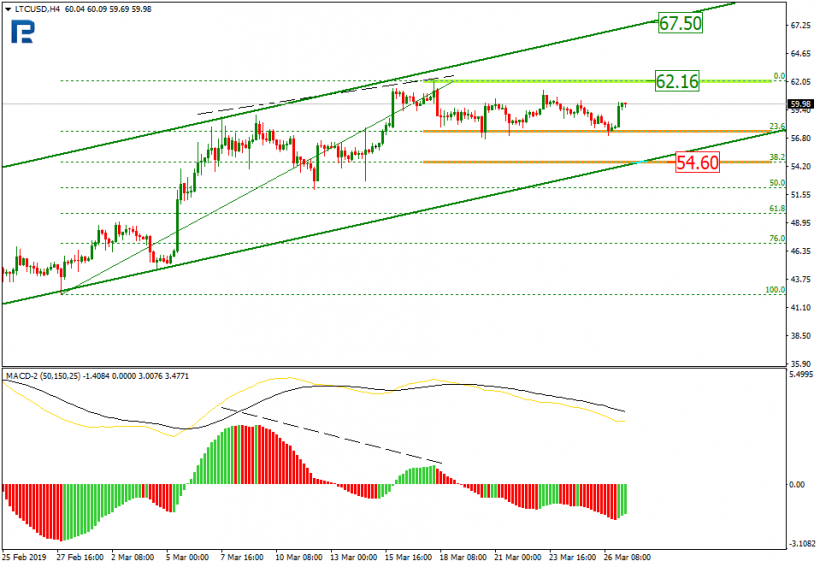 The picture of the 1-hour chart LTC/USD shows a break in the downtrend after the breakdown of the resistance line. The Stochastic indicator formed the “Golden Cross”, and the lines went out of the oversold zone, which, in turn, may indicate a potential for further increase of quotations up to a peak of $ 62.16. Support for the current growth has a level of $ 59.00. 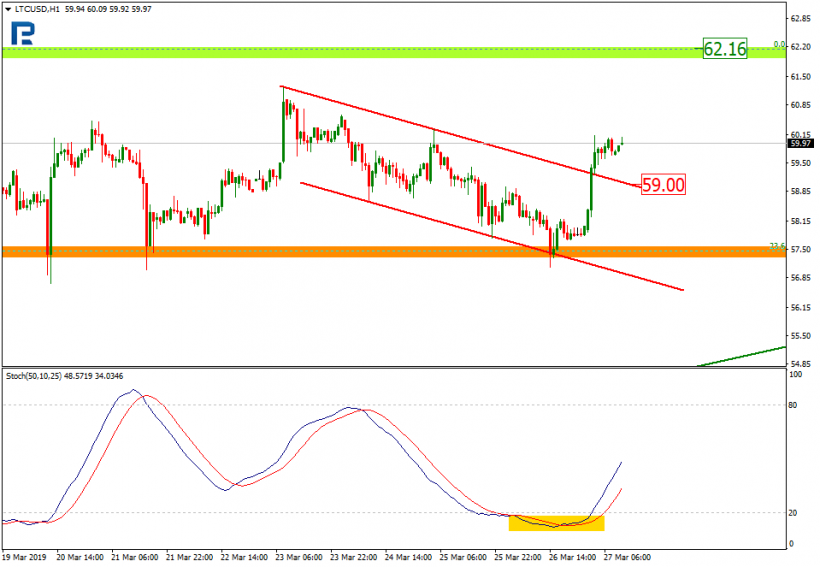