The main cryptocurrency is trading above an important level of support – $ 9100. The potential remains for serious growth and renewal of the local maximum. Moreover, we observe several bounces from the lower boundary of the Triangle model. At the same time, each new test is higher than the previous one. This may also indicate the appearance of bulls in the market and the importance of the lower boundary of the model. A breakdown of the level of $ 11000 seems like a good signal to confirm the upward trend. A very negative scenario for BTC/USD is a breakdown of the lower border. This will indicate a strong correction to the level of $ 7200.

Unfortunately, alternative cryptocurrencies are under pressure. There are no high-quality signals for a U-turn and the beginning of an upward movement. Litecoin and Bitcoin Cash are moving within the framework of reversal models, which at any moment can “fail” noticeably below current levels. Technical analysis of EOS and Ethereum also indicates a high probability of dropping to new lows.

BTC/USD keeps trading in the Triangle model. The movement within the framework of such a model indicates the presence of uncertainty and a decrease in volatility but subsequently is followed by a strong movement towards breakdown. In most cases, the “Equilateral Triangle” model breaks in the direction of the trend, but the breakdown of the lower border should not be excluded. According to the daily chart, Bitcoin is pushing away from the MA area, which still indicates the presence of an uptrend. An important area of ​​support is located at the level of $ 9115 and a breakdown of this area will set the leading asset in a strong correction to the levels of $ 7200 and $ 5825. As the main trading idea, we should still expect a rebound from the lower border of the ascending channel and an attempt to move up with the first target at $ 11005, a breakdown of which will indicate a high probability of reaching the area of ​​$ 12385. 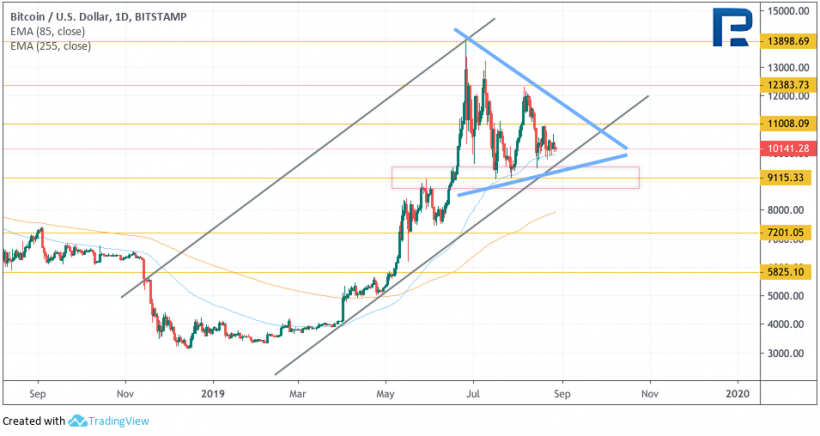 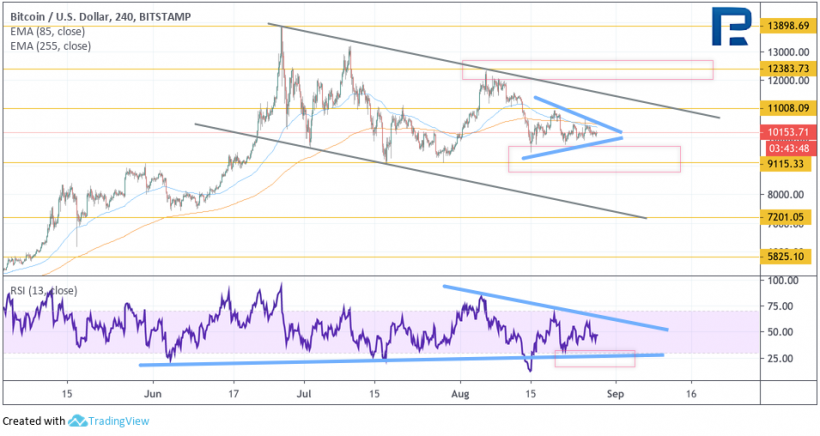 The second-largest cryptocurrency is still moving within the framework of the formation of the upcoming Wolfe Wave model. To complete the formation of the pattern, another decrease to the target by $ 146.00 is not enough, from where we can expect the beginning of the upward movement. MA also cross, which indicates the pressure of sellers. A test of the support line on the RSI indicator will be in favor of a potential rebound and the start of upward movement. A kind of confirmation of the idea will be a breakdown of the downward trend line on the indicator. The potential goal of growth and development of the upward model in the area of ​​$ 275.00. The end of such a scenario will be a strong fall and a breakdown of the $ 120.00, which will indicate the reversal and the continuation of the downward movement. 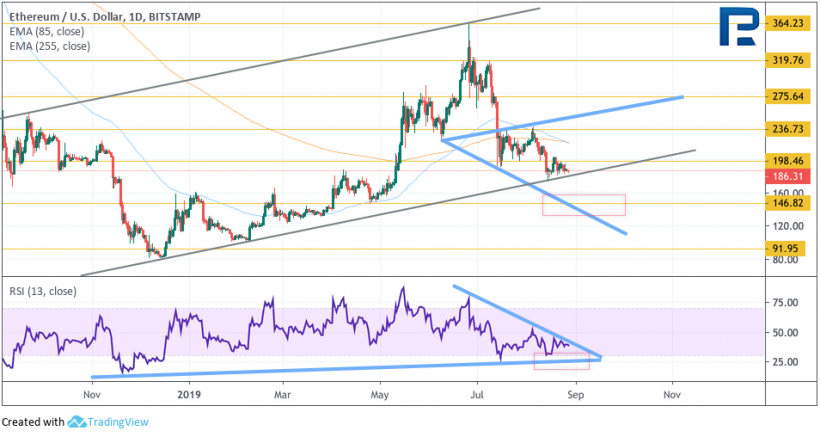 The 4-hour chart of the asset was squeezed within the framework of the Triangle model once again. Moreover, there is a similar structure on the RSI indicator, where a test of the resistance line will provoke a cryptocurrency rate drop. As a short-term trading idea, we should expect a rebound from the upper boundary of the Triangle model and a move to the level of $ 146.00. A confirmation of the decline will be a breakdown of the support level and consolidation at $ 174.95. The end of the negative option will be a strong growth and a breakdown of the resistance level with consolidation above $ 200.00. The immediate goal of the rise, in this case, will be the area of ​​$ 236.00. 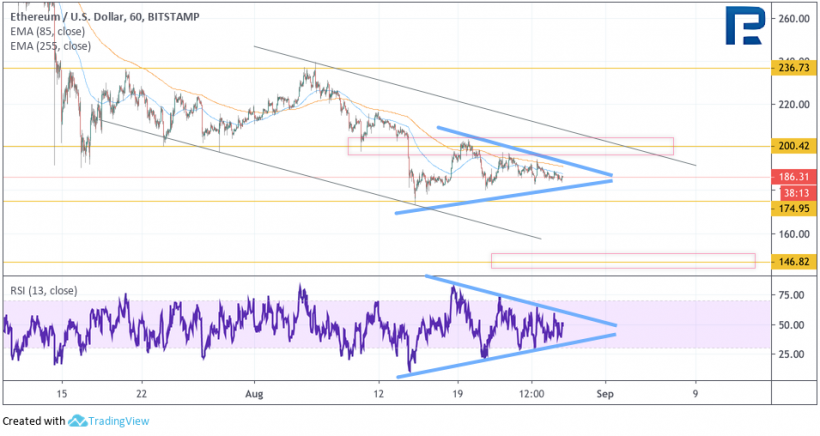 On the daily chart, cryptocurrency continues to trade under the Ichimoku Kinko Hyo Indicator Cloud, which indicates a continuing downward trend. Here we can observe constant bounces from the signal lines of the indicator, which demonstrates the strength of the bears at the moment. A return to the upward trend should be expected only with a breakdown of the upper boundary of the Indicator Cloud and consolidation above the level of $ 5.00. As part of the main trading idea, it is expected to continue to decline with a target of $ 2.15. Confirmation is the breakdown of the lower boundary of the rising channel and a fall below the level of $ 3.20. 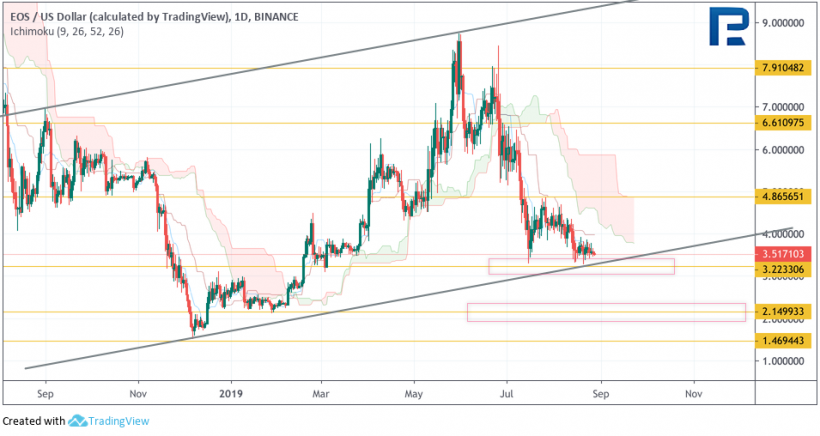 EOS continues to move within the bear channel on the 4-hour chart. We can also assume that the target to the fall is the area at the level of $ 2.15. Therefore, a test of the upper border of the downward channel and a continued decline is expected. Repeal of the option with the development of the bearish trend will be a strong growth and a breakdown of the upper border of the Indicator Cloud fixing  EOS/USD above the level of $ 4.00, which will indicate continued growth towards the target by $ 4.85. 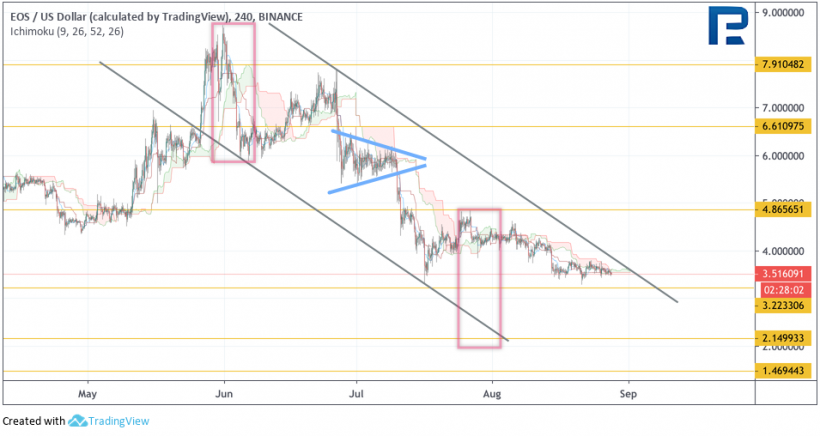 Digital Silver remains below the Neck line of the Head and Shoulders reversal pattern. The purpose of the reduction is still the area below the level of $ 40.00. Moreover, LTC/USD “fell” under the middle line of the Bollinger Bands indicator, which indicates strong pressure from sellers. The immediate goal of the fall is the area of ​​$ 64.00. To cancel the option with a decrease in the bulls, it is important to return above the level of the right “Shoulder” of the reversal model – only in this case, we can expect another wave of growth. In the meantime, the asset quotes are under the resistance level, the main idea involves the further development of the downward trend. 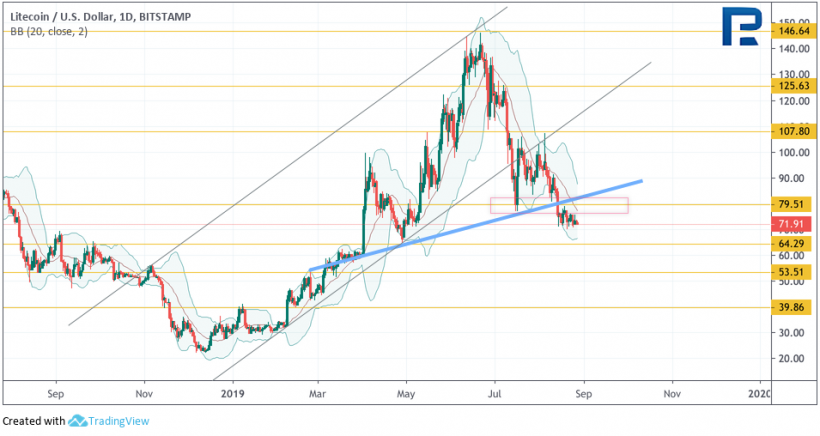 At smaller time intervals, we observe a decrease in volatility, the Triangle model is also formed here. The immediate goal of the fall is an area of ​​about $ 64.30. Expect a rebound from the upper boundary of the model and continued downward movement. With consolidation below the support level, the next goal of the fall will be the level of $ 53.50. The cancellation of the option with a decrease will be a breakdown of the upper boundary of the Triangle model and consolidation above the level of $ 79.50. This can trigger a move beyond the borders of the downward channel and the beginning of growth to the level of $ 107.80. 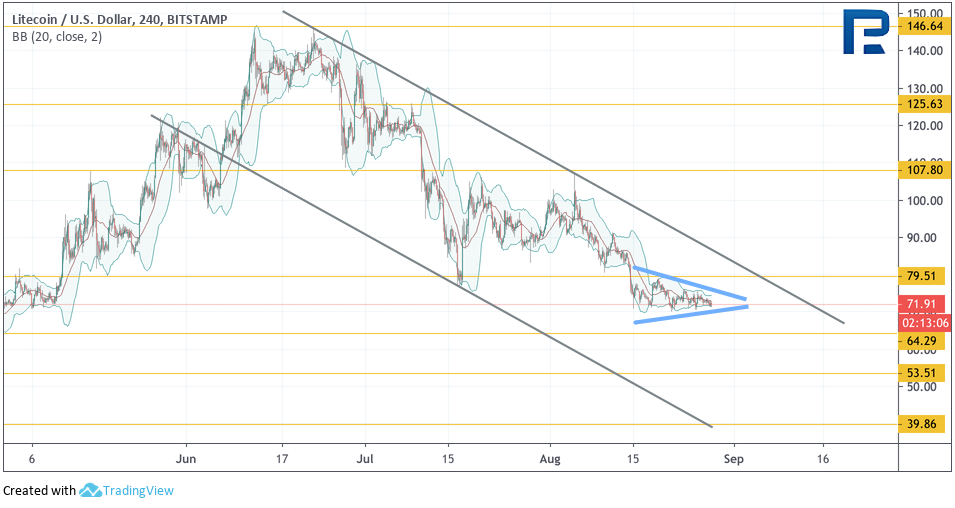 Bitcoin Cash continues to move under the Ichimoku Kinko Hyo Cloud, which still indicates a downward trend. As you can see, prices push off from the bottom of the Cloud, which once again demonstrates the power of bears. It is worth expecting the resumption of growth only with a breakdown of the upper boundary of the Indicator Cloud and consolidation above the $ 400 level. The main trading idea is the continuation of the fall to the first target at $ 248. The breakdown of this area will support the further downward movement to the level of $ 177, as part of the beginning of the development of the “Head and Shoulders” reversal pattern. 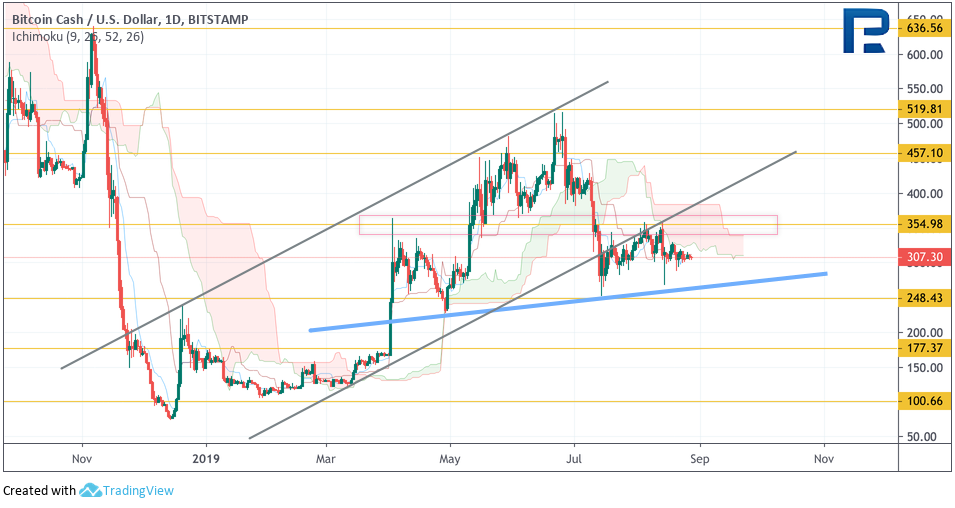 On a 4-hour chart, BCH/USD is trading within a bearish channel. An important area of ​​resistance is located at $ 354. Its breakdown will indicate the resumption of growth to the first target at $ 457. However, as the main option, we should expect a test of the upper border of the downward channel and a continued decline to the target at $ 248. In favor of such a scenario, a rebound from the resistance line on the RSI indicator will come out. As you can see, the indicator values ​​have already repelled several times from this line, which provoked a downward movement. 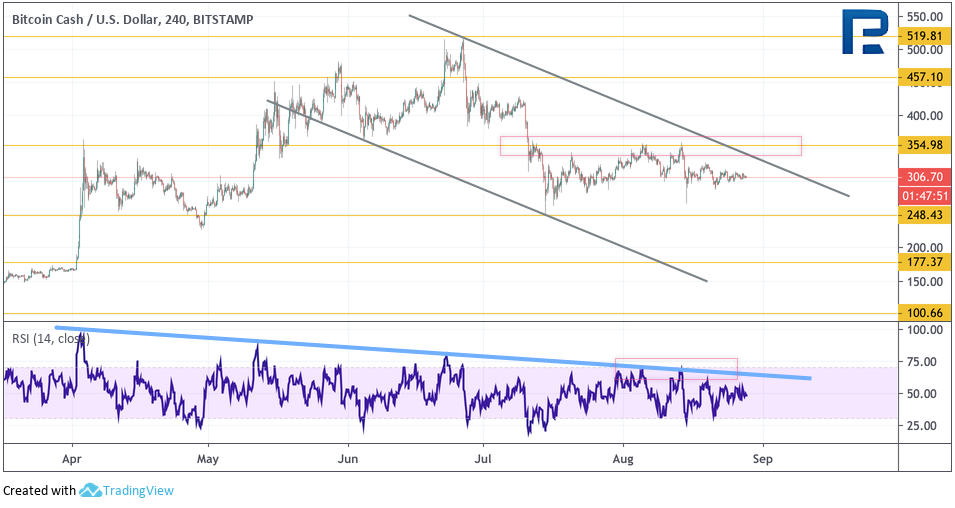 Ethereum Price Analysis: ETH/USD Prepares For A Breakthrough To $ 2,000

Bitcoin Price Analysis: BTC/USD Is In Danger Of Collapse