The best cryptocurrency advice is not to ignore Bitcoin and the entire market, especially now that it is becoming part of the international financial system.

Today we will analyze the listing of Coinbase on stock exchange, discuss which major company will buy BTC after Tesla, and analyze the Bitcoin and Ethereum rates.

The main event for the crypto industry in recent weeks was the listing of Coinbase. Having opened at $ 381, with the announced preliminary price of $ 250 per share, the price soared to $ 429, after which the correction began. 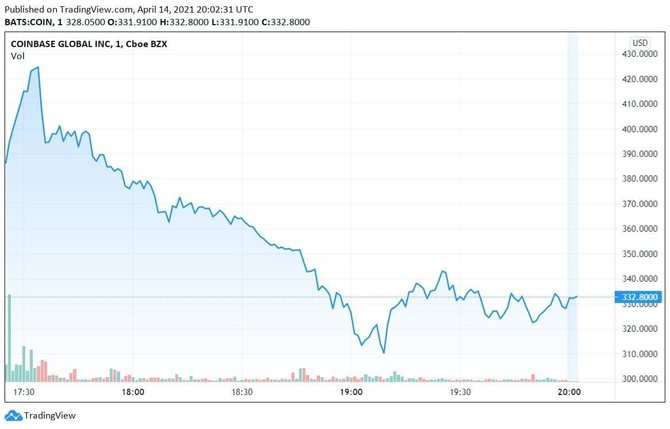 Trading closed at only $ 328, but even with this result, Coinbase became the most expensive American exchange with a market cap of $ 86 billion, whose securities are traded on the stock market. It is also known that among the buyers there is Katie Wood’s ARK Invest fund, they acquired 749,205 shares, paying at least $ 246 million.

Now no one will be able to say that your Bitcoin and cryptocurrencies are being traded in some unknown place and this will continue until the regulators have noticed. We also add that Coinbase is not only a trading platform, they have many additional services, and one of them is the storage of cryptocurrency for large institutional investors Coinbase Custody. It was this exchange that helped Elon Musk and Tesla buy $ 1.5 billion worth of bitcoins.

We don’t know yet how many big wallets have already entered the crypto market. Here is a list of companies and funds that have disclosed investment information. And how many are still in the shadows, but the reporting season has already started in the United States and there they will be required to indicate a new type of assets in reserves and its value.

There are rumors in the media that the next big buyer will be Walmart, which operates the world’s largest retail chain. Their reporting time will come up in May, so the intrigue will hold on for about another month. But if these suspicions turn out to be true, and even more so if Walmart promises to add BTC payments, then price of $ 115,000 will still seem very small.

This is exactly the forecast given by the Pantera Capital venture fund, which specializes in investments in blockchain and cryptocurrencies.

And the guys from the WallStreetBets community can help further growth, which allowed limited publication of content about Bitcoin, Ethereum and Dogecoin in the main forum thread. So we are waiting for the continuation of the Tuzemun Dogecoin, we will talk about the future of Ethereum further, and now let’s take a little look at the price of Bitcoin.

After setting a new high of $ 64,717 at the average rate, as well as the completion of the Coinbase listing event, Bitcoin can afford a slight correction: 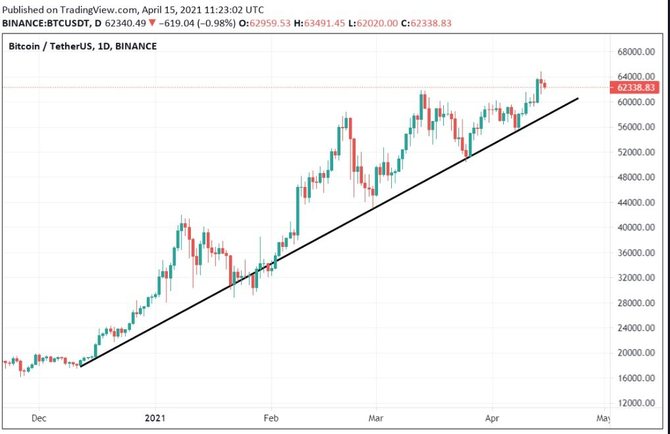 A return to the uptrend line that begins in December 2020 could result in a short-term drawdown just below $ 60,000.

When Berlin hard fork took place, 74 clients were synchronized with the new version of the network, although immediately after the required block was mined, they reported synchronization problems with the OpenEthereum nodes.

It appears that there is a consensus error at block 12244294. And as far as we know it only affects Openethereum Nodes, the core devs are diagnosing the root cause.

We think the developers will cope with the problem, and the Ethereum blockchain will continue to work in a normal manner.

As for the update itself, these are technical changes to improve the network and preparation for the transition to the POS algorithm. A scandalous update was excluded from it, which miners do not like, because they intend to simply burn part of the commission and they will lose money. But the developers believe that this will reduce the number of coins and this will contribute to the long-term growth of the price of Ethereum. Therefore, they intend to add this update to London hard fork.

As a rule, the price rises before the hard fork, and after that we get a pullback. If you look at the chart and draw a trend line similar to the one that was done for Bitcoin, Ethereum looks strange: 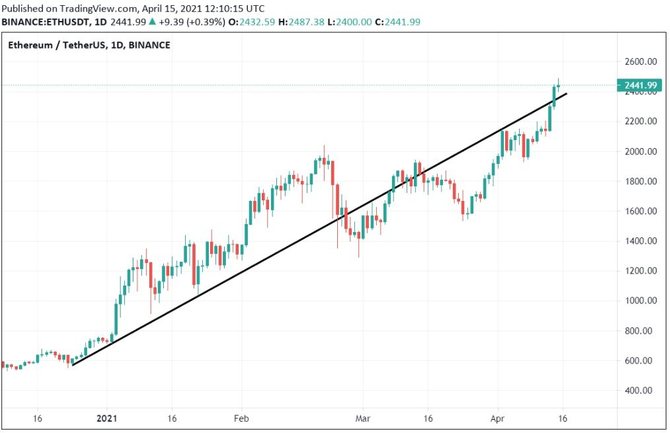 The price has already tried to rise above this line three times, but the Doji candlestick formed on the daily chart hints at uncertainty in the market, which can be regarded as weakness of buyers.

But when analyzing Ethereum price, you always need to take into account where Bitcoin will go. And if there is growth, then the TOP-2 cryptocurrency will again go to update the highs.

And there are more daring predictions, such as $ 10,000 dollars for 1 Ethereum from professional trader Scott Melker.
He believes that buying today in cryptocurrencies is tantamount to investing in the development of the Internet in the nineties of the last century. The trader notes that for a price of $ 10,000, Ethereum should only grow fivefold, which is not that much.

In this case, Ethereum market cap will exceed $ 1 trillion. It sounds incredible, but we can imagine that this will be the maximum capitalization during the completion of the current cycle. By this time, the price may well have passed more than half of this path and then make a sharp increase when investors start transfer funds from Bitcoin into altcoins, as it was in January 2018.

And do not forget that Buterin plans to create a global world computer, judging by the popularity of decentralized applications, they are starting to get it and investors will find money to pay for this.

TOP-10 Cryptocurrencies In May 2021: Which Coins To Invest In