Paying for goods and services with cryptocurrency may become the norm in the near future – Visa and Mastercard come to the scene.

The market capitalization of the digital asset market in January exceeded $ 1 trillion and attracted the attention of not only investors, but also large companies. By mid-February, Bitcoin reached the $ 50,000 with the new ATH at $ 58,000.

Mastercard announced that the company will start working with cryptocurrencies this year. But not all digital assets will be admitted to calculations: the payment system will only support stablecoins. The company believes that such assets are more reliable and secure, so crypto users will give preference to them.

Their decision to support Mastercard cryptocurrencies is explained by the growing popularity of cards with the ability to convert fiat into digital assets. Now the payment system is cooperating with several projects that issue such cards: for example, Wirex and BitPay.

In addition, Mastercard talked about “active interaction” with central banks to launch government digital currencies. Most likely, the payment system will support them as well. 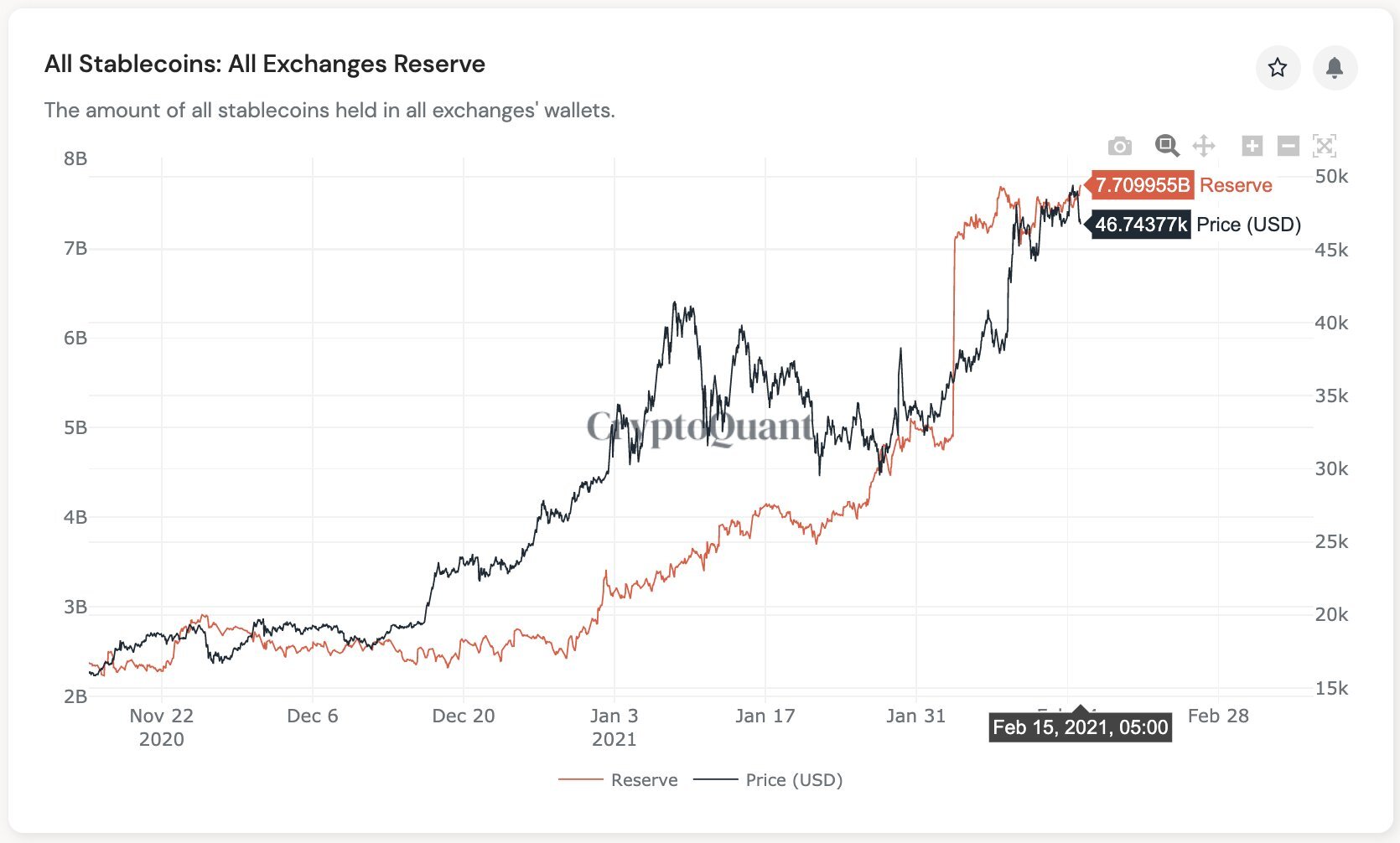 The volume of stablecoins on the wallets of cryptocurrency exchanges in February updated its historical maximum several times, CryptoQuant data says. Now the figure exceeds $ 7.7 billion, most of which comes from USDT.

Visa will provide credit institutions with a set of APIs that will allow them to use the company’s platform to access the cryptocurrency market.

First Boulevard is a Neobank for Black America. The founders see it as their goal to narrow the black-white wealth gap. A full-fledged neobank plans to launch this year – now users can get early access.

So far, we are talking about a mechanism that involves the conversion of digital currency into fiat. Although the company admits that in the future Visa users will be able to pay with cryptocurrencies directly, without prior conversion to fiat. To expand the access of the company’s clients to cryptocurrency operations, Visa intends to cooperate with crypto wallet developers and digital asset exchanges.

Probably, Visa will start supporting cryptocurrencies with stablecoins: the head of the company Alfred Kelly agrees with the position of Mastercard and considers stablecoins to be an “innovation in the world of payments.”

Tesla said it plans to accept BTC as payment in the near future. If that happens, Tesla will be the first big business to support digital assets. Elon Musk’s company also invested $ 1.5 billion in Bitcoin for “more flexibility, diversification and increased profit from cash.”

Amazon may follow in Tesla’s footsteps: the company plans to launch a crypto project in Mexico. Amazon did not disclose details, but the description of one of the vacancies of the project says about a product that will allow offering customers payment in digital assets:

What Cryptocurrencies Are Worth Investing In 2021: 4 Profitable Coins How Robinhood Has Escaped Bankruptcy And Went On IPO Why Is Correction A Good Thing For The Crypto Market? Is It Time To Sell Bitcoin: The Likelihood Of BTC Collapse In April NFT: How The Unique Token Market Works And What You Need To Fear Why US Can Ban Bitcoin And What The Future Is Waiting For Cryptocurrencies Best Cryptocurrencies 2021: Which Coins To Invest In In April Is Tether A Scam?What Is Behind The Emission Of Tether Crypto Predictions For 2021 Millions Of Dollars For Memes: NFT Boom Is Coming What Cryptocurrencies To Invest In March 2021: TOP-8 Altcoins Crypto Portfolio Of Billionaire: Bitcoin Or Ethereum
Show more Hide