Do you still think Bitcoin is something fleeting? There are other news. At a cost of $ 9242, Bitcoin’s market cap surpassed the Australian Dollar. And its rate continues to grow.

Which Countries Have The Largest Monetary Base In The World?

There is Crypto Voices chart beliw. Until now, the largest monetary system in the world is gold, the capitalization of which reaches $8 trillion. However, Bitcoin is already far off on his heels. 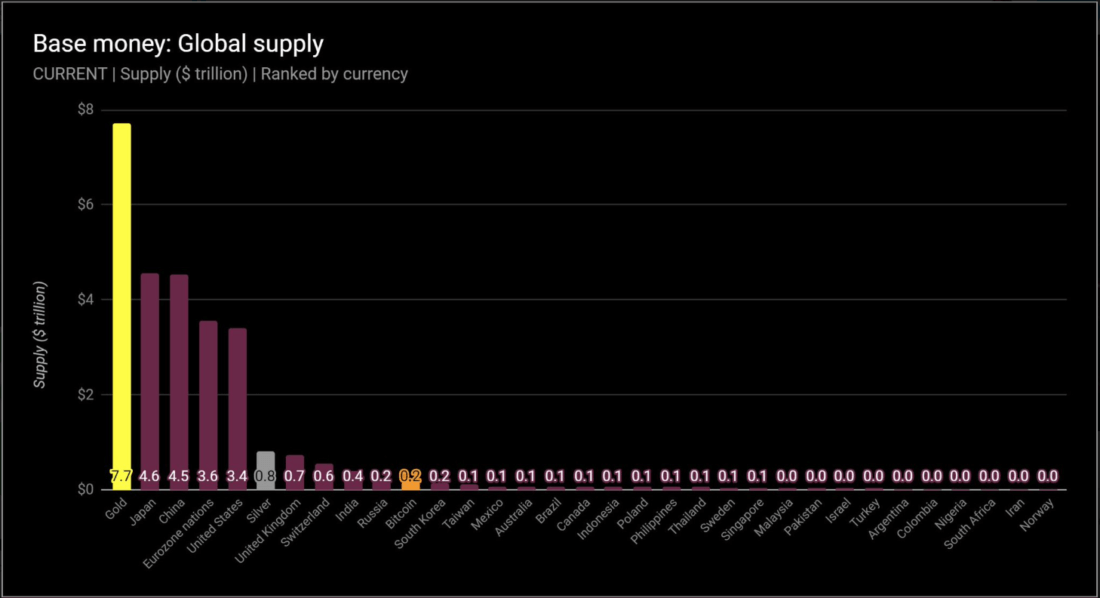 But if we are talking about measuring the monetary base of countries, then this metric includes the total amount of money in circulation or funds on commercial deposits in the central bank. Gold reserves are not taken into account. It is not surprising that the United States  places only 4 position, although it is the largest economy in the world. In terms of the monetary base, the first three lines were given to Japan, China and the Euro zone.

Why don't oil countries like Saudi Arabia or the UAE appear on this report? Most likely, because most of their wealth is oil, not cash.

According to Crypto Voices not quite aware of their methodology, but the currencies of Saudi Arabia and Denmark, for example, are pegged to other currencies. Accordingly, their base currencies are the US Dollar and the Euro, so they are not taken into account. It is much more objective to compare the monetary base value of each currency of central banks.

Apart from gold and silver, Bitcoin is now the 8th largest currency in the world. Is it important? Considering the current BTC capitalization of $164 billion and the forecasts of some analysts about the price increase to $40 thousand by the end of 2019, these are quite good indicators. Especially considering that the asset is only 10 years old.

Bitcoin already bypasses the monetary base of Russia, South Korea, Brazil, Canada and Norway. And with an even greater acceptance of cryptocurrency, BTC can overtake India, Switzerland, the UK and even the United States on a monetary basis.