Bitcoin price falls a week and it is below $ 50,000. Many crypto experts are waiting for the start of a serious correction, from 20% to 30%, which will definitely affect altcoins.

Bitcoin fell in two points. Few days before BTC lost -17%, but there were enough people who wanted to buy a sharply cheaper cryptocurrency, and the price was returned by $ 54,000: 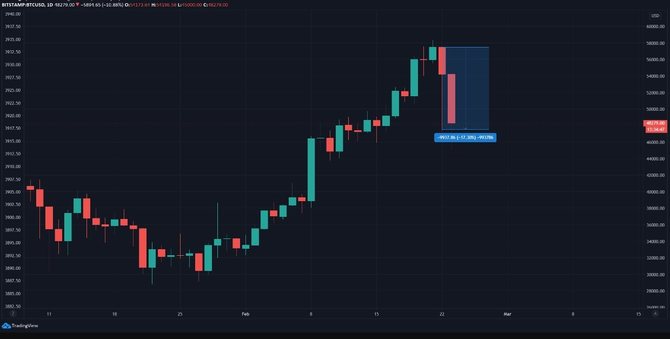 And yesterday we had the second round of the fall: 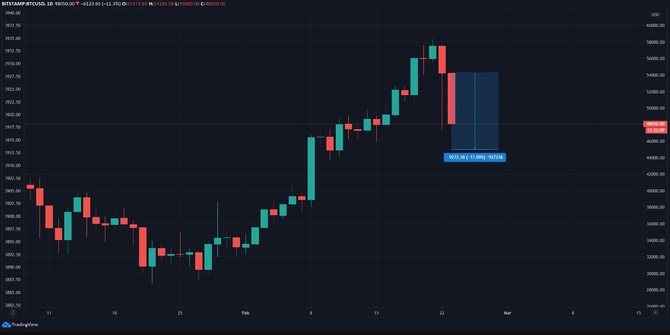 In general, there is nothing wrong, Bitcoin has dropped by 25% and even more before, this is a test of your nerves for strength. If we look at the daily chart, we have certain analogies for the price movement after the first rise above $ 40,000:

Then the pullback was 28% at the low point, and the overall correction reached 32%. If history develops according to that scenario, then by the end of February and the first half of March we can blabber in the corridor from $ 55,000 to $ 40,000.

However, the so-called bull trap scenario still persists. This scenario has not yet been confirmed, but we recall the old target for the correction to the 21-week moving average: 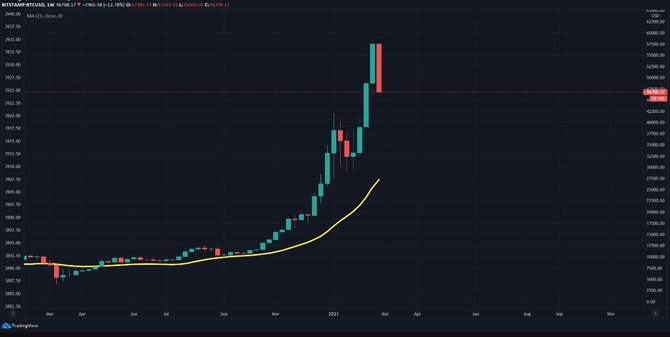 This is the level where the fate of the bull market can be decided and now it is at around $ 27,000.

Note, US Treasury Secretary Janet Yellen criticized Bitcoin recently. We’ve already seen opinions that this cute grandmother scared Bitcoin. But we do not agree with him, because we hear such criticism from some of the representatives of the highest circles of financial power about once a week.

In addition, Janet Yellen had already made a similar statement earlier and changed her mind the same week, saying that when Bitcoin is used legally, it is good. We won’t be surprised if she changes her mind again.

We have previously warned that if Bitcoin does not rise or at least hold the price, altcoins will collapse.

Let’s look at Ripple. The company performed well during the preliminary hearing. XRP proponents generally called it a great victory, the main argument being that the SEC had previously ignored XRP’s status by not defining the token as a security. And the last phrase of the meeting was “XRP to the Moon”.

The companies are not that optimistic until no one has announced that they are returning XRP trading, which would be extremely strong news.

Binance Coin claims to be Bitcoin. Fast and cheap transactions, support of a leading cryptocurrency exchange, prospects for widespread acceptance as a means of payment, and an entire ecosystem for making money with cryptocurrencies like Ethereum. Just a great summary for the BNB token, so what is it really capable of taking the place of Bitcoin?

Let’s discuss this question, but first the story. The Binance empire, and today it is a whole empire in the world of cryptocurrencies, they even own the TOP-1 site in the CoinMarketCap industry. By the way, after buying it, they reworked some of the metrics so that Binance was in the first place. But on the other hand, the functionality of the portal has become many times larger and more convenient.

So, it all started with a modest amount of $ 15 million, which was collected as a result of an ICO back in 2017. Initially, 200 million BNB tokens were issued, of which 40% were kept by the creators of the exchange. The token had the ERC-20 standard and functioned on the Ethereum blockchain. Every quarter, the exchange buys BNB tokens from the market for 20% of the money earned and destroys them, which stimulates the price growth in the long term. Burning will stop when the emission of coins is reduced to 100 million.

When Binance went live and started offering its own token, BNB began to rise sharply in price. Note that today almost every exchange has its own token, but the first was BNB and today it is the most successful.

The first price maximum was set in January 2018, during the altcoin season, and then the rate rose to $ 24. The second significant period was the growth to almost $ 40 in the summer of 2019. Despite the fact that 2018 was a disgusting year for the crypto market, the Binance exchange was actively developing and came out on top.

And when prices went up again in 2019, they launched their own Binance Chain blockchain, where they transferred their token, giving it fast and cheap transactions. This is a fairly centralized network and the exchange does not hide this, but as practice shows, users do not care about this drawback, if only it works well. Also then, Binance launched the IEO hype, when the tokens of a new project were immediately sold through the exchange. To do this, they have a separate Binance Launchpad platform. And although the topic with IEO ended relatively quickly, token sales are still sometimes held there. You can buy new tokens only for BNB. And in addition, the platform has now launched staking of various cryptocurrencies.

While the Ethereum blockchain was kinking due to the popularity of DeFi protocols, and Cardano and Polkadot promised to make better platforms, the top cryptocurrency exchange quickly blinded another centralized network to complement its own blockchain. It was named Binance Smart Chain. You know the story further, Bitcoin grew and set the direction of the entire market, decentralized finance was on the wave of hype, and optimal conditions for their development were created in the Binance Smart Chain network, and now it has already bypassed Ethereum in the number of transactions.

As you can see, BNB grows based on two factors. The first is a bullish market trend driven by Bitcoin. And the second, which allows it to grow faster than the market, is the successful actions of the Binance exchange. They have already launched their payment service there, in general, development continues.

We, as Bitcoin maximalists, are at least 90%, do not believe in the possibility of any other cryptocurrency to replace Bitcoin.

Provided that Bitcoin is doing well with the rising market and now we are just on a correction, we are waiting for BNB at $ 400 after bitcoin grows above $ 60,000. In the future, in case of to the moon, at least for a short time, BNB may rise to $ 1,000 for a coin. This is not a financial recommendation, but just a personal opinion.

Monero Holders Can Participate In Yield Farming On Sienna Platform