Bitcoin Price 2020: What Differs With Previous One

Bitcoin value has grown by more than one and a half times during this year. The quotes crossed the $ 19,000 mark by the end of November, which inevitably gave rise to many hypotheses about the reasons for what was happening, as well as comparisons with the 2017 cryptocurrency boom.

2020 Vs 2017: Volatility And Overvaluation Have Become Lower

Despite the high price, this year’s rise in the price of BTC has not been accompanied by peak volatility. Last time it soared to a five-year high during the March collapse. This happened against the backdrop of the first wave of the pandemic.

Consequently, most capitalized cryptocurrency became less volatile as a result of market adoption and increased liquidity by the end of 2020. Implied volatility in November reached 3.7%, according to Skew data. As a rule, such an excess of one indicator over another indicates overbought options and investors’ fear.

You can find out how many times the current market cap of an asset exceeds the total actual cost of “buying and selling” Bitcoin for the entire period of the network’s existence by calculating MVRV. The Market-Value-to-Realized-Value indicator is the ratio of market capitalization to realized capitalization. At the end of 2017, the indicator was close to 5, as of November 17, it reached 2.5. This means that the ratio of the market price to the average price at which the largest cryptocurrency is held is almost half that of the previous peak.

The average volume of one transaction is already far from the levels of the end of 2017. Then the value exceeded $ 50 thousand, and in November 2020, the maximum only slightly exceeded $ 15 thousand. The median value at the peak three years ago was $ 500, last month – about $ 150. The total volume of transfers per day does not differ so significantly: $ 10.8 million at the end of 2017 against the November maximum of $ 7.2 million, while the number of active addresses approached the previous peak: 1.19 million in November against 1.25 million at the end 2017 year. In addition, the total volume of fees in the network is several times less than the values ​​of the previous peak.

ICO Boom Has Been Replaced By DeFi

Over the past years, the level of Bitcoin dominance in the total capitalization of cryptocurrencies has been growing. As of November 19, it reached 67%, according to the coin.dance. Note, the situation was reversed at the last peak. In 2018, during the boom in the ICO market, altcoins were more popular. They occupied up to 70% of the total market cap of alternative digital assets.

By the beginning of COVID-19 pandemic, the number of token placements fell to the level of the spring of 2017.

According to icоbench and icоdrops, only 1% of funds from the total amount of funds raised over the past seven years were collected at ICOs in three quarters of 2020. 2018 should be considered the most successful – it accounts for almost 65% of all token placements.
Now a new point of attraction has appeared on the cryptocurrency market – decentralized finance (DeFi). The interest in the industry is evidenced by the rapid growth in the volume of blocked funds: 21 times since the beginning of the year as of December 4.

The most popular segments of DeFi market are lending and decentralized exchanges. As of the end of the 3Q 2020, each of them accounted for about 37% of blocked funds. However, so DeFi cap is only 3% of the total cryptocurrency market cap.

There Are No Mass Liquidations Yet, The Trading Volume On Crypto Exchanges Is Not Growing

Against the background of rising bitcoin prices, open interest in futures on CME peaked and reached $ 1 billion in November. The volume of trading in bitcoin futures on the exchange reached $ 1.5 billion.

According to Skew data, the volume of liquidations under the perpetual contract XBTUSD for less than November amounted to $ 337 million. While value was almost $ 3 billion in March. The maximum leverage on this contract is 100x, which means that there are 100 borrowed units per unit of equity. We may see short liquidations later when the price sets a new record. This time, the rise in the rate did not lead to an increase in bitcoin trading volumes on crypto exchanges. According to Cryptocompare, the last peak of trading was during the March collapse of cryptocurrencies, when panic began in the market.

What Are Growth Hypotheses On The Market

Most often, crypto enthusiasts speculate on the growth of Bitcoin in the context of limited supply, increasing demand for cryptocurrencies, a pandemic, and growing turbulence in global markets. You can find suggestions that blocking the accounts of miners in China leads to a decrease in the supply of cryptocurrency in the market. And also the fact that the current growth is provided by the inflow of funds from institutional investors. The version is still popular that Bitcoin is a defensive asset against the backdrop of quantitative easing policy and other macroeconomic factors.

In a recent study, analysts at Chainalysis concluded that bitcoin’s current growth is indeed institutional-driven and not like the 2017 peak. Now, big players come to the cryptocurrency market to hedge macroeconomic risks.

The company notes an increase in the inflow of Bitcoin from crypto exchanges to mixed-type exchanges that support fiat currencies. They emphasize that this year compared to 2017, while the price was above $ 10,000 per BTC, there were more large withdrawals from traditional exchanges. Major experts considered operations over $ 1 million. 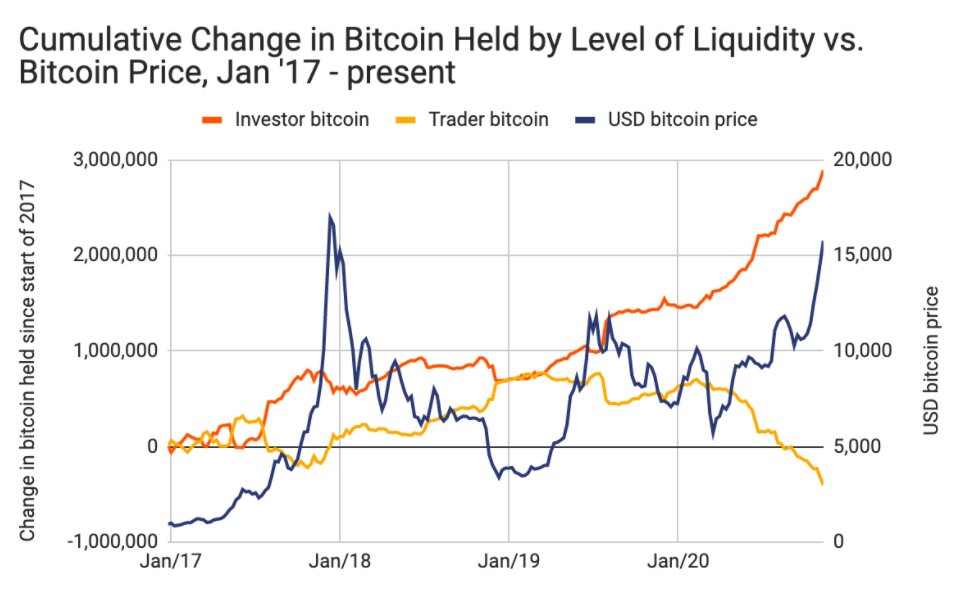 Trader PlanB also believes that institutional investors are increasingly interested in the cryptocurrency segment. In addition, he saw similarities between Bitcoin behavior after the last three halvings. 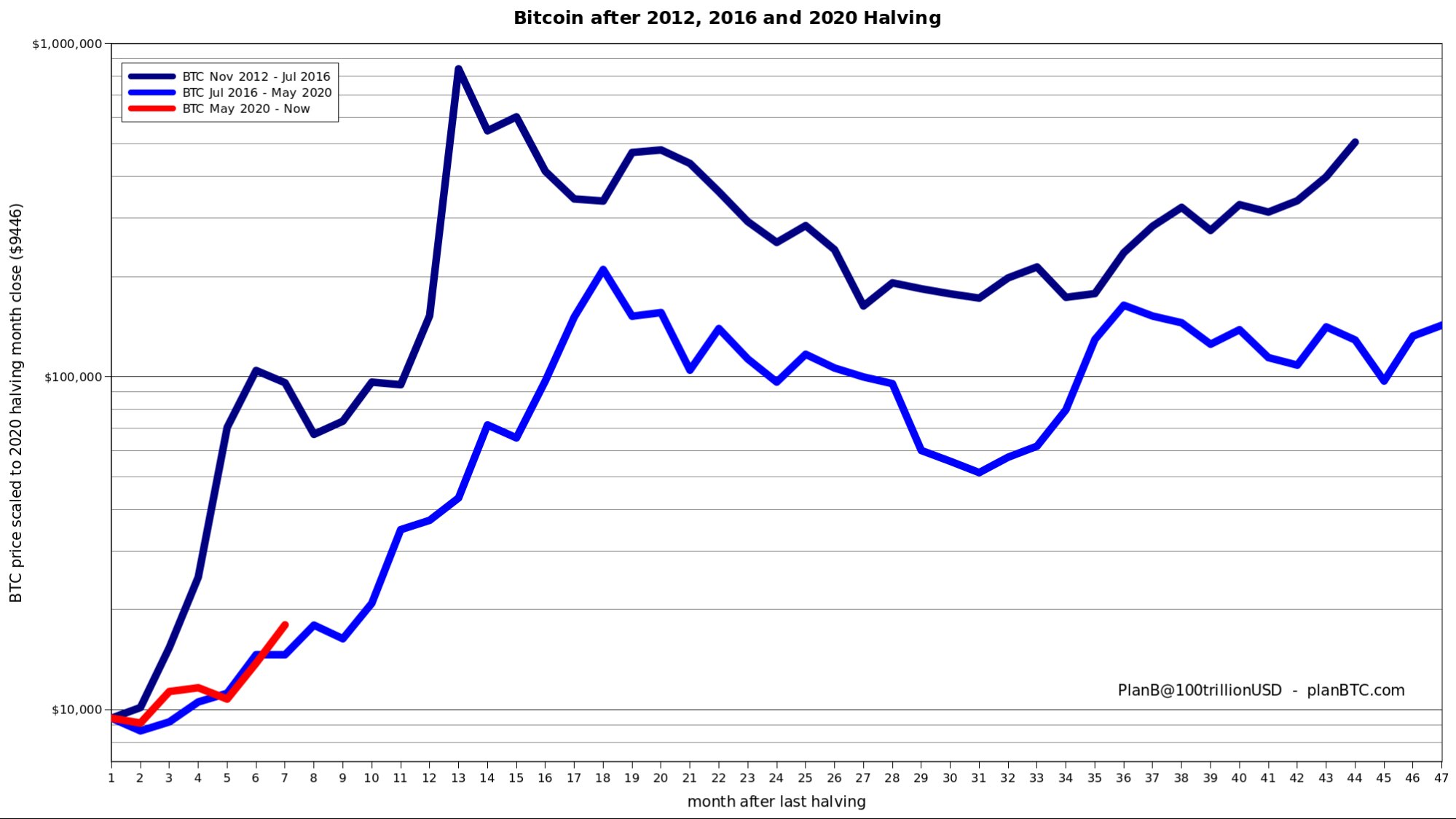 The interest of institutional investors is indirectly indicated by the growing assets under the management of crypto funds: since 2018 they have increased by 350%, and since the beginning of 2020 – by 33%. However, there are still few truly large funds on the market. Only about 5% of players manage assets of more than $ 100 million. Large American companies are also entering the crypto industry: the Fidelity Investments holding has applied to launch an investment bitcoin fund, and PayPal has announced the possibility of trading cryptocurrency and using it for payment.

One of the most popular growth theories for Bitcoin is its status as a defensive asset. However, one should be careful with conclusions. Gold is a recognized defensive asset, but the price of the precious metal and bitcoin don’t always behave in the same way.

Gold has lost 2% of its value, while the largest cryptocurrency gained 56% as of November 20. The correlation between the one-day returns of the two assets in November is 0.4. This is a statistically insignificant value, which cannot be used to draw conclusions about the relationship.

Like gold, bitcoin is well suited for portfolio diversification: it has little dependence on the traditional market. But it is worth remembering that cryptocurrency is subject to high volatility, as evidenced by the current sharp rise in value.

If we compare the price growth at the peak of 2017 and in the current period, we can see the difference in scale. Then and now bitcoin approached one mark, but then since the beginning of January, the price has increased by 1800%, and in 2020 only by 140%. The low base effect did not happen, and the current growth in terms of indicators differs from the previous one.

Other differences include lower volatility and the MVRV value indicator, as well as the lack of significant growth in bitcoin trading volume on exchanges and no mass liquidations for high leverage cryptocurrency derivatives.

Over the past three years, the industry has undergone significant changes: the derivatives market is expanding, the legal framework is being formed, the interest of institutional investors is growing, and large companies are launching new cryptocurrency initiatives. There are many forecasts regarding the future value of the asset, including optimistic ones. How exactly the international economic crisis and other events will affect the cryptocurrency market will finally become clear only over time.

Bitcoin Forecast: Correction Or Further Growth What Does Await Bitcoin In 2021: Opinions And Predictions What Is Bitcoin Network Difficulty TOP Cryptocurrencies To Invest In 2021: Ethereum, XRP, BNB, Cardano Bitcoin OTC Price Climbed Above $ 24,400 – What’s Next Step? The Volume Of Cryptocurrencies Stolen By Scammers Has Exceeded GDP of Monaco Crypto Hack: How Much Have Projects Lost In Attack Bitcoin’s Unprecedent Growth And What Future Holds For Altcoins Bitcoin’s To The Moon: $ 3,000 Growth In A Day Reboot: What Happens To The Surviving Crypto Funds TOP-5 Cryptocurrencies You Worth Buying In 2021 Project Risk Assessment Tool Was Offered To Investors In DeFi
Show more Hide