In this article, we suggest discussing the TOP 5 Bitcoin myths that prevent us from understanding the first cryptocurrency.

Firstly, miners sell BTC and thereby push the market down.

The situation when miners throw more cryptocurrency on the market than they mine is called a capitulation. This is due to the fact that they are trite work in the red.

Here is a new study according to which miners sell more BTC than they mine: 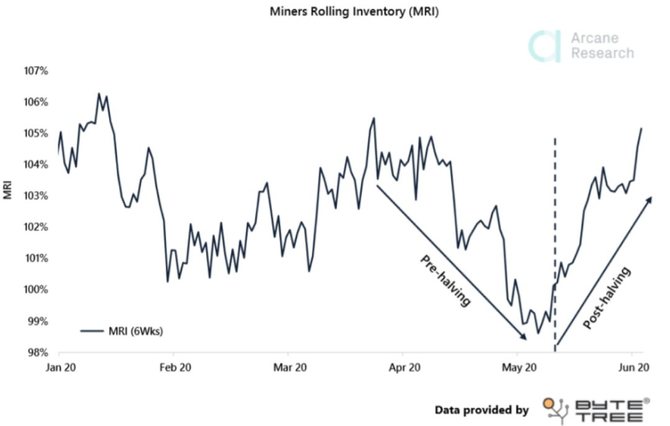 Note, this picture has been observed since the beginning of the year, before the halving itself, the miners went to zero and after it again began to sell more than they received.

To explain what is happening is quite simple. Before halving, it was necessary not only to pay for electricity but also to re-equip mining farms. That is, buy new ASIC miners that will continue to generate revenue after halving. This is what the miners did. And the growth in sales after May 11 was caused by the fact that the award decreased but the price did not show significant growth.

Therefore, the mining market is in the process of reformatting. This means that weak actors should leave the market. And we do not exclude that in addition to natural selection, there is also a hidden game when the leading miners hold the price of bitcoin in order to get rid of competitors.

Each of us constantly monitors Bitcoin rate, looks at the charts, and tries to understand which move will be next. But why are we doing this?

There are those who constantly trade in the cryptocurrency market and it is important for them to constantly be in the know. But the fact is that many people who do not trade actively but simply invest or are just looking at Bitcoin, spend a lot of time analyzing price charts.

And let each time we give an explanation that there is no reason to close the gap, but the price of bitcoin very often does this. And for this reason, we have raised the gap in the category of indicators of technical analysis. Despite the fact that in the technical analysis itself there is not a single indicator that would work with 100% accuracy.

In order to explain the phenomenon of gaps, it is enough to recall the high volatility of Bitcoin price. It moves in a very wide range, and it is not surprising that sooner or later it closes almost all gaps.
Therefore, let's make it easier to relate to graphs and remember that technical analysis is a good and useful thing, but it only gives probability, and you should never live on graphs.

We have already talked about mining, but monitoring the hash rate chart in the Bitcoin community has been raised in a separate cult. We have already said why a drop in the hashrate, regardless of its cause, can lead to a decrease in the price. That in fact, the hashrate goes for the price, and not vice versa.

Similar concerns are related to halving, and the bitcoin hash seems to have started to decline, but something seems to have gone wrong and at the moment we are almost moving towards a new record:
How to explain this situation? Here are a few options to choose from:

From a technical point of view, yes, there are even special tools for technical analysis.

But if you look in detail, it’s more correct to talk not about correlation, but about conditions in the global financial market, which includes both stocks and cryptocurrencies, which in turn lead to one or another price change.

The current story of a freezing economy and a falling market is a great chance for Bitcoin to prove that it is something more than a risky investment asset.

Your Bitcoin is a bubble pumped by Tether.

There is such an accusation and it seems quite logical. But in 2017, the USDT stablecoin capitalization was only $ 1.5 million: 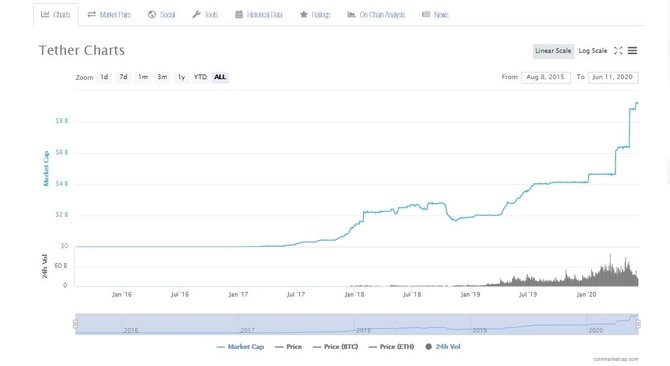 Just remember that Bitcoin is much more than someone's financial speculation.