One year ago was created the most significant and controversial Bitcoin fork – Bitcoin Cash (BCH, Bcash). Bitcoin Cash was promoted by its apologists as “digital cash”, which most corresponds to the original idea of ​​Satoshi Nakamoto, in contrast to “digital gold” with its growing scaling problems and significantly increased transaction fees.

Well-known Roger Ver and Craig Wright present Bitcoin Cash as “original bitcoin” at all. According to them, he well is suitable for daily transfers, and not just for the investment purposes. Often similar statements arouse indignation or laughter, hot discussions and cascades of amusing memes in cryptocommunity.

As you know, before the activation of SegWit, the bitcoin block size was only 1MB. When digital gold was not so popular, this restriction did not particularly affect the performance of the blockchain and did not lead to huge queues from transactions in the mempool and the growth of fees.

In April 2017, the bitcoin began grow and to attract more and more attention of masses. This, in turn, caused an exponential growth in the number of network users and an increase in transaction demand.

Approximately by May of the last year the situation mempool worsened. The commissions increased, some transactions were confirmed within several days.

To solve these problems, on August 1, 2017, the Bitcoin Cash hardfork took place, as a result of which the network of the first cryptocurrency splited into two chains. Bitcoin holders have the opportunity in a 1: 1 ratio to get the number of new coins (BCH).

The first block of the new cryptocurrency was mined by the ViaBTC pool. Its head, Yang Haipo, had previously expressed support for the “big blocks”. The size of the first block was 1.9 MB, it contained about 7,000 transactions.

After a while, the Bitcoin Cash network began to implement its own hardforks, mainly aimed at increasing productivity. So, on November 13, a hardfork was implemented, aimed at optimizing the complexity recalculation algorithm, which also suggested making the transaction confirmation time more predictable (about 10 minutes).

Soon after that it became known of intention of developers to pass to a new format of Bitcoin Cash addresses.  In particular, the solution was designed to prevent erroneous sending of BCH coins to bitcoins-addresses. Also, according to Amaury Sechet, this format would allow developers in the future “to introduce a safer way to implement smart contracts between several participants.”

In May of this year the Bitcoin Cash network hosted another hardfork to increase the block capacity. The block size was increased to 32 MB. In addition to increasing the block size and other code implementations, OP_CODES are also available, providing functionality for implementing smart contracts and other solutions.

According to the Bitcoin Cash roadmap, the next BCH update should take place in November of this year.

After all these dramatic events, many, perhaps, ask legitimate questions, such as “Did Bitcoin Cash become a digital cash promised by developers?”.

The Current Status Of The Project And Its Market Position

In particular, we will consider such indicators, important for any cryptocurrency, as the volume of transactions, the average size of fees and also a trading volume.

At the same time, Bitcoin Cash’s turnover on the exchanges is not so small. So, as of August 1, 2018 BCH occupies the fifth position in terms of trading volume, behind only bitcoin, Tether USD, Ethereum and EOS. 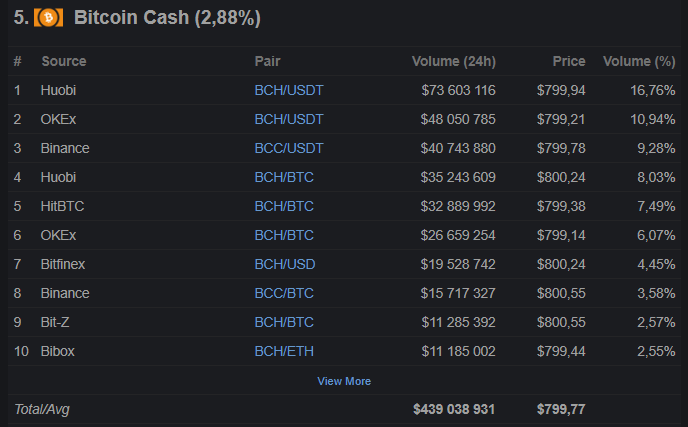 Thanks to the large block size, the developers of Bitcoin Cash, of course, managed to achieve a significant reduction in the average size of transaction commissions:

As you can see on the chart, the BCH commission is significantly lower than that of Bitcoin, Ethereum and even Litecoin. However, according to this indicator Bitcoin Cash is much inferior to Ethereum Classic, competing with DASH.

On The Verge Of Split

Quite recently the chief developer Bitcoin Cash Amaury Sechet has offered the so-called protocol of a prekonsensus which essence consists that notes agree about a general view of the block in advance, not yet knowing which node it will find.

The proponent of the proposal believes that the preconsensus will facilitate the implementation of zero-disclosure transactions that can be used for fast payments on the BCH network, as well as solve the problem that bitcoin hopes to eliminate through the Lightning Network.

In general, the proposal is designed to make the Bitcoin Cash system more reliable, and the work of the unit is more productive. Sechet insisted on the need to make changes to the code as soon as possible.

ViaBTC co-founder, Yang Haipo, spoke in favor of reducing the time to create a block in the BCH network tenfold. Thus, he believes that the block can be created every minute in the Bitcoin Cash network.

“As a representative of the mining pool, I do not see any technical problems for its implementation,” he stressed.

However, the decision stumbled upon bitter criticism from the “self-proclaimed Satoshi Nakamoto” and the head of nChain, Craig Wright. In particular, Wright stated that those who wish to support the preconfense can create a separate chain, but no one else will use this code.

This conflict was hotly debated at Reddit, whose members are actively “stocking popcorn” in anticipation of irreversible changes in the Bitcoin Cash community, which is now more than ever close to a split.

Thus, it can be concluded that the Bitcoin Cash team for the year did not bring anything radically new to the industry. Despite relatively low commissions, the daily volume of transactions in the Bitcoin Cash network is more than 10 times lower than that of Bitcoin.

It also seems a little strange that BCH, although recently its rate to bitcoin fell below 0.1 BTC, still holds in the top five of the CoinMarketCap rating.

Roger coin dips below 0.1 BTC for the first time since the April pump. #btrash pic.twitter.com/jiZ7PoHPBc

Considering not the best situation in the market, recession of activity of developers and the growing disagreements in community, long-term prospects of Bitcoin Cash will hardly seem to much iridescent.

In the same time at the first cryptocurrency everything takes its course, and the conservative weighed approach of Bitcoin Core developers gradually yields fruits. At least, bitcoin — still undisputed leader of the market, its capitalization exceeds a similar indicator of Bitcoin Cash ten times.

What Will Happen to Bitcoin When Miners Mine All BTC