Best Cryptocurrencies 2021: Which Coins To Invest In In April

Today we will talk about Ethereum, Cardano, Chainlink, Litecoin and five more coins, which in the near future may show growth faster than the crypto market.

Let’s analyze the latest cryptocurrency news due to which the altcoins from the list will bring tangible profit to their owners.

Ethereum is at the first place in our selection today. It was recently confirmed that the Berlin update will take place around April 14th:

This is one more step on the way to the scability of Ethereum blockchain, but not yet cardinal. In fact, everything will remain as it is now, but it will get a little better. Much more hope is caused by the news about the imminent launch of second-level solutions, the count goes on for weeks, with the help of which the blockchain bandwidth will grow 100 times at once. This is really cool.

But there is more than good news. Most miners disagree that there will be another hard fork in the summer. During it, a rule will be introduced for the partial burning of commissions. This will reduce emissions and in the long term should help the price rise, but here and now miners will lose part of their income. To show their disagreement, a strike of miners is planned for April 1, they will seize 51% of the network capacity for 51 hours:

It is not yet clear whether this is such an April Fool’s joke or whether there really is a serious conflict in the community.

Moving on to the second coin and here we have Cardano. On March 1st, an important update took place, the function of creating custom tokens was added. On this news, the cryptocurrency broke into the TOP-3 in terms of market capitalization, but then a natural pullback followed. After just 8 days, 591 tokens were issued on the network:

591 assets minted on Cardano and it's only been 8 days. It's going to be fun seeing this grow over the next few months: https://t.co/dOlwwNt15A

There is already a dedicated website where you can track assets on the Cardano blockchain. The rapid development of this ecosystem can return the coin to growth, especially after the next upgrade to add smart contracts is announced. It seems like there are only a few months left.

And in third place we have Litecoin. Historically, digital silver has shown a high correlation with bitcoin, and now more and more analysts believe that it is Litecoin that could be the next coin to shoot sharply. And let’s remind other news: on March 15, the code of anonymous transactions in Litecoin on the MimbleWimble protocol should be presented.

Chainlink is at the 4th place. In a recent report, analysts at CitiBank predicted a great future for bitcoin, calling it almost the new global currency. These guys believe that the LINK token will also go far and at the moment it may become more famous than Bitcoin. The bet is that more and more blockchains are connected to the Chainlink oracle system, and the further this process goes, the more demand the LINK token will become.

Among other tokens are Polygon, previously called MATIC, Skale Network, and SushiSwap. We think there is no need to explain to anyone what the magic of the Coinbase crypto exchange is. All assets on its listing are showing impressive growth and these three coins will be added soon. In addition, it is logical to expect an increase in the magic of Coinbase, because the crypto exchange is getting closer to becoming a public company through a direct listing of shares on the Nasdaq stock exchange. In the pre-market, the company was valued at as much as $ 90 billion.

In the penultimate place is the new DeFi called Cook Protocol. You won’t find it anywhere yet, and it seems highly suspicious. But the Cook Protocol promises an early token sale and then listing on Uniswap.

We have received investments from duckDAO, it's an honor to be part of the most eminent community-based incubator! #COOK #CookProtocol $DDIM $DUCK https://t.co/BJrwunXwy4

And closes our today’s selection the altcoin Chiliz. It is a football tokenization platform with which many world-class teams are already collaborating. Recently, the coin grew by 60% and reached a capitalization of $ 1 billion. It would seem that this is the ceiling, but then there was a second round of growth and the capitalization today exceeds $ 2 billion: 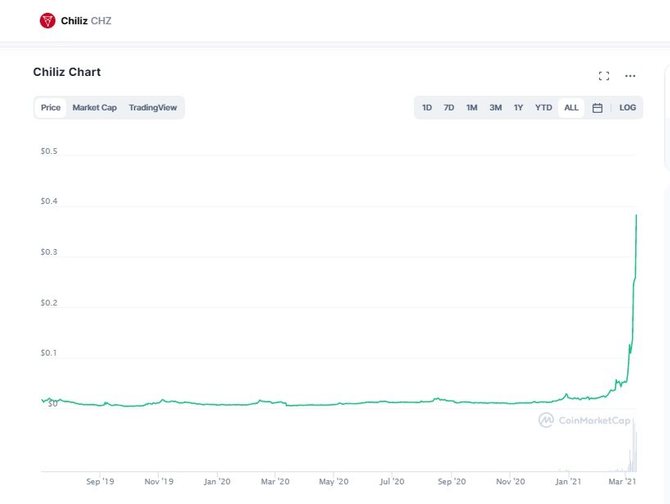 Can the price go even further? Analysts from Santiment are confident that all coins from the NFT token sphere have not yet reached their maximum:

Many speculators of the growing #NFT industry are opting to get exposure in NFT-related tokens like $CHZ, $FLOW and $ENJ. #Enjin in particular, #Enjin has nearly tripled in value over the past week. With the price peaking at ~$1.91 yesterday, we've taken a look at the asset's new pic.twitter.com/7K5HGQSZH6

Why Is Correction A Good Thing For The Crypto Market?