9 DeFi Tokens That Could Skyrocket In 2021

Today we will look at 9 altcoins that belong to DeFi sector and can show an explosive rise in price at any moment. We will consider the following projects: Uniswap, Curve Finance, Polkadot, Solana, Matic Network, Yearn Finance, AirSwap, Loopring, Elrond.

Note that a number of these projects set the main goal to solve the problem of Ethereum blockchain scaling in order to reduce the cost of transaction fees. There is also news that indicates the possibility of forming a new financial paradigm based on decentralized finance.

The first place takes UNI token from the most popular decentralized exchange Uniswap.

A report from Federal Reserve Bank of St. Louis should help this growth:

This is not a joke, a real bank is studying the decentralized finance market and predicts that it will continue to grow, and almost exponentially. And in the future, we may come to a complete change in the financial paradigm.

Curve Finance project takes the second place of rating. The project’s network will be added to the Polkadot parachain. There both projects will create stablecoins, as well as tokenize other cryptocurrencies, such as Bitcoin and Ethereum. These assets will then be used to provide liquidity in decentralized markets.

Among news that can help the growth of DOT coin is the investment of Binance crypto exchange in the development of the Plasm Network based on Polkadot in amount of $ 2.4 million. This will be a separate parachain, which should become the solution of the second layer for Ethereum. In other words, the effort makes it possible to pay low fees for transactions and speed up their processing. Because Ethereum 2.0 is not coming soon, and the fees is already on average $ 24 per transfer and I don’t want to pay them at all.

Note, Solana platform has announced a $ 200,000 hackathon for decentralized application developers. The event will take place from February 15 to March 1, which should bring new ideas to the development of the entire project as a whole. In addition, a bridge for porting tokens to Ethereum network and integration with the Chainlink oracle system is already being launched. This effort is supported by one of the leading cryptocurrency exchanges FTX.

In fifth place is Matic Network, which decided to rebrand Polygon. But this is not important. The developers of the project announced a new course, they said so, we go all-in.

The goal is to create a second layer solution for Ethereum, which will allow it not to lose in the competition with Polkadot.

The price of this token already seems to be too overbought: 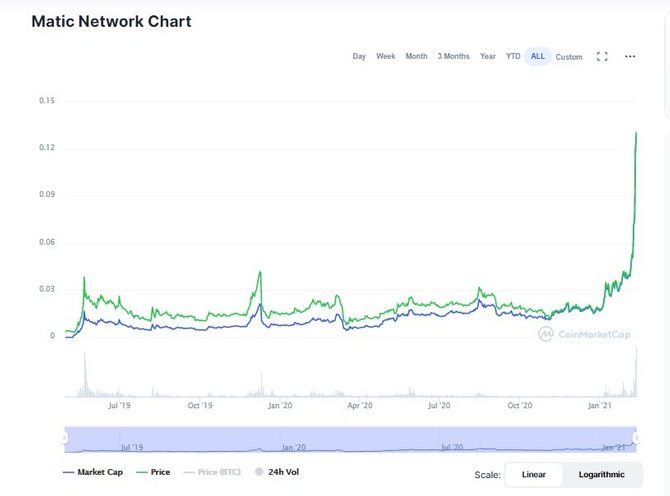 As you know, the higher the growth, the greater the risk of entering the project. But this does not mean that it has no further growth prospects, because the price and capitalization are relatively small, based on the issue.

Yearn Finance project is that coin that at cost more than Bitcoin one time, and, perhaps, this story will repeat itself.

This skyrocket is possible despite the attack was carried out on Yearn Finance, as a result of which users lost $ 11 million. The developers thought for a long time, but nevertheless decided to compensate for all losses and warned that in the future they can count on compensation only those who buy special insurance. Interesting requirements in the world of decentralized finance, but the conflict is settled anyway.

Let’s add that recently Yearn Finance community voted to increase the issue by 6,600 coins to fund the further development of the project. New coins have already been issued and distributed, with the current YFI price of $ 34,000.

We dive into the depths of the crypto market and find AirSwap there. This project of which is still at the bottom, but everything may soon change. Ethereum Consensus, a leading ecosystem development company, has announced a massive upgrade of the project. After that AirSwap will be able to solve all the problems that arise when working with decentralized markets. An ambitious statement, let’s see what comes of it.

We return to TOP-100 cryptocurrencies and find the Loopring token there.

The team also decided to take seriously the problem of scaling Ethereum and promise to reduce fees to 0.1% of current values. The network has already been tested and in the first day of operation, 40,000 transactions passed through it, which is approximately 3% of the total workload of Ethereum.

If they succeed and this indicator continues to grow, then the token of the project itself has a good future.

The ninth final place is the Elrond project.

Now we can see strong pressure from sellers on it, many want to take profits and this is normal.

Does Elrond have a long-term perspective with new price increases? We think so, but it will depend on various factors, such as the state of the crypto market as a whole, and the actions of the development team. Therefore, those who intend to continue to hold this coin, we advise you to conduct a thorough analysis and weigh the pros and cons.